StevoR left us some treats in the Withdrawing Room:

Stick with that first photo – its an animation with some pretty impressive reality in it.

Hope these are interesting & informative for folks here.

CN: Talk of spousal murder. And Nazis.
…
You know what I’d do if I were compulsively obsessed to fine-parse the ideas and beliefs of a certain group of people in order to find them guilty-by-association? I’d start looking for links to the works of Louis Althusser – because while the work of Althusser may have been picked up and expanded upon by some feminists, the guy strangled his wife to death. (And let’s not forget debate over his supposed turn towards neo-conservatism in his later years).

Then I’d start looking for links to Heidegger… because, well… Godwin’s Law. The work of Heidegger, and its derivatives (i.e. a lot of Left Bank philosophy) do turn up in theory in the Humanities, and not at all infrequently. It’s also become increasingly clear in recent years that no, his work isn’t entirely disentangled from the the politics of his friends in the jack-booted Halloween costumes. END_OF_DOCUMENT_TOKEN_TO_BE_REPLACED 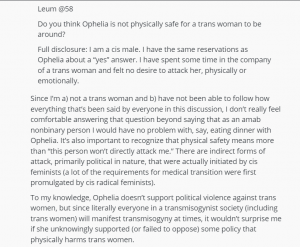 END_OF_DOCUMENT_TOKEN_TO_BE_REPLACED

Hey kids, let’s have a museum of women’s history!

What shall we put in it?

I know! Jack the Ripper! END_OF_DOCUMENT_TOKEN_TO_BE_REPLACED

A young woman has spoken of her “living hell” as her abusive ex-husband was jailed for life with a minimum of 28 years for shooting her mother as an act of revenge.

Tariq Rana, 31, travelled from his home in Wolverhampton to Pakistan intent on tracking down relatives of his 28-year-old wife Ayesha Riaz, who split up with him a year after their arranged marriage.

So for that he killed her mother. For a wound to his precious ego, he killed the mother of the woman who didn’t like being married to him. I like my ego as much as the next person, but I don’t kill people to avenge slights to it.

He shot his mother-in-law, Ghulam Asia, at her house in Lahore with an unnamed accomplice, dressed as a delivery man. END_OF_DOCUMENT_TOKEN_TO_BE_REPLACED

Nimisha Jaiswal points out that witches are not a form of cosplay in India.

Last week, a mob of 200 people in the Indian state of Assam dragged a 65-year-old woman out of her house, stripped her and beheaded her with a machete. They did so because a self-proclaimed “goddess,” who asked them to gather at a local temple, proclaimed that the woman was a witch and would bring bad luck and illness to the village.

In a country teeming with IT graduates and higher-education institutes, such attacks are sadly and strangely common. Ninety people in Assam, a majority of them of them women, lost their lives in the last six years because they were branded as witches. According to the National Crime Records Bureau, 2,097 murders between 2000 and 2012 were committed when the victims were accused of practicing witchcraft.

END_OF_DOCUMENT_TOKEN_TO_BE_REPLACED

I can’t figure out what I think about this. I just go on a parade of “on the other hands” that never end up at a settled opinion. I do that a lot. I’m not very good at resolving ambivalence. That’s a problem when you have to make a decision – when you’re a judge, for instance – but I don’t think it’s entirely bad when you’re just thinking. It’s not always terrible to see merit on both (or several) sides of an issue. One of the things that annoys me most about the current campaign to expel me from the Community of Good People is the fervent loathing of ambivalence.

The “this” is the prosecution and conviction of Oskar Gröning for crimes against humanity.

Oskar Gröning is a 94-year old German who came to public attention ten years ago when he appeared in a BBC documentary to refute Holocaust deniers; as a former member of the SS, he verified the existence of the Auschwitz gas chambers.  Gröning, a trained bank clerk, had joined the SS as a 20-year old in September 1942; he was assigned to remove the luggage from the loading ramps of the train station at the Auschwitz- Birkenau camp and to count the bank notes in the luggage and send them to the Reich security office in Berlin.  Gröning was not accused of any violence against those incarcerated.

END_OF_DOCUMENT_TOKEN_TO_BE_REPLACED

Glosswitch says sex education should include teaching boys not to be sexist. That seems reasonable.

I am a mother of sons and the thought of them growing up within a culture of rampant male sexual entitlement terrifies me. Right now they are six and seven – still innocent, still able to see their female peers as fellow humans – but as adolescence approaches, I fear that a deluge of misogyny will engulf them as they encounter the adult world and so-called “normal” attitudes to sex.

I am very much in favour of them being granted access to as much accurate, open-minded sex education as possible. Nonetheless, I doubt such teaching will ever be effective as long as we are in denial about the real problem: the widespread, culturally sanctioned dehumanisation of women as the price for male sexual gratification. END_OF_DOCUMENT_TOKEN_TO_BE_REPLACED

At Slate, a piece titled Why I’m Still a Butch Lesbian.

(Me, I would just call them clothes. I wear jeans – black ones when I need to clean up – and T shirts or turtlenecks, sweatshirts or sweaters. I don’t think of them as men’s clothes. Then again I don’t wear neckties – I guess I do think of them as men’s clothes. Why? Well…uh…I guess because I don’t wear them. Is this a little bit circular?) END_OF_DOCUMENT_TOKEN_TO_BE_REPLACED

As timgueguen said (and despite the common elements in our nyms we are not the same person), the Duggars have a real estate business that Jim Bob took over from his mother, and they’ve parlayed it into a portfolio of income-generating commercial real estate, including a cell tower.

Jim Bob also ran a used car lot and a towing business – a good pairing. A used car lot arranges high-interest loans for buyers with lousy credit (profitable), the cash down payment made before the car’s driven off the lot usually covers the dealer’s costs, any payments the buyer makes are profit, and if a buyer fails to make the payments, the tow truck’s perfect for repo’ing the car, which can then be re-sold. It may not have the summer-in-the-Hamptons cache of a hedge fund, but it’s a pretty shrewd small business strategy.

The Duggars set up their eldest son, Joshua, with a used car lot of his own that floundered and got sold to a chain at the time he headed off for his short-lived career as a fundie activist in Washington. The second son, John-David, got the towing business, but wanted to become a pilot. Hence, Duggar Aviation (yes, really) now owns two planes available for charter, and a another son is training to be a pilot, too. The Duggars have set these enterprises and others up as a series of small LLCs, so if one fails, it doesn’t take down the others, and base the businesses’ administration in the same little home office to keep overhead minimal. END_OF_DOCUMENT_TOKEN_TO_BE_REPLACED