When a meme becomes popular, we often say that it has gone “viral”. This word suggests that memes become popular by being particularly infectious. In analogy to epidemics, a particularly viral meme hits a critical threshold where it just won’t die, because each new infection spreads it to even more people.  But is this epidemic model actually true?

A paper titled “The Structural Virality of Online Diffusion” puts into question the very idea that popular memes are viral. They point out another mechanism by which memes can become popular: the broadcast. Rather than infecting multiple generations of followers, a meme may become popular simply by infecting one person with a lot of followers.

Figure 1 from the paper. The tree on the left illustrates a broadcast, while the one on the right illustrates viral spreading.

The paper considers a massive amount of Twitter data to determine whether the most popular links are broadcast-like or virus-like. On average, they more resemble broadcasts, but there is a huge amount of variation.
END_OF_DOCUMENT_TOKEN_TO_BE_REPLACED

“Sexual racism” is racial discrimination against potential sexual or romantic partners. Sexual racism is very common among gay & bi men. The hookup app Grindr is notorious for the many profiles that say upfront, “no femmes, no blacks, no asians.” I’ve also heard several terms for gay & bi men who prefer partners of a particular race–“rice queen” being particularly frequent in my area.

Normally, when I talk about gay & bi men, I avoid contrasting straight people, because sometimes straight people complain they have it just as bad, and what do I know? But when it comes to sexual racism, research backs me up in saying it really is worse for gay & bi men.

Many defend sexual racism by saying it is a personal preference. Some say that it is a preference determined by biology, similar to gender preferences. Others say that even if racial preferences are culturally determined, they aren’t amenable to moral condemnation because preferences too difficult to change.

I’m skeptical of these defenses, but I’ve never personally used any dating or hookup services. So today, instead of relying on my personal experiences, I’ll rely on social science. Today I’ll briefly discuss the paper, “Is Sexual Racism Really Racism? Distinguishing Attitudes Toward Sexual Racism and Generic Racism Among Gay and Bisexual Men“.
END_OF_DOCUMENT_TOKEN_TO_BE_REPLACED

At March Meeting, there was a fascinating talk about the phase diagram of ribbons.  Yeah, just like the solid/liquid/gas phase diagram of water!  Their paper is called Helicoids, Wrinkles, and Loops in Twisted Ribbons (see on PRL if you have journal access).  Here’s the first figure: 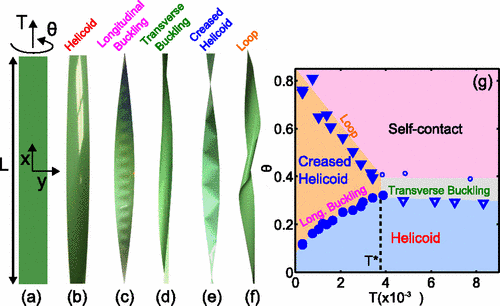 Left side: many possible responses of a stretched and twisted ribbon.  Right side: a phase diagram of the ribbon as a function of stretching force (T) and twisting angle (θ).

The researchers claim, “Our results can be used to develop functional structures”.  I don’t know what that means, but I’m already sold!  I am going to replicate this experiment!