This is a repost of an article I wrote in 2014.  Relevant to my recent review of the Sokal paper.  Note that the blog Scientia Salon is now defunct.

Massimo Pigliucci started a new blog Scientia Salon, which is already bearing fruits.  I enjoyed this essay by Alan Sokal (yes, that Sokal) about academic postmodernists and extreme social constructivists.  In the 80s and 90s there were many such academics claiming that science was entirely based on prejudices.  Interestingly, Sokal claims that they have now backed off from the most extreme views, particularly because they were upset at the way the Bush regime used postmodernism to justify its anti-science policies.

Sokal’s primary citation for this is “Why has critique run out of steam? From matters of fact to matters of concern” by sociologist of science Bruno Latour in 2004.  I thought it was worth a read.

What has become of critique when my neighbor in the little Bourbonnais village where I live looks down on me as someone hopelessly naı̈ve because I believe that the United States had been attacked by terrorists? Remember the good old days when university professors could look down on unsophisticated folks because those hillbillies naı̈vely believed in church, motherhood, and apple pie? Things have changed a lot, at least in my village. I am now the one who naı̈vely believes in some facts because I am educated, while the other guys are too unsophisticated to be gullible: “Where have you been? Don’t you know that the Mossad and the CIA did it?” What has become of critique when someone as eminent as Stanley Fish, the “enemy of promises” as Lindsay Waters calls him, believes he defends science studies, my field, by comparing the laws of physics to the rules of baseball? What has become of critique when there is a whole industry denying that the Apollo program landed on the moon? What has become of critique when DARPA uses for its Total Information Awareness Project the Baconian slogan Scientia est potentia? Didn’t I read that somewhere in Michel Foucault? Has knowledge-slash-power been co-opted of late by the National Security Agency?

Of course conspiracy theories are an absurd deformation of our own arguments, but, like weapons smuggled through a fuzzy border to the wrong party, these are our weapons nonetheless. In spite of all the deformations, it is easy to recognize, still burnt in the steel, our trademark: Made in Criticalland.

Latour uses an extended war analogy, although it’s not clear who he thinks his enemy is.  It’s something something capitalism something.  He talks about reassessing our tools of war as the times change, which seems to really mean changing his epistemology to better fit the conclusions that he had already decided on.  He only knew his epistemology (ie scientific facts are purely social constructs) was wrong when other people used the same epistemology to come to conclusions he didn’t like.

But okay, his epistemology was terrible, so it’s probably a good thing if he gets rid of it.

A third of a way through the paper, it takes a sudden turn towards the incomprehensible.  I found it so baffling, that my mind could only interpret it as a series of non sequitur jokes.  So I laughed.  I feel the same way I do about many an unwanted commenter on my blog.  “It’s not that I disagree with you, it’s that I literally don’t understand what I would be agreeing or disagreeing with!”

It begins with Latour introducing his solution to critical theory’s problem:

What I am going to argue is that the critical mind, if it is to renew itself and be relevant again, is to be found in the cultivation of a stubbornly realist attitude—to speak like William James—but a realism dealing with what I will call matters of concern, not matters of fact.

Curiously, “matters of concern” and “matters of fact” are crucial to Latour’s thesis, but they are not immediately defined, nor ever defined.  I can only guess at the definition based on contextual clues scattered throughout the article.

This is immediately followed by a long discussion of Heidegger’s distinction between objects and things.  (I can see why Heidegger is famous for being so opaque, even compared to other philosophers.)  A handmade jug is a thing (which is a celebrated category), while a can of Coke is merely an object.  On first glance it sounds like Heidegger is merely conveying his prejudices, his romanticization of handmade objects.  Latour appears to agree.

But rather than dismissing the distinction between objects and things, as I would, Latour argues that objects and things have been complicated in the modern era.  For instance, when the space shuttles Challenger and Columbia had their disasters, they transformed from objects into things.  I don’t know what conclusion Latour draws from this, because I cannot make sense of how he describes his conclusion:

My point is thus very simple: things have become Things again, objects have reentered the arena, the Thing, in which they have to be gathered first in order to exist later as what stands apart.

Latour goes on to describe the current state of critical theory:

We can summarize, I estimate, 90 percent of the contemporary critical scene by the following series of diagrams that fixate the object at only two positions, what I have called the fact position and the fairy position—fact and fairy are etymologically related but I won’t develop this point here. The fairy position is very well known and is used over and over again by many social scientists who associate criticism with antifetishism.

To Latour’s credit, he at least immediately said what the fairy position is (it’s something very well known?), though I don’t understand his definition.  I’m not sure why it is necessary to observe the etymological relation between fact and fairy–perhaps in Criticalland, unlike anywhere else, etymology is destiny? 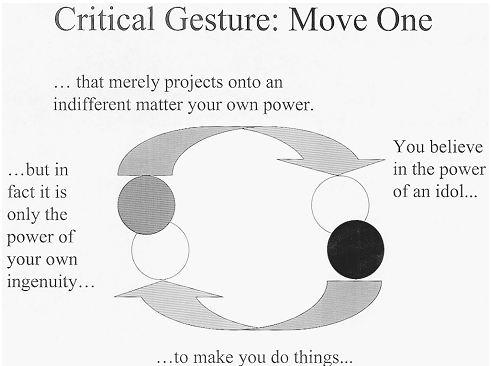 Figure 2: I think that the dark circles represent “facts” and the white circles are “fetishes”.  I think the circles on the left might be the “fairy” position, and the ones on the right the “fact” position?  I’m honestly not sure.  This is the first in a series of diagrams, none of which have captions.  I’ll spare you from the others.
Latour goes on and on about this.  But to be honest I couldn’t read the whole thing, because at this point my palm was in the way.  I’m not saying that Latour’s article is nonsense because it’s incomprehensible–papers in my own field, condensed matter physics, are also notoriously impenetrable.  But I get the sense that the underlying things being described are rather simple, and that nothing really justifies being so opaque.
Gerrymandering in the US » « Why isn’t homosexuality (or religion) a mental disorder?