Bell’s Theorem considers a particular thought experiment, in which two electrons are emitted simultaneously from a single source in opposite directions. This source emits electrons that are “entangled”, meaning that their quantum states are correlated with one another. If you perform the same measurement on both electrons, both measurements will always produce the same result.1 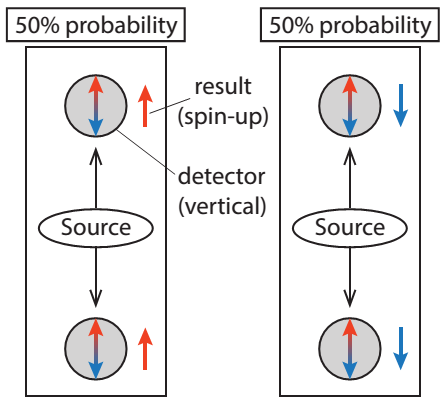 The particular thing we want to measure is the electron’s spin.2 Electron spin is quantized; if you measure the spin in the vertical direction, you will either measure +1/2 or -1/2 (in the appropriate units), and never anything between. If the result is +1/2, we call it spin-up, and if it’s -1/2, we call it spin down. You can also measure the spin in the horizontal direction, and again you will always measure +1/2 or -1/2.

Now, you may have heard that in quantum mechanics, it is impossible to know both the position and momentum of a particle. This is a common occurrence in quantum theory, when it is impossible to make two measurements at the same time. This is true of horizontal spin and vertical spin. You can measure the vertical spin of an electron, and you can measure the horizontal spin, but you can’t measure both at the same time.3

While we cannot measure both the horizontal and vertical spin of a single electron, we can do the next best thing, and measure two entangled electrons simultaneously. Preferably these measurements are performed sufficiently far apart that no information can be exchanged between electrons without traveling faster than light. And furthermore, we don’t need to restrict ourselves to horizontal and vertical directions, we can make our detectors freely rotate to any angle. In particular, we consider three configurations, with angles 0 degrees, 45 degrees, and 90 degrees from vertical. 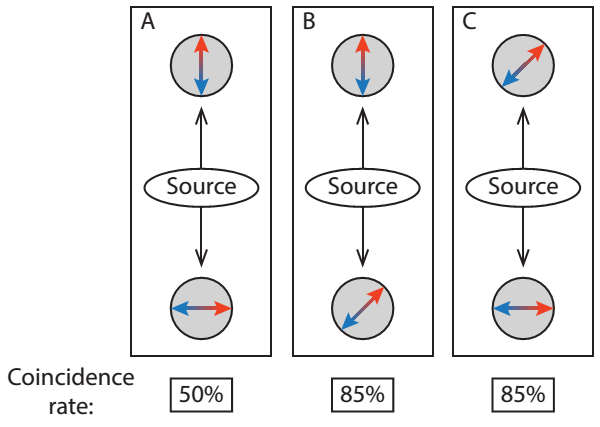 These eight possible states can be summarized in the Venn diagram below. 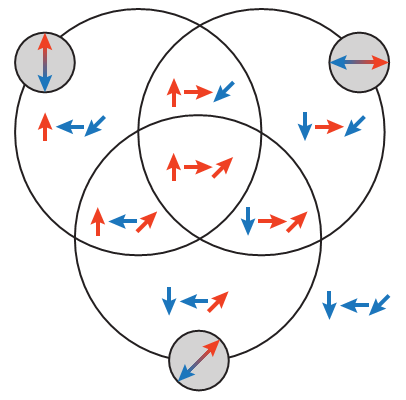 Fig. 3: A Venn diagram illustrating eight possible hidden variable states that an electron may have in the Bell’s Theorem thought experiment.

If you measure both electrons in the same direction, then they produce identical results. This indicates that both electrons are in the same section of the Venn diagram, although we don’t know exactly which section that is. In fact, we don’t even know what the probabilities are for each section. Since we can only measure two of the circles of the Venn diagram at a time,4 we will have to do some sleuthing to find out.

However, if you go through the sleuthing, you will find that the probabilities don’t make any sense! This can be illustrated in a single picture (Fig. 4 below), using the coincidence rates predicted by quantum theory (shown in Fig. 2). 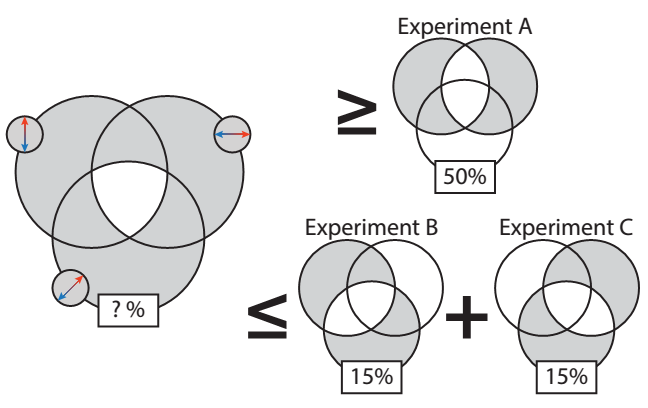 Figure 4 shows a contradiction. The shaded region of the leftmost Venn diagram must be at least 50%, but also no more than 30%. It cannot be both!

Our paradox arose from a number of different assumptions, so we can conclude that at least one of those assumptions was incorrect.  Let’s review our assumptions.

First, we assumed that the quantum theory predictions are correct. Of course, it may be the case that when you reproduce Bell’s thought experiment with a real experiment, quantum theory turns out to be wrong. However, a number of such experiments have been performed, always confirming quantum theory.

Second, we assumed that the electrons cannot affect each other, since they’re far apart and the measurements are simultaneous. This assumption is called “locality”.

So the conclusion is that any hidden variable theory must be nonlocal.5 You can have hidden variables, but if you do, then particles must exchange this hidden information at speeds faster than light.

This is unsatisfying, because under relativity theory, nonlocality implies travel backwards through time. It brings to mind experiments where you send a message back in time that kills your grandfather. Of course, you can’t actually do that, because the only thing that travels back in time is hidden information that can never be uncovered by any experiment. Even so, what exactly is carrying this information, and what rules govern it? As de Broglie-Bohm theory shows, nonlocal hidden variable interpretations are possible, but understandably not very popular.

[Next up: the Kochen-Specker Theorem]

1. Strictly speaking, the entangled electrons could also be anti-correlated with each other, always producing opposite results. However for simplicity I’m considering positive correlation. (return)

2. A note on experimentally measuring electron spin: it’s very difficult. There’s a spin detector in our lab, and its operation is the subject of a former student’s dissertation. In practical realizations of the Bell’s Theorem thought experiment, they use light instead of electrons, and measure polarization instead of spin. However, I’m sticking to electron spin for simplicity of the explanation. (return)

3. What you can do is measure horizontal spin and vertical spin in succession, but that’s different, since the first measurement changed the quantum state of the electron. If you measure a single electron’s vertical spin twice without measuring anything between, then you will always get the same result both times. However, if you insert in the middle a measurement of the electron’s horizontal spin, then the results will be completely uncorrelated. (return)

4. One thing that long puzzled me about the Bell’s Theorem is that it seems like you could prepare not just two, but three entangled electrons. You could then perform all three measurements simultaneously, determining exactly where the electrons appear in the Venn diagram. However, it turns out that this is not possible. While you can indeed prepare three entangled electrons perfectly correlated in the vertical direction, you will find that they are no longer perfectly correlated in the horizontal direction. The proof is easy for anyone with a physics background, but the rest of you will have to trust me. (return)

5. Of course, theoretical physicists have been prodding Bell’s Theorem for decades, so some of them have come up with other assumptions of the theorem which could be rejected in place of locality. I include this footnote as a shout out to the pedants looking for an opportunity. (return)