This is Figure 2 from Ref. 3, showing the fraction of people who continue to have PTSD after the indicated number of months. People who get treatment (solid line) are 50% likely to recover after 3 years, and people who don’t get treatment are 50% likely to recover after 6 years. About one third seem to never recover. This means that PTSD treatment should not just focus on recovery, but also on living well alongside PTSD.

Common examples of trauma include rape, live combat, and living through a major accident or natural disaster. Obviously any of these are bad on their own, but add to that the probability of PTSD, which may potentially affect the person for the rest of their lives.

Now, the probability that someone exposed to trauma will suffer from PTSD is thankfully low. According to the NCS,[3] only 17.9% of those exposed to trauma have ever suffered from PTSD. However, this number breaks down, because it depends on the kind of trauma in question. Thus when newer editions of the DSM redefine trauma, the percentage may change.

I would have liked to give numbers for how likely men and women are to suffer from PTSD given any trauma type. Unfortunately, the numbers are not available in the studies I read, because of methodological limitations. Most people who have been exposed to trauma have been exposed to more than one trauma. The standard method of dealing with this is to ask people to single out the worst trauma that they’ve experienced, called the “index event”. The rest of the questions are answered in relation to the index event. This overestimates the rate of PTSD, since the index event is more likely to cause PTSD. 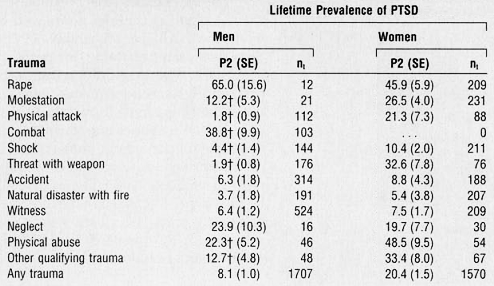 Nonetheless, here are numbers from Ref. 3, Table 4 (edited to remove some extraneous information). P2 is the likelihood that someone who picked a particular trauma type as their index event also suffered from PTSD associated with that event. The parentheses indicate standard errors. The column labeled “n” shows the number who chose a particular kind of trauma as their index event and had associated PTSD. As you can see, rape is the most likely kind of trauma to be associated with PTSD, although combat and physical abuse are also up there.

Another interesting factoid: the likelihood of women to experience rape was 9%, where for men it was 1%.[5] But probably there are better studies to find such estimates–the NCS used a relatively restrictive definition of rape.[6] FYI, I do volunteer work for a survey and rape is one of the things we want to ask about. It makes me feel better that our amateur survey can at least do better than the National Comorbidity Survey, but this should make literally no one else feel better.

On a final personal note, I’m male, have been sexually assaulted a few times, but have not ever had PTSD. I’ve seen a lot of people assume PTSD is the only way to respond to sexual assault, which is annoying. But probably not nearly as annoying as PTSD would be, so there’s that.

1. For more details, see the DSM-5 fact sheet on PTSD. But note that all the papers I read use diagnostic criteria from earlier versions of the DSM. (return)

6. The NCS’s definition of rape is “someone had intercourse with you when you did not want to by threatening you or using some degree of force”. A lot of rape involves coercion, implicit threat, or intoxication, and I’m not convinced that survey respondents would recognize their experiences under this definition. (return)

What is a safe space? » « Virtue signalling is not pretending