I will be speaking to Lincoln Atheists on April 24th at 1 pm CST and Cleveland Humanist Alliance on May 11th at 7pm EST. Looking forward to reading some poetry and meeting new people!

I’ve always liked this one…

Ivory giggles and pink powder secrets
power an endless charade.
Let it all hang out
between the pews.
Just once
let the cold stares
see your delicate pearl.
Let lace and tumbleweed
caress your bare skin.
Let your fellow parishioners
blush with envy.
Let reality swallow you whole,
and you’ll realize
you don’t need to look to the skies—
satisfaction is found right here on the ground.

I have been contacting various groups looking for speaking engagements to promote my recently released poetry book. To my surprise, I’m actually having a lot of fun with it. I’m shy and definitely not a “people person”, but I’m becoming pretty comfortable with Zoom meetings. I’ve met a lot of nice people and some have helped me along the way.

Anyway, I had been contacting atheist groups through the affiliates page on the American Atheists website, and after a while, I felt like I was hitting dead ends. My publisher suggested I try contacting humanist groups. I contacted a few groups today and I’m excited to see if they respond.

Humanism is a somewhat new concept to me. I only learned of the term a couple years ago after seeing a post on Facebook. I was immediately a fan of the AHA slogan, “good without a god”. That’s exactly how I feel about life and how I want to live. I’ve always called myself an atheist first but considering my actions and outlook, maybe humanist is a better description of who I am.

What do you consider yourself? Atheist? Humanist? Agnostic? Secular? A combination? I’m curious and I’m sure there are more terms.

Happy Easter to all those celebrating in some way shape or form! We had an egg hunt and lots of chocolate. Thankfully the weather is nice here today and we were able to spend some time outside.

My daughter has been super excited about Easter. They had a party at her daycare last week and she really had a good time. She said it’s now her favorite holiday.

My daughter decided that she wanted to get our family members Easter cards. We went to the store and she picked them out herself. Most were flowers or bunnies but then she picked out a card with a Noah’s Ark scene. She doesn’t know what Noah’s Ark is. She just saw cute animals and a rainbow and thought it was pretty. So we went with it. We bought the card and she gave it to my sister and her wife.

Will there ever be a time where I need to explain this stuff to my daughter? Why do people celebrate Easter and what’s Noah’s Ark? At the moment, my husband and I avoid anything religious with our daughter, but will there come a time when we should tell her about popular bible stories or meanings of holidays — for common knowledge or maybe from a cultural or historical aspect?

I have been so very careful with my daughter. I’ve always thought that religion preys on young people and I want my daughter to be free. She hasn’t asked any questions and I avoid bringing it up. She will be five at the end of the month and hasn’t had any exposure to religion, but I know that might change as she gets older.

Is it better if I say something first before she’s exposed to religious people or do I explain as we go — answer her questions as they come up?

Will she have any questions at all? Maybe it won’t be a big deal.

But I assume at some point I should tell her the basics. When? What should I say?

My family just spent a few days in West Virginia. Here my daughter and I pose in front of the Ohio River. 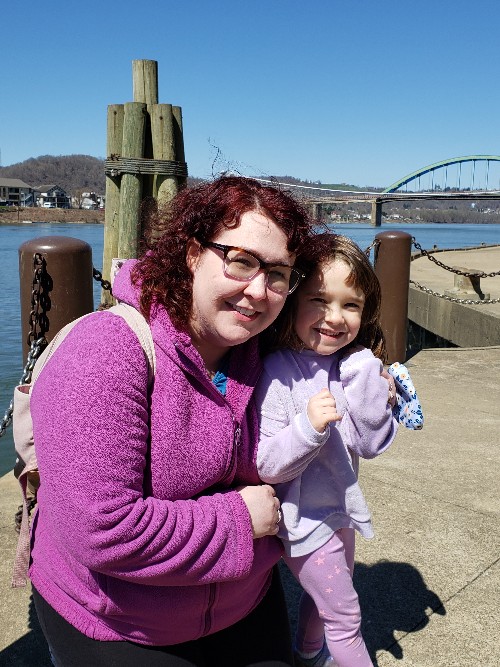 It’s so disorienting to go someplace with hills or mountains. Toledo is an old swamp so it’s perfectly pancake flat. We have North-South roads and we have East-West roads and our neighborhoods are cut into perfect little squares. When you’re in the hills or mountains roads go everywhere and nothing makes sense. It led to some fun little adventures.

Here’s to roads that go everywhere!