Food waste. An enormous problem. Approximately one-third of all the food humans produce gets wasted and remains uneaten.

Food waste is a major part of the impact of agriculture on climate change. In order to grow food, we cut down forests, we use fossil fuel to run farm equipment, produce nitrogen fertilizer, and distribute food to consumers. Moreover, when organic waste is not handled properly (through composting), it produces methane, a greenhouse gas, from anaerobic digestion of organic matter in a landfill. Also, non reclaimed phosphorus in food waste leads to further phosphate mining, which is a finite natural resource.

On one hand, humanity wastes a lot of food that we produce. Meanwhile, millions of impoverished people experience hunger and malnutrition. 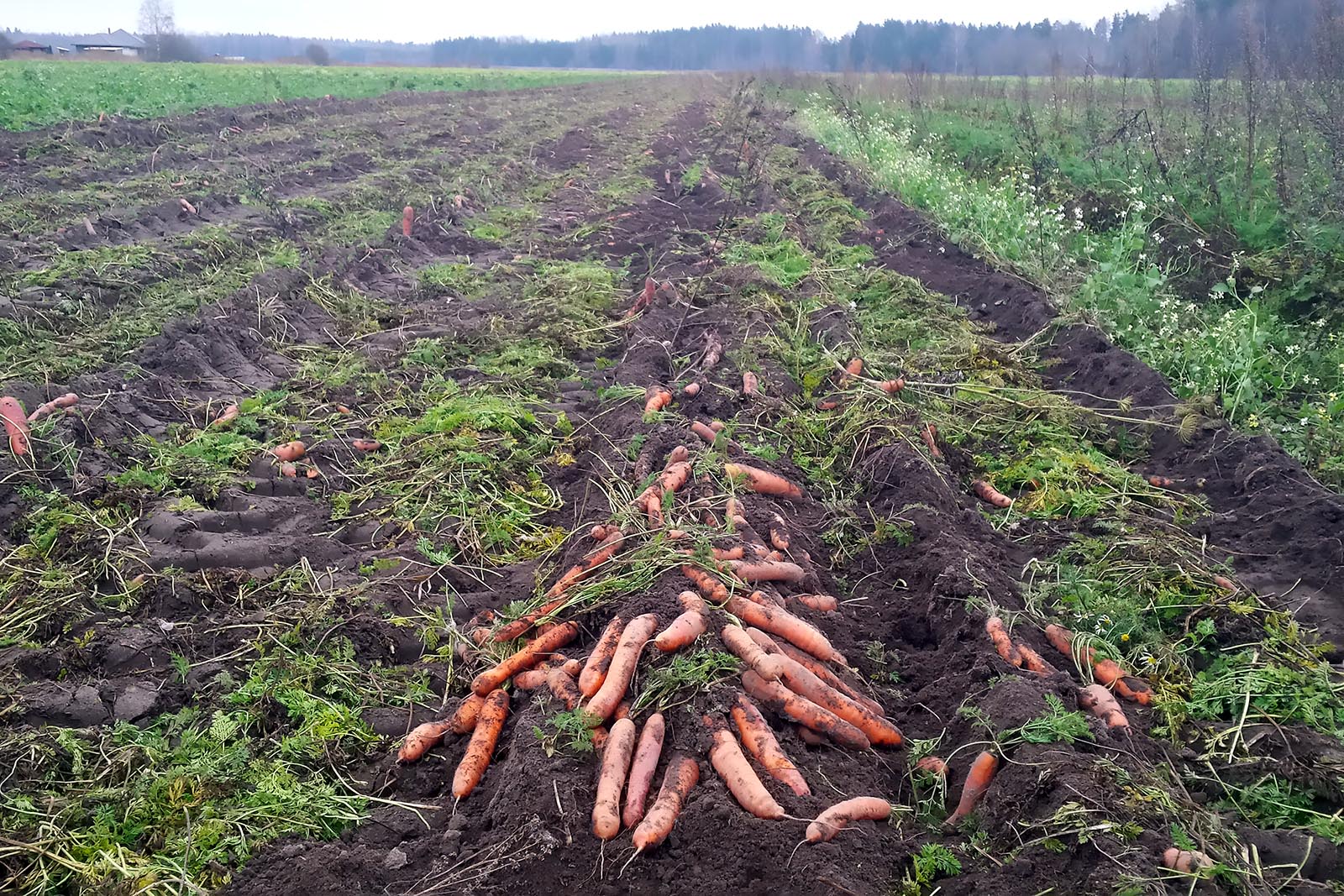 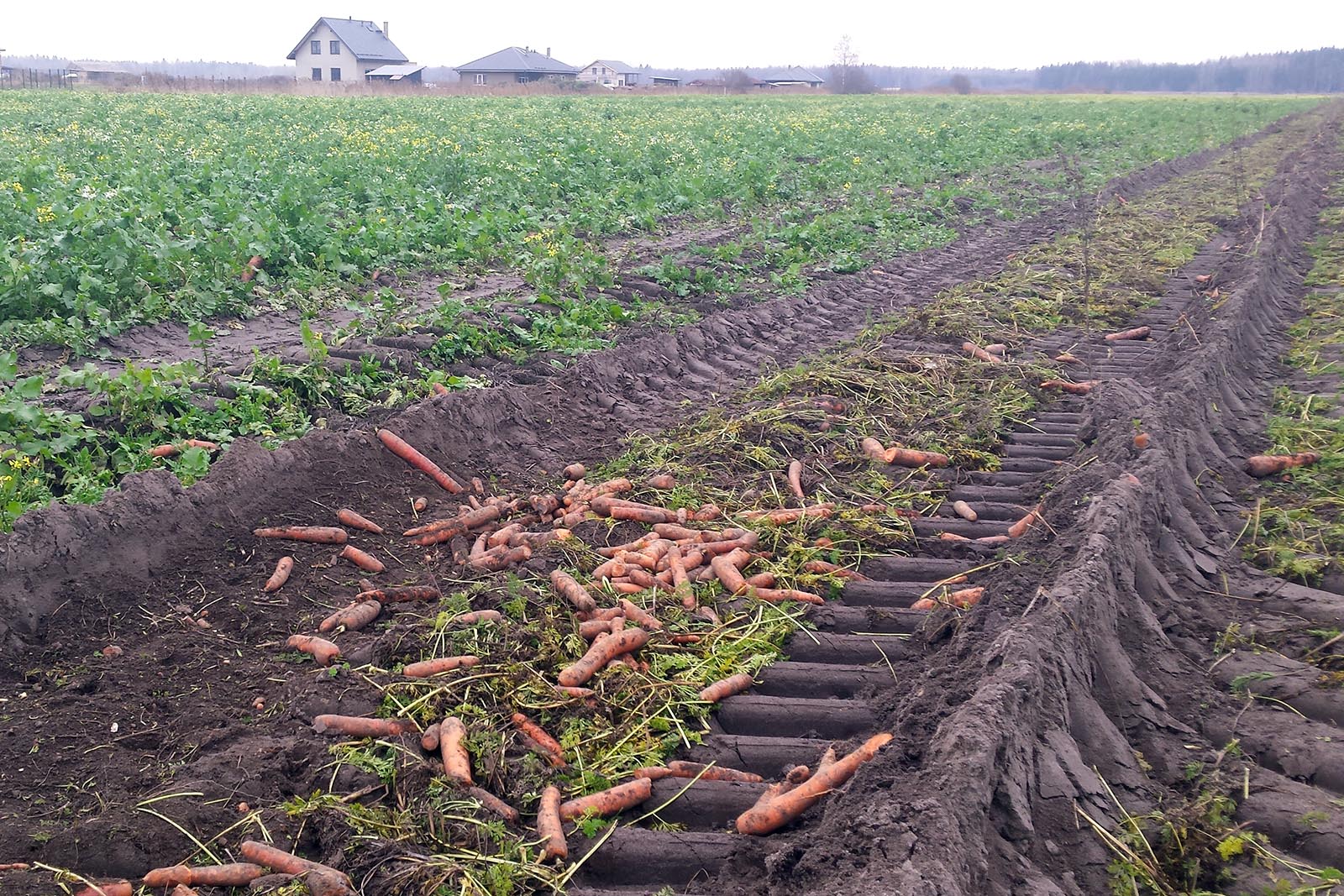 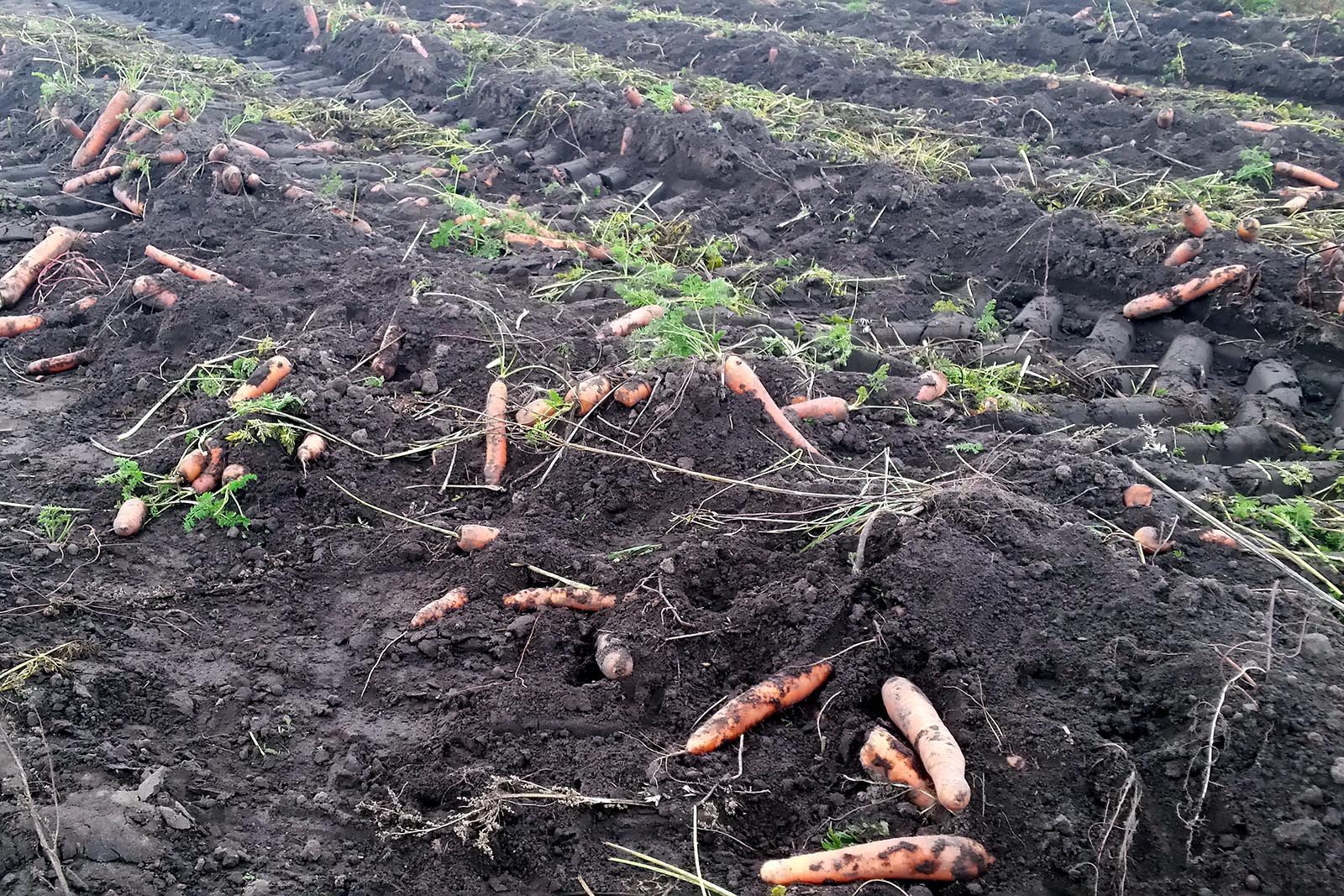 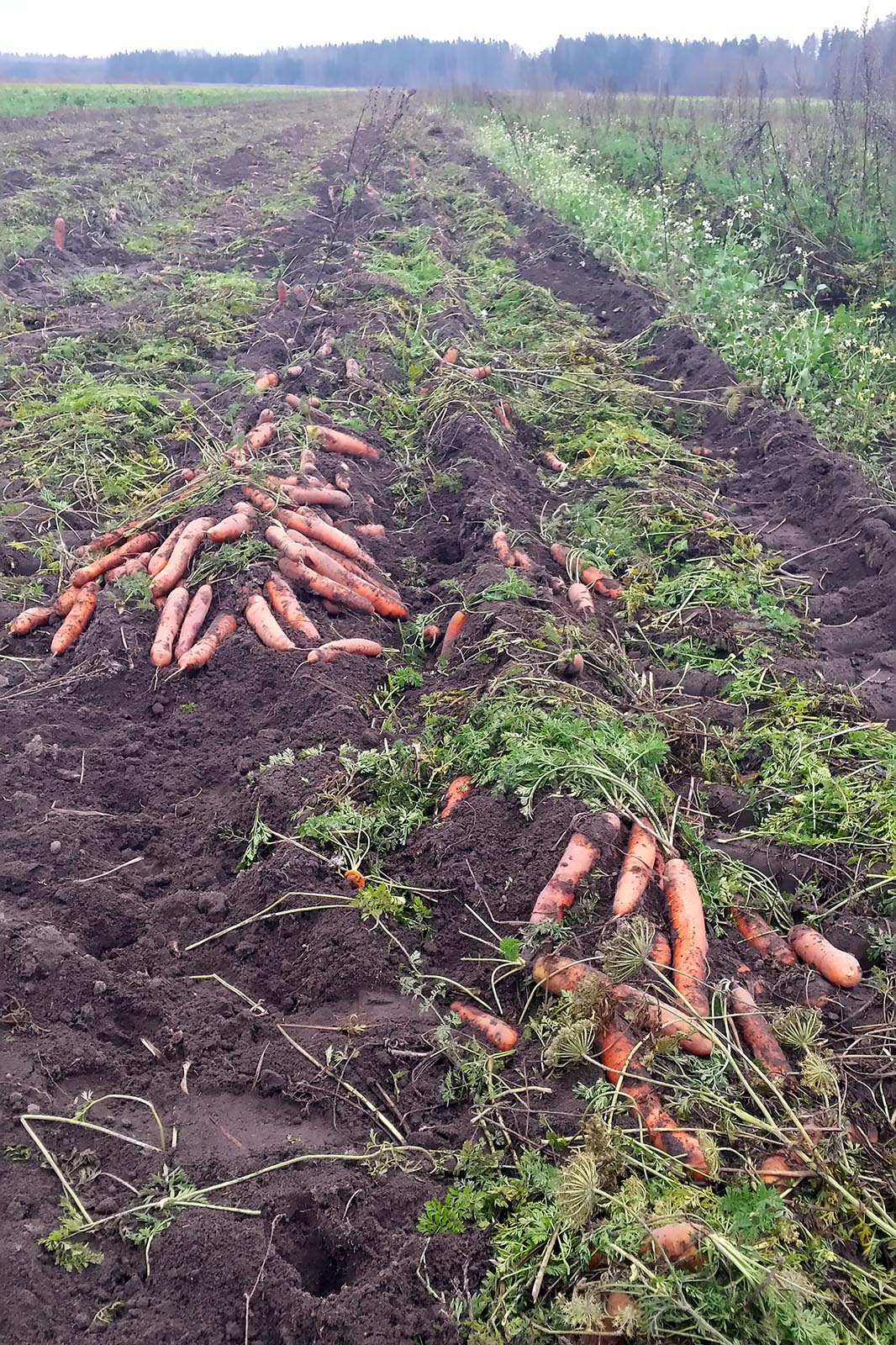 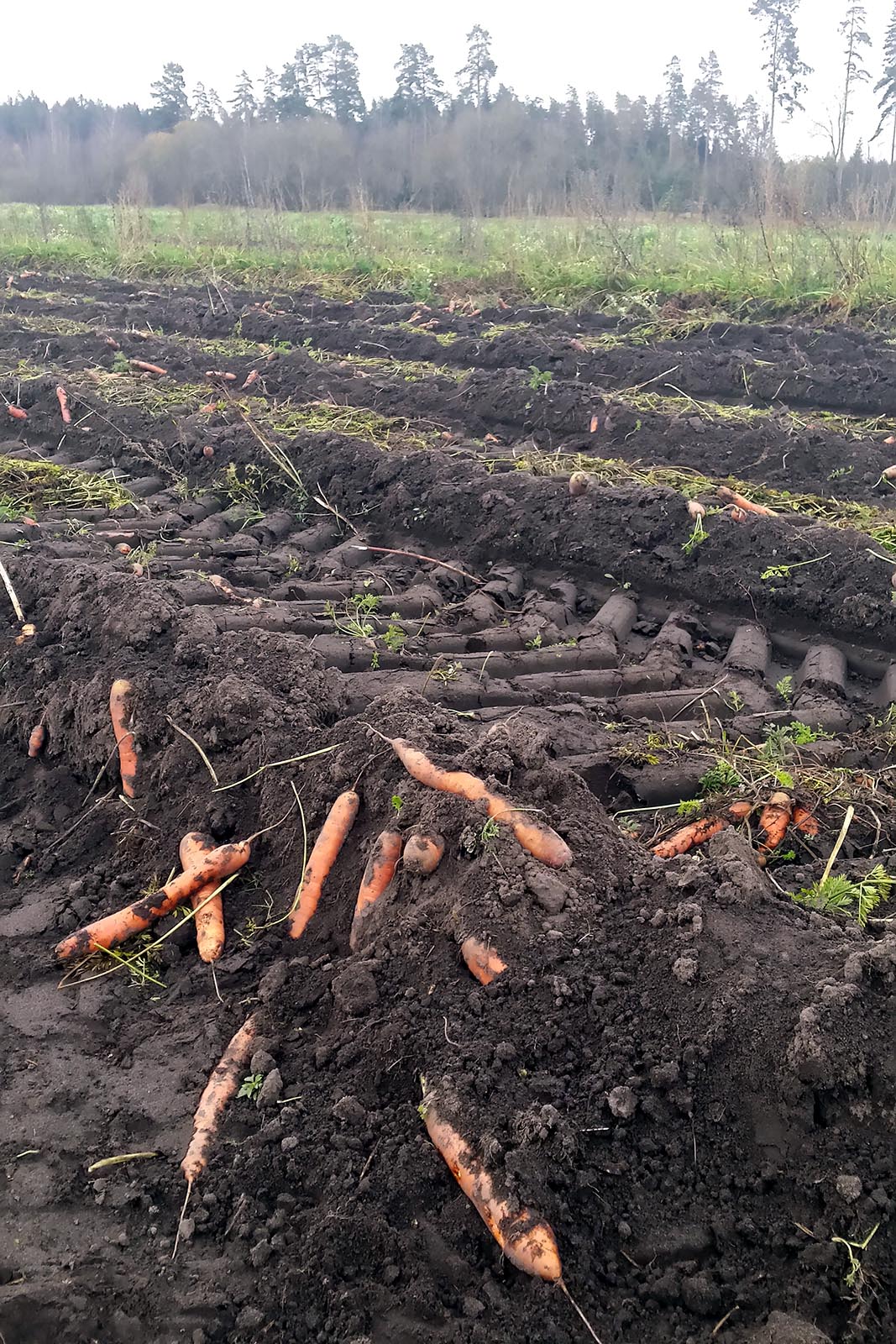 This is a carrot field in a cycling distance from my boyfriend’s home. After mechanical harvest, owners of this carrot field have left a large amount of carrots to just decompose. Apparently, hiring a worker who would manually pick these carrots is not cost effective for the farmer who owns this field. Leaving some carrots to rot is cheaper. 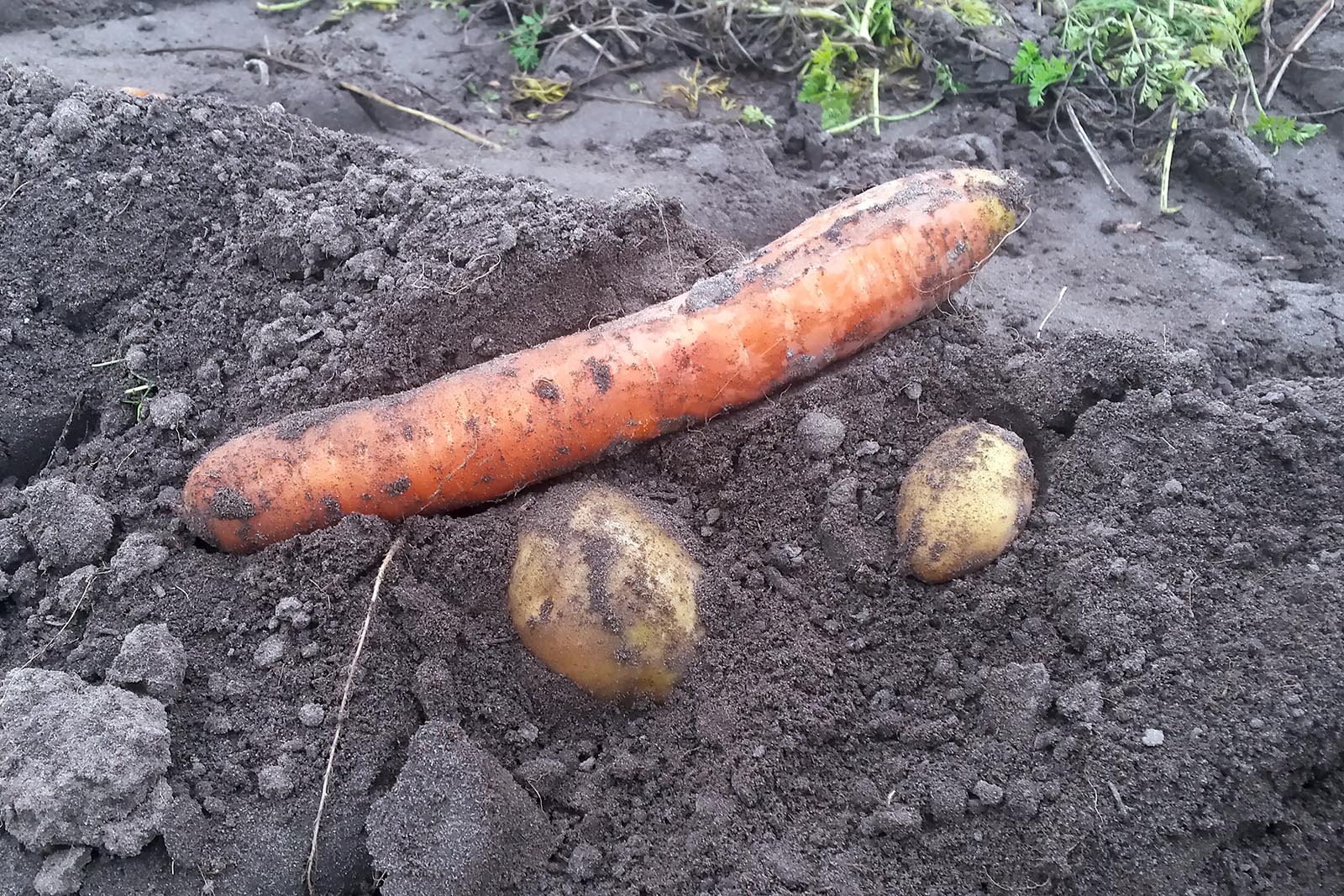 Over the last week, I and my boyfriend stole about 15 kilograms of potatoes and 60 kilograms of carrots from this field. I say “stole,” because technically these carrots and this patch of land do have an owner. Granted, locals have been gathering leftover vegetables in these fields for years, and it appears that the owner doesn’t mind people collecting leftover vegetables after the mechanical harvest is finished.

The owner of this field sells carrots for wholesale prices, and those, just like workers’ salaries, are subject to taxes. Meanwhile, I and my boyfriend think about carrot value in terms of retail prices, and we don’t have to pay taxes on the carrots we collect ourselves, thus gathering these carrots is financially beneficial for us. If a person spends 40 minutes cycling and gathering 15 kilograms of carrots, then their value in retail prices is higher than what the average worker earns in 40 minutes at work after taxes.

Thus, even if a person is poor and has some free time, gathering free food might be not cost-effective for them. If you have to pay for train tickets and can carry no more than 10 kilograms of vegetables in your hands, it’s just not worth it.

Of course, the math changes once you own a car. Then you can gather maybe 200 kilograms of carrots to last the entire family and all your friends and neighbors for a few months. Getting to the field with a car is also much faster than walking or cycling. (I don’t even have a driver’s license, never mind a car. Most of the time I don’t need a car, but occasionally I run into situations where having one would be really convenient.)

So here we have it: a planet on which millions of people experience food insecurity or even outright hunger and food rotting in farm fields. Isn’t capitalism amazing? After all, letting food rot in a field is cheaper than collecting it and distributing it to hungry people for free. Sometimes letting it rot is even cheaper than selling it to somebody who would eat it.

Food gets wasted throughout the entire food system (production, processing, distribution, retail, consumption), and often it happens for financial reasons.

Grocery stores routinely order more food than they can sell, because fully stocked shelves are supposed to look pretty and entice shoppers to buy more.

Grocery stores throw out still edible food that is about to pass its “sell-by” date, because if they gave this food away to people for free/with a significant discount, the same people wouldn’t buy other food items for the full price.

Sellers often refuse to sell “ugly” produce with a discount, because a buyer who already bought a kilogram of “ugly” fruits or vegetables won’t buy another kilogram for the full price.

This reminds me vegan/vegetarian arguments about how farm animals eat the same grains, vegetables, and legumes that humans could eat directly instead. Thus reducing humanity’s overall meat consumption would also reduce hunger. Given how much food waste humans already produce and how it’s not profitable to feed the hungry, I have my doubts about this argument.

But still, the entire humanity’s food supply is indeed interconnected. An increased demand for some food item in one wealthy country means that it will cost more also everywhere else on the planet, which means that poorer people can become unable to afford said food. After all, historically, during most famines food was still exported from that region in which people were literally starving to death.

Food production causes immense greenhouse gas emissions. Thus humanity should stop producing more food than we can eat. Meanwhile, we also should ensure than every person on this planet gets adequate nutrition. Capitalism doesn’t help solving either of these problems.

The Purpose of Morals and Laws » « Creepy Sexual Practices