Scientists routinely identify some lifestyle habit that contributes to global warming and come up with a better alternative that causes less environmental harm. Then people recommend that others should change their lifestyles and do the better alternative whenever possible. So far so good. And then somebody shows up and says, “Let’s all do this one thing and we will save the planet.” Um, no, that’s not how it works.

Thinking about tackling environmental problems is overwhelming. There are so many problems, so many sources of greenhouse gasses, so much pollution and environmental destruction that thinking about all this mess is, well, overwhelming. Thus people who think about environmental problems often focus on a single issue and end up with some pet peeve. In case all my readers haven’t already noticed, my own pet peeve happens to be waste. For me wasting resources just feels so sad, pointless, and avoidable. If a person enjoys their vacation that required a plane flight, they at least get some benefit and lots of joy from doing some action that caused extra greenhouse gas emissions. But when a person wastes resources and sends stuff to a landfill, they get zero benefit from said action, they don’t even enjoy the process. This is why I ended up with waste as my pet peeve.

For example, commonly we are told to eat a plant-based diet in order to reduce our greenhouse gas emissions. Should we? 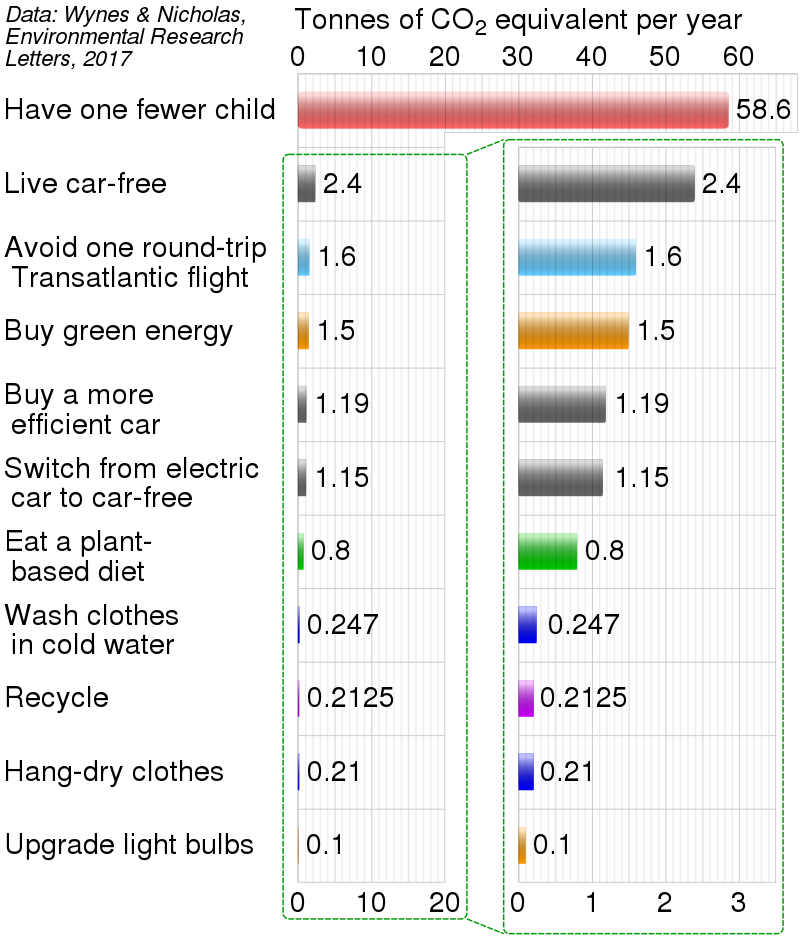 Well, when it comes to reducing one’s carbon footprint, there are other actions that are more effective. But fine, let’s say a person especially cares about greenhouse gas emissions caused by their diet. Or maybe they cannot live without biological kids, a car, and plane flights, so they want to at least do the next best alternative and focus on their diet. Should they adopt a standard vegan diet? 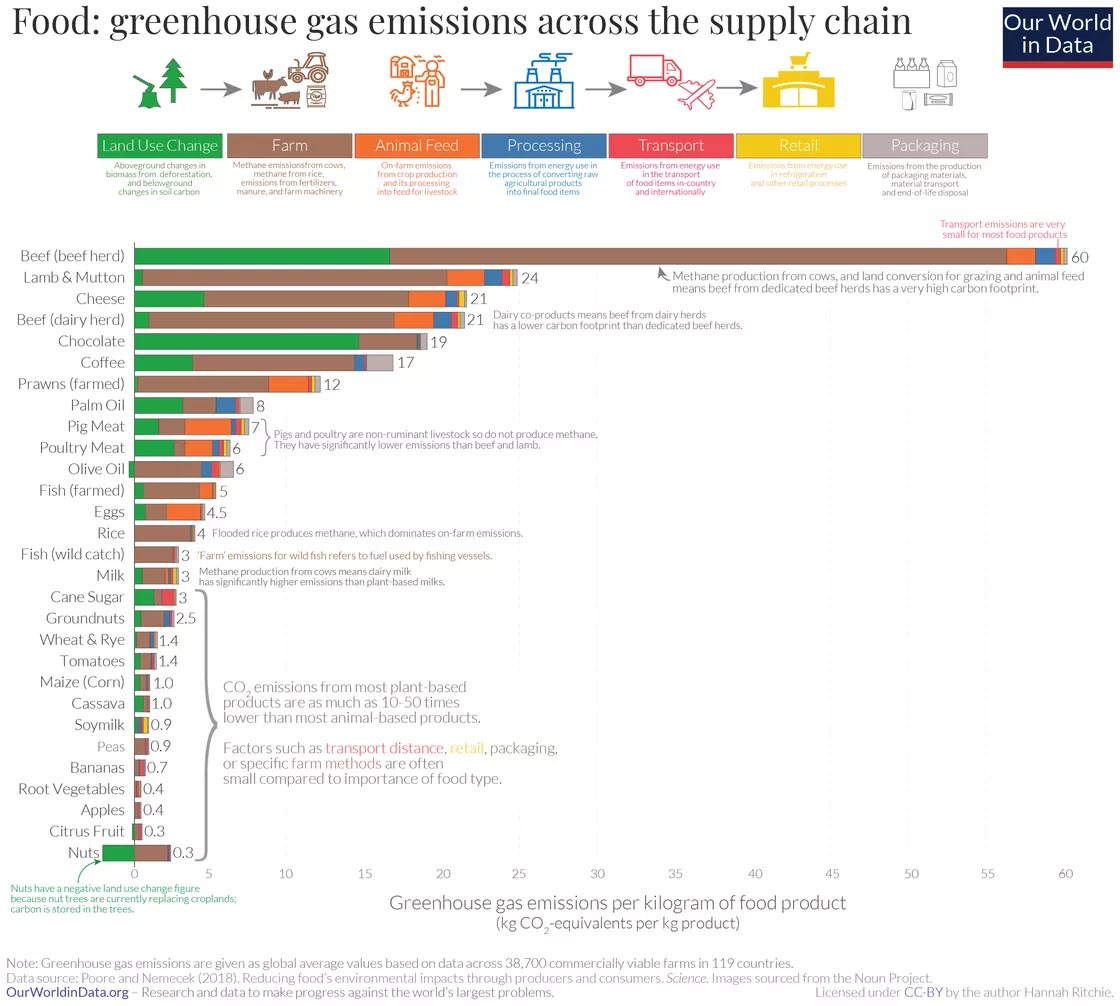 Well, chocolate, coffee, and palm oil are worse than pork and poultry. Olive oil is worse than eggs. Rice is worse than wildly caught fish and milk. If a vegan tries to lecture me about the environmental harm of eggs, fish, and milk while drinking coffee, snacking on vegan chocolate, and sharing on social media their favorite rice recipe, I won’t be impressed. Condemning all animal foods while staying silent about plant foods like chocolate, coffee, palm oil, olive oil, and rice is irrational. If you truly want to reduce greenhouse gas emissions caused by your food choices, following a standard vegan diet is far from optimal. 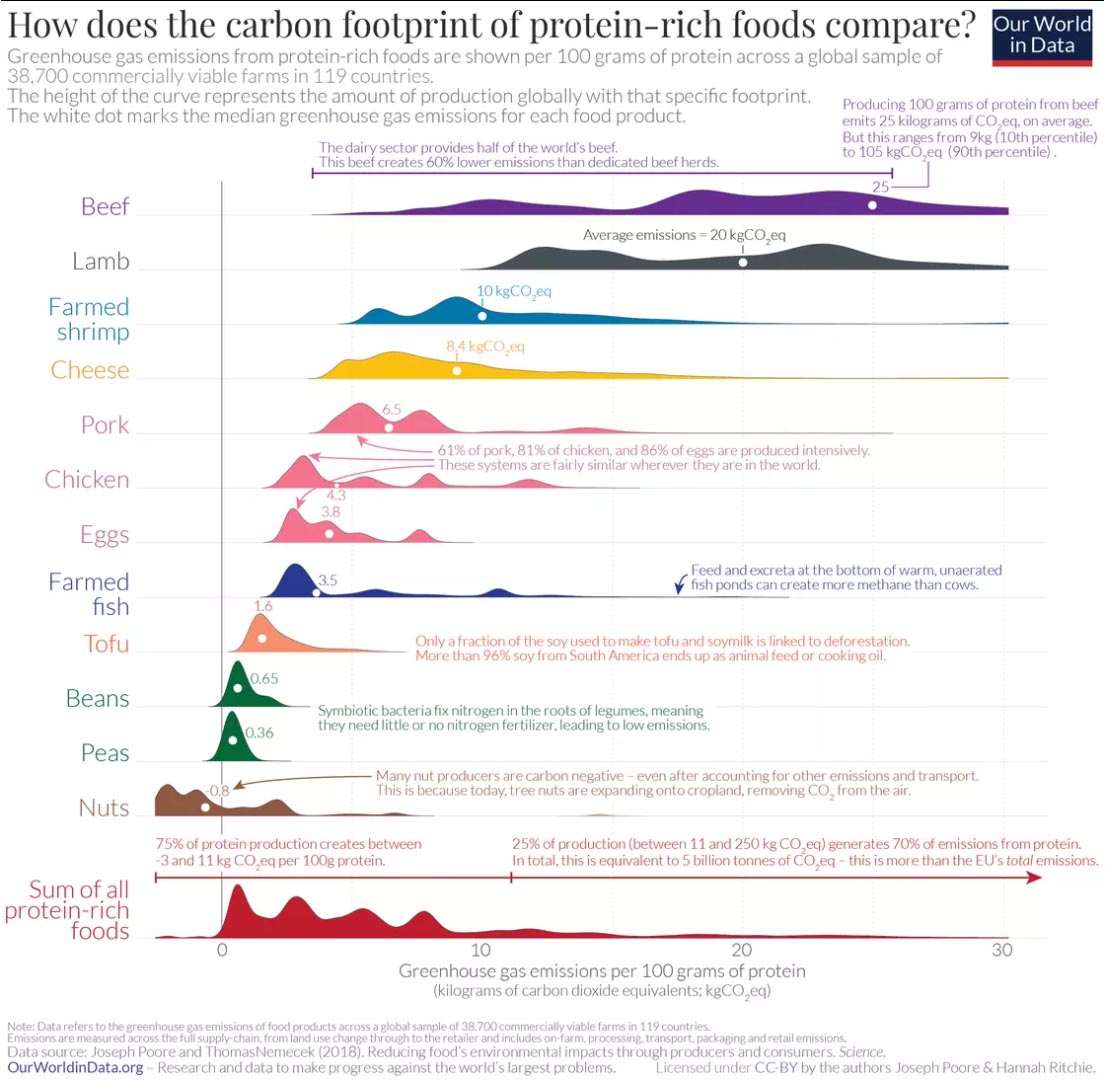 Granted, in defense of vegans, if you only look at protein-rich foods, legumes and nuts do look pretty awesome. They are tasty too. It’s a pity that nuts are very expensive and out of reach for poorer people, but at least legumes are cheap and readily available for most people. And legumes are really tasty too. So yeah, eating more legumes and less beef really is beneficial.

Right now I am picking on vegans just because recently next to my home there appeared a billboard with the words, “Don’t eat the planet. Eat less meat.” But I could have also picked various different examples for this criticism. People who oppose fast fashion will tell us to stop buying and throwing out so many clothes. People from the zero waste movement will tell us to buy our consumable goods without packaging and to buy less stuff in general. People who oppose food waste will lecture us about meal planning and how to cook delicious dishes from various food scraps. And people who are childfree will recommend others to consider having fewer children.

(By the way, I hope that my blog posts about waste don’t come across as an obnoxious and simplistic attempt to say, “Do this one thing: Stop sending stuff to landfills and you will save the planet.” I do understand the concept of nuance even if many of my blog posts focus on just one problem.)

Here’s the problem with recommending simple solutions: people are different and their needs are not always the same.

— Personally, I don’t like interacting with children, so getting myself sterilized was never a sacrifice for me. Many other people do like kids and want to enjoy parenting. Or they never had a choice about the matter, because efficiency of contraceptives and access to abortions is far from perfect.
—I live in a place with good public transport, so I don’t need a car (I don’t even have a driver’s license). Other people live in different places.
—I dislike the smell of coffee and I never got used to drinking it on a regular basis. Many other people are pretty much addicted to coffee and feel bad without their morning cup.
—I don’t like the taste of most soft drinks. Basically, I dislike all beverages that contain dissolved carbon dioxide, which means there are very few drinks that get sold in plastic bottles that I’d be willing to consume. Many other people really like these same drinks.
—I live in a walking distance from a farmers’ market and two zero waste stores. That is a luxury.

If I started telling other people to live the way I do, that would be plain nasty. I have chosen to reduce my greenhouse gas emissions in areas where it requires relatively little or even zero sacrifice from me. For example, for me not buying coffee and drinks in PET bottles requires zero inconvenience or sacrifice, because I don’t even like these drinks. Alternatively, avoiding plastic bags and plastic food packaging is a bit of hassle, because I have to remember to take my own empty containers with me whenever I go grocery shopping, but it doesn’t feel like a huge inconvenience for me; I also have to avoid supermarkets and instead walk a bit longer distance to a store with bulk bins, but it’s not that terrible. The catch is that for a another person with different food preferences who lives somewhere else doing the same actions (avoiding coffee, drinks in PET bottles, and food packaged in plastics) can be much harder than for me.

This is why I cringe whenever I hear somebody say that meat isn’t even tasty and legumes taste much better anyway, thus it ought to be easy for everybody to be vegan, and not eating animal foods doesn’t even require such a huge sacrifice. Indeed, if somebody doesn’t even like the taste of beef then not eating it really is a great idea. But it is wrong to assume that a plant-based diet is just as easy for everybody else. Never mind that some people are allergic to vegan staples or must limit their carbohydrate intake due to diabetes.

Whenever a vegan with a car, two kids, and a coffee drinking habit tries to lecture me about how I am destroying the planet (I do eat animal foods), I perceive that as hypocritical even though I can agree that eating more legumes and less meat is beneficial.

Here’s a better solution: Each person should decide for themselves, which lifestyle changes are the least painful for them personally. Instead of saying “do this one thing to save the planet” about whatever happens to be your pet peeve, it would be better to encourage people to carefully think about their actions and figure out what works for them.

In my case, whenever I publish a blog post about how to live with less waste, I’m not implying that everybody must follow my exact advice. Instead I see it more like, “In case any of my readers are interested in reducing the amount of waste they create, here’s some advice on how they can get started.”