Now that the Christmas is over, some of you might have gifts that you don’t want. If so, you might be thinking about returning an unwanted holiday gift back to the store. Unfortunately, there’s a good chance your holiday returns will end up in a landfill. Each year, consumers return a lot of goods, a significant portion of which are processed during the Christmas season. Unfortunately, only some of returns make it back to shop shelves.

Once a product is returned, the retailer has to deal with the cost of assessing the item and repackaging it. Sadly, especially with low value items, often it is cheaper for the retailer to throw out returned goods rather than trying to resell them. On top of the sorting and repackaging problems, there’s also the time limit to get certain products resold. Returned electronics, for example, can lose much of their value in just a few months. This is why many returns are sold for pennies to liquidators and discounters before ending up at regional wholesalers, who send the goods to pawn shops, dollar stores or out of the country. Retailers have worked out logistics how to get goods from the place of manufacture to the shop shelves. Reverse logistics (getting good from customers back to the shops) are severely lacking.

The overwhelming majority of my clothes are from second hand shops. I try not to buy new goods whenever possible so as to avoid increasing demand for more new stuff. While shopping in second hand clothing stores, I have noticed that pretty much all the clothes there are with no signs of wear at all, they are completely new. Many of these clothes still have all the tags on them.

The environmental impact of such human behavior ought to be obvious. Precious natural resources are consumed; stuff is manufactured and shipped around the entire planet only to end up in a landfill without being used at all. Moreover, not only are these returns environmentally unfriendly, but they are also costing humanity a fortune. Whenever we purchase some goods, the price we pay also needs to cover the expense of producing all those other goods that end up directly in the landfill.

It saddens me to watch the wastefulness of humanity. If trashing the planet at least made us happy, then there would be at least some argument in favor of the modern wasteful lifestyle. But we aren’t even enjoying ourselves while we destroy everything around us.

I grew up in poverty. When I was a child, each time I witnessed rich people wasting resources, it made me immensely envious. Why couldn’t I just take for free all this stuff that the owners weren’t even using? I live in a city where countless poor people lack adequate housing. Yet numerous houses stand empty with nobody living inside. On this planet, millions of people suffer from malnutrition, many of them even starve to death. Yet the humanity throws out a significant portion of all the food we produce. I have never experienced hunger, but I did grow up in the local equivalent of slums (namely, a tiny apartment in a house that needed serious repairs). Whenever I see other people wasting resources, I feel a stab of envy, because I’d love to take for free all this stuff they don’t need.

Nowadays, my financial situation is reasonably good. Overall, I’m happy with my life. But I still need to be careful with my finances, because my income is below-average. That was an intentional choice. Back when I had a real job that required working for 40 hours per week, I had more money, but I felt miserable. I had no free time or energy to actually enjoy my life. Thus I decided to work part time and be self-employed. I value free time more than money, so that’s a trade off I chose to make. Nonetheless, I do have to get by with little income, thus I still feel envious whenever I watch other people wasting resources, because I’d love to take their stuff for free if they don’t need it.

While living in Germany, I tried to do some dumpster diving. The problem was that I wasn’t athletic enough to jump into a dumpster. Sometimes I succeeded in fishing something out of a dumpster. On many other occasions, I saw various things lying there at the bottom of the dumpster; stuff that I would have loved to take for myself, but unfortunately I couldn’t reach this thing. That hurt. 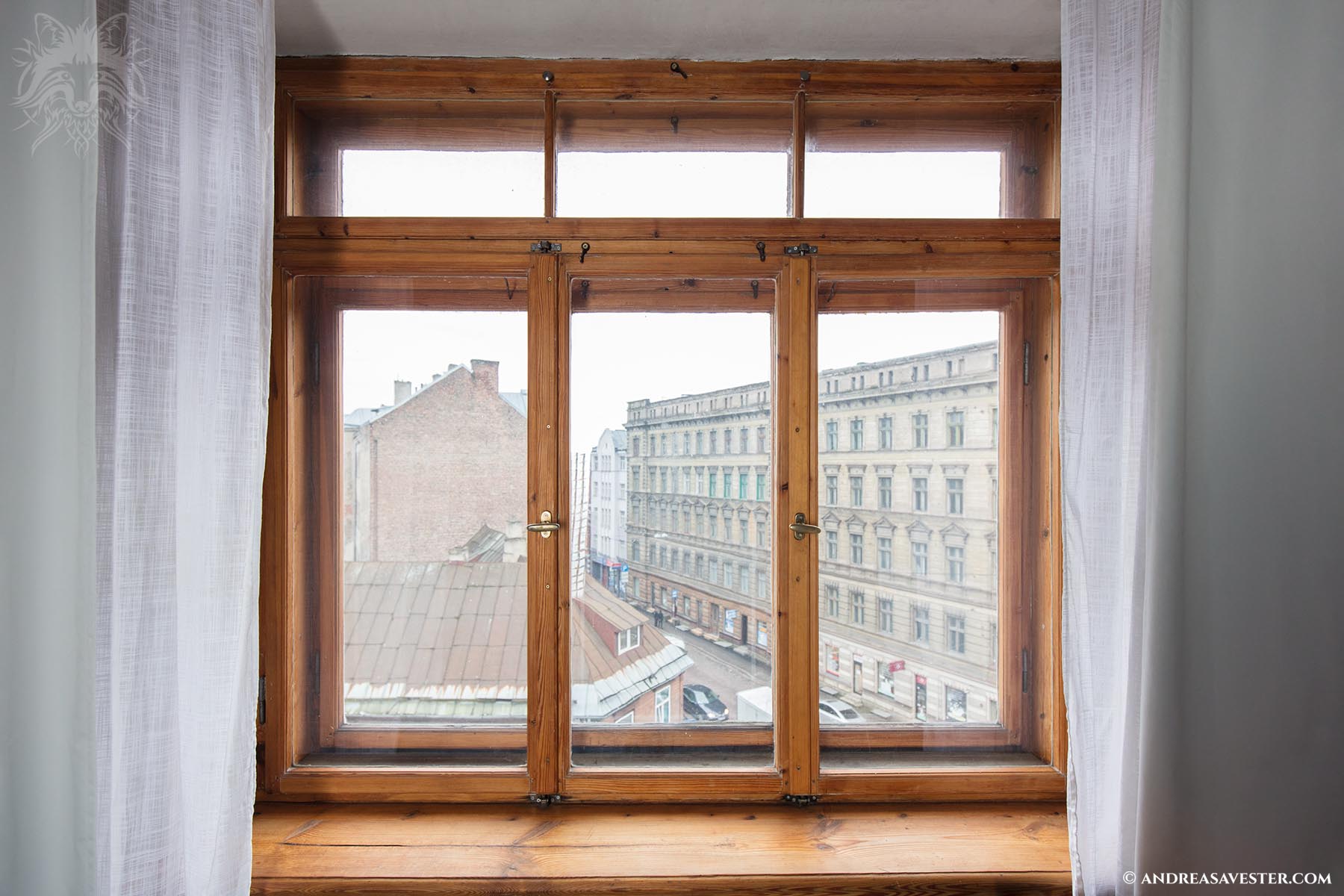 And this is the view from my bedroom window.* Pay attention to the large building on the right side. It is empty. Nobody lives there. On the ground floor, there are some shops, but the above floors are completely empty. This house has been empty for at least seven years (that’s when I moved to my current home).

The other reason why I dislike wasting resources is the environmental harm. Personally, I have little hopes of succeeding to make the world a better place. But at least I don’t want to make things worse. I dislike the idea of leaving a trail of trash behind me. And I definitely don’t want to cause more harm than I have to. Merely by being alive, I am bound to cause some environmental harm. I cannot reduce this harm to zero, and I don’t really want to severely sacrifice personal comfort in my attempts to reduce the harm I cause. But I definitely do not want to cause more harm than necessary. When people are trashing the planet and don’t even enjoy themselves in the process, than that’s not just merely harmful, it is also pointless and absurd.

By the way, this Christmas I was lucky not to get any gifts that would turn into a waste disposal problem. The only unwanted gift was a goose that was meant for both me and my mother. A family member gave us a raw goose with the expectation that my mother will cook it. Unfortunately, there were some problems. Firstly, my mother doesn’t like cooking, she perceives it as a chore; normally she doesn’t prepare any foods that require more than an hour to cook. Secondly, our oven is absolutely unsuited for cooking a goose. The oven is too small for something as large as a goose. On top of that, we have a forty years old oven that burns natural gas, meaning there is an open flame at the bottom and no reliable way how to control the temperature. Thirdly, in order to roast a goose you need a large roasting tin, that’s something my mother didn’t have.

I barely assisted my mother as she tried to cook the bird; instead I got to spend a day watching her misery and feeling sorry for her. The good news is that there was only smoke and no fire. All the goose fat that melted and dripped below to the bottom of the oven didn’t ignite even though it landed next to an open flame. On top of that, the meat actually was edible once we threw out all the burned skin. So I guess it could have been worse. Still, my mother would have been much happier if this chore hadn’t been thrust upon her during Christmas.

———
* I don’t particularly like the view from my window, but I do like the window. It is antique, made from pine wood. Back when I started living in this place, the windows were covered with countless layers of dirty, old, flaky paint. I fixed the windows myself. First, remove all the layers of paint. Next, sand the wood. Afterwards I covered the wood with linseed oil on the inside and some paint made from pine tar and linseed oil on the outside. By the way, I know a lot about antique wooden windows, I even know how to make my own linseed oil putty for glazing windows. In Europe, I have seen countless historical buildings with ugly windows made from PVC plastic. That looks so sad. I understand that antique windows are often hard to fix (especially when damaged). I also know that old windows are pretty bad at heat insulation. But the new windows that are made nowadays are just so damn ugly.