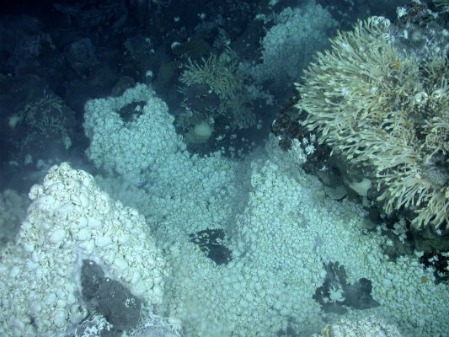 The thing about Antarctica is it’s cold. Really cold. As in an average temperature of about 15 F on the warmer coastline and even more frigid in the interior. So maybe it’s no surprise that warm seeps and hydrothermal vent communities in that neck of the woods would march to their own beat. That’s exactly what a team of researchers has announced:

(Houston Chronicle) — Interestingly the life found at these hydrothermal vents varies significantly that made in the first discovery of hydrothermal vent life, back in the 1970s, on the Galapagos Rift, as well as elsewhere since then. “What we didn’t find is almost as surprising as what we did,” said Oxford University zoologist Alex Rogers, who led the research. “Many animals such as tubeworms, vent mussels, vent crabs, and vent shrimps, found in hydrothermal vents in the Pacific, Atlantic, and Indian Oceans, simply weren’t there.”

One of the things that’s exciting about this isn’t simply the evolutionary divergence, the warm seeps under the frigid Southern Ocean and ice shelves are about as close as anything on earth to what could lay under the thick ice of Jupiter’s second moon Europa. With over 700 exo-solar planets and counting, the infant intersection between astronomy and biology grew a new two-tiered rating system intended to identify worlds of interest. The first tier is obvious: earth-like worlds in mass and temperature, where water is a liquid (And pizza is not a vegetable). But the other set is less familiar: END_OF_DOCUMENT_TOKEN_TO_BE_REPLACED 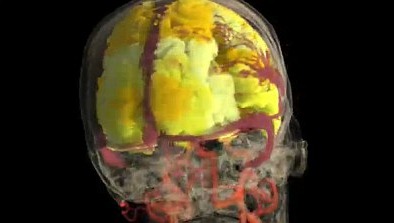 Neuroscience is certainly nearing a climax, as this three-d map built using an active MRI of a female brain during orgasm indicates … it’s science I promise! The culture wars rage around embryonic stem cells vs. adult stem cells, there are pluripotent and totipotent cells, there are even cancer stem cells. But here’s a new stem cell technology we can all agree on: steak and burger stems cells! No, it’s not a joke, it’s real. At least that’s what a Dutch researcher says: END_OF_DOCUMENT_TOKEN_TO_BE_REPLACED

Two important votes in two very different states will test culture warriors and common sense today. Ohio voters go to the polls to vote on a recall of a recent bill pushed through by GOP Governor John Kasich restricting public employee unions — because nothing says constitutional liberty and small government like making it illegal for citizens to assemble and petition the government. Thankfully, polling is trending against this measure, but it’s not over til its over. The other vote in Mississippi will determine if blastocysts are people, polling there shows it coming down to the wire: END_OF_DOCUMENT_TOKEN_TO_BE_REPLACED If you know of uber right-wing warrior Ken Blackwell then you know that headline above reads like dog-bites-man. Blackwell was at it again on MSNBC’s Hardball Thursday evening, shilling for a personhood measure called Initiative 26 in Mississippi, where he tried to talk about the science of human development. Surprise! He mangles it hopelessly. Blackwell stated scientists — and the American people — recognize that, at the moment of fertilization, a human being is created. Some people may be divided on this. Science is not. END_OF_DOCUMENT_TOKEN_TO_BE_REPLACED

It’s strongly suspected that Mars was warmer and wetter in the past. It had to be above the freezing temperature of water at various times for the geological evidence uncovered by a suite of probes to make sense. But now we have the first hard estimate of just how warm ancient Mars may have been: END_OF_DOCUMENT_TOKEN_TO_BE_REPLACED The Black Death, a real life horror show that reverberates into our own era. Think of Halloween, or zombie movies, with the ravenous undead parading around in ghastly make up. Not to mention the suite of autoimmune diseases many descendants of the lucky survivors are, please pardon the term, plagued with. END_OF_DOCUMENT_TOKEN_TO_BE_REPLACED

There are plenty of grisly things in the natural world, and the universe of microbes is no different. But for some reason the life cycle of megaviruses disturbs me as much as any blood-sucking, brain-invading metazoan parasites known to science:

The unusual size and gene content of the virus led one scientist to suggest that viruses could explain the origin of DNA-based life. If viruses carried all these genes, then it’s possible to imagine that one could set up shop in a cell and simply never leave … A paper is being released today, however, that argues that this scenario has things exactly backwards. Giant viruses, its authors argue, have all these genes normally associated with cells because, in their distant evolutionary past, they were once cells.