Please chip in to my Paypal account at Darksydothemoon-at-aol-com if you have some spare scratch. I may may have gotten at a job but it won’t start til mid August. Speaking of work, it’s good work if you can get it. Before taking off for a month and half long summer break, the US House of Representatives voted moments ago to sue the President:

END_OF_DOCUMENT_TOKEN_TO_BE_REPLACED

If you can, please chip in to my Paypal account at Darksydothemoon-at-aol-com. So that I can continue to bring you the greatest fundie funnies. Up on deck, coal PR crews — including one named Twinkle — in and around Alabama have challenged residents to see that God’s will be done. And God’s will, surprise surprise, is for big coal to maximize profit by avoiding pesky regulations and throwing the climate off kilter for a millennia or two: END_OF_DOCUMENT_TOKEN_TO_BE_REPLACED

Thanks to those who have generously chipped in to my Paypal account at Darksydothemoon-at-aol-com. If you can, please join in. It turns out protecting narrowly held religious beliefs can have a downside (Derp!?). Purported followers of the other primary Christian deity are among those hoping to benefit: END_OF_DOCUMENT_TOKEN_TO_BE_REPLACED

If rejecting the federal Medicaid expansion for people living in poverty was ‘awesome in evilness,’ this new scheme by Florida Republicans to deprive middle-class and poor voters their constitutionally mandated rights in the state’s largest population center is social sociopathy:

Think Progress — During the 2012 presidential election, voters reportedly waited on line for upwards of six hours. That wait alone is enough to deter would-be voters from going to the polls. But now residents in Florida’s most populous county will have another disincentive: they won’t be able to go to the bathroom.Earlier this year, the Miami-Dade County Elections Department quietly implemented a policy to close the bathrooms at all polling facilities, according to disability rights lawyer Marc Dubin. Dubin said the policy change was in “direct response” to an inquiry to the Elections Department about whether they had assessed accessibility of polling place bathrooms to those with disabilities.

These same polling places had six-hour lines in the last election, so you get the picture. A interesting evil feature here: there are laws, some part of the voting rights act, that require public polling places be accessible for the disabled. That applies to buildings and bathrooms, too. What these evil bastards have done is hijacked that reg to screw over everyone, justified on the paper-thin premise that it is fair: it’s fair because it makes bathrooms inaccessible for everyone, thus creating a level non-peeing field for handicapped and non-handicapped voters alike. Yeah. Stone cold evil clowns trying to rig elections in the favor of the super wealthy conservative rich.

When I first saw this, I tought for sure it had to be Onion-esque satire. I’m still not entirely sure. But it appears to be real. We have a petition that’s burning up the intertoobz on this sick scam here at Daily Kos.com.

“No one can serve two masters, for either he will hate the one and love the other, or he will be devoted to the one and despise the other. You cannot serve God and money.

I posted Friday that I’m fighting CIGNA for two and a half months of Short Term Disability pay they owe me. That pay is only 60% of hourly base, minus a week here and there they call an initiation period of or some shit, so it works out to about $6.05 an hour even if I win. Sometime in the next few days or weeks I’ll be fired if they continue to blow me off. Here’s the real kicker though: In Texas you don’t get to file for unemployment if you’re deemed too unhealthy to work full time.

Under this system it is entirely possible for CIGNA to decide having a serious problem that initially caused a heart attack followed by an array of complications, some of which could have killed me or rendered me a vegetable, aren’t serious enough to qualify for the pay. They would decree I’m too healthy. And that would be enough to get me finally fired. But at the same time, when filing for unemployment and having to list the reason for being separated from service, Texas could legally decide I’m too unhealthy to work, deny people like me unemployment on those grounds, and basically tell us tough luck pal, you should have applied for short term disability! END_OF_DOCUMENT_TOKEN_TO_BE_REPLACED

You’ve probably read by now the US Supreme Court will hear a case with far reaching consequences for the power of a religious few over the diverse many. The case that will be soon be before the nation’s highest court pits a narrow sect of fundamentalist beliefs about birth control against the health and well being of millions. But it doesn’t stop at birth control. At issue is if a for-profit corporation can violate laws at will and inflict their views on employees and their families merely by claiming the law violates the religious beliefs of a single large shareholder or owner. If that doesn’t scare you enough, take a look at the healthcare … theology, of one of the clowns behind the scenes in this trainwreck: END_OF_DOCUMENT_TOKEN_TO_BE_REPLACED 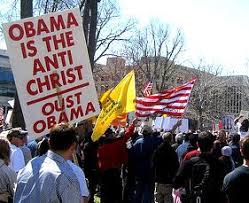 Below is the obligatory, paranoid chain letter I got from a buddy, painting a dark picture of Thanksgiving a few years from now. It’s dripping with the kind of Big Brother sentiment that we all know scatters like dry leaves in the wind as soon as a conservative gets in the wheelhouse. Here’s a clip — as I would never want to inflict the full weight of this maniacal masterpiece in willful ignorance on any normal person:

No Link Available — His 16-year-old son, Jason, was another matter altogether. Perhaps it was the constant bombarding he got in public school that global warming, the bird flu, terrorism, or any of a number of other calamities were “just around the corner”, but Jason had developed a kind of nihilistic attitude that ranged between simmering surliness and outright hostility. It didn’t help that Jason had reported his father to the police for smoking a cigarette in the house, an act made criminal by the Smoking Control Statute of 2018, which outlawed smoking anywhere within 500 feet of another human being. Winston paid the $5,000 fine, which might have been considered excessive before the American dollar became virtually worthless as a result of QE13.

The latest round of quantitative easing the federal government initiated was, once again, to “spur economic growth.” This time, they promised to push unemployment below its years-long rate of 18%, but Winston was not particularly hopeful.

Yet the family had a lot for which to be thankful, Winston thought, before remembering it was a Day of Atonement.

At least, he had his memories. He felt a twinge of sadness when he realized his children would never know what life was like in the Good Old Days, long before government promises to make life “fair for everyone” realized their full potential. Winston, like so many of his fellow Americans, never realized how much things could change when they didn’t happen all at once, but little by little, so people could get used to them. He wondered what might have happened if the public had stood up while there was still time, maybe back around 2012, when all the real nonsense began.

In reality of course, the current administration has overseen recovery from the Great Recession, closed down one ill-conceived trillion-dollar war and is working on ending another. Put together a coalition that ended Qadaffi’s reign in Libya, gave the order to whack bin Laden, and is well on the way to removing Syria’s chemical weapons stocks under international observation. All without a single US casualty.

Just in the last few weeks under this same “tyrannical bumbling yet-somehow-still-an evil-genius,” the Dow has hit 16000 for the first time in history having doubled in the last few years, the NASDAQ is at levels not seen since I was a well to do investment manager almost 15 years ago, and we are on the precipice of a deal with Iran to halt uranium enrichment that may bring that isolated land and people back into the community of nations, with fringe benefits that could spill over into everything from regional security to global energy prices. Beginning in 35 days millions of Americans like me will have access to affordable healthcare despite income, newtworth, and preexisting conditions.

Last day to beg until after the Big Feast, pleeeease chip in a few bucks so a certain hellbound atheist activist can get by. My PayPal email is DarkSydOtheMoon-at/aol.com. I wouldn’t ask if the situation wasn’t grim. Thanks for listening!

The Teaparty playbook is simple: it’s the same ugly bullshit that has sustained authoritarian creeps and their well paid henchmen since the dawn of civilization. It worked for post Civil War racists for more than a century, it worked for European fascists in the 1930s, and it works for the conservative wing of the Republican Party today. An important part of the playbook is to call your opponents the worst names you can think of, say for example, baby killer, pervert, wimp, traitor, or rapist, over and over and over. On the latter, take it away RushBo: END_OF_DOCUMENT_TOKEN_TO_BE_REPLACED

Please keep me in mind this holiday weekend if you have some spare cash in your paypal account, and thanks! Without you this blog and my health would both suffer. Below is a timely post Ed Brayton just put on Facebook. It looks awfully familiar … END_OF_DOCUMENT_TOKEN_TO_BE_REPLACED

Guys, gals, I’m closing in on the halfway mark of what is needed on this year’s holiday bleg, many thanks tor those who already. pitched in I’d say I’ll say a prayer for you, but … you know. My Paypal email address is DarkSydOtheMoon-at-aol-dot/com. I’ll have a snail mail address in a few days too for those who don’t like or don’t use paypal. Thanks!

Update: Why the fuck did I think this guy was Catholic?

John Hagee, a man who is inexplicably in a position of respect and authority in the eyes of millions of Catholics, may be feeling the heat of the new Pope’s focus on the Gospels and the Pontiff’s lesser concern for Hagee’s revolting brand of wingnut politics disguised as religion. So it’s time to stir the hornet’s nest, do a little scapegoating, and who better to give the Holy finger to than Jews? END_OF_DOCUMENT_TOKEN_TO_BE_REPLACED