Prayer does not work any more than any other magic incantation works. Most people know this, including the religious, which is why prayer is only seriously relied upon exclusively when there is no practical solution available. But some fundamentalists have been so thoroughly taken in by the anti-science faction that they opt for prayer alone and refuse medical treatment even when circumstances become dire. If they do that for themselves, well, they’re just fatally ignorant. When that willful ignorance causes the needless suffering and death of someone under their care, it’s homicide. At least that’s how the Wisconsin Supreme Court decided in one tragic case: END_OF_DOCUMENT_TOKEN_TO_BE_REPLACED

Zombie candidate and eternal right-wing pundit Mike Huckabee knows a thing or two about Jesus. The former Arkansas governor doesn’t think his Lord and Savoir is perturbed by tax cuts for zillionaires, sweetheart contracts for war profiteers, or budget cuts for those struggling with the real world consequences of Huckabee’s fave policies. But when it comes to marriage equality, Huckabee knows Jesus is so emotionally invested in denying same sex couples equal rights he cannot divinely compose himself today. END_OF_DOCUMENT_TOKEN_TO_BE_REPLACED

A prominent conservative Christian group that touted faith-based therapy to convert gay and lesbian believers into straight counterparts has thrown in the towel. It even sounds like some in the organization had a come to Jesus moment of the reality kind: END_OF_DOCUMENT_TOKEN_TO_BE_REPLACED

The candidate for Lt Governor in Virginia, pastor E. W. Jackson, knows how to to tell the white wingnut base what they love to hear. Birth control is the same as the Klan, yoga is a vector for Satan, etc. This week he thoughtfully tailored his message to Junteenth: END_OF_DOCUMENT_TOKEN_TO_BE_REPLACED
I’m watching Maddow and literally laughing out loud at the opener: Obama is bringing plagues of locust down on Israel, and the evidence is there’s been flies seen buzzing around his head! I’m not sure that flies and locusts are related in any scientific way mind you, nor is it clear how Obama would control swarms of invertebrates beyond demon powers, but that’s hardly the point. The point is that black man is the antichrist! Turns out this stuff has been around for at least a few months: END_OF_DOCUMENT_TOKEN_TO_BE_REPLACED
Preach to the kids, the younger the better, a time proven method of indoctrination used by the Good News Club for children. The only good news is there are some people on both the skeptical and faithful side who understand the danger inherent in a state religion. They’re scattered like diamonds in the rough throughout this video clip. H/T VegasJessie.
I don’t know if my colleague at Daily Kos, Denise Velez, is a wiccan. She only describes herself as a pagan. But if she is a witch, I expect she is a good one. The same cannot be said of the self-anointed Christian warlock she writes about today. David Lane is a powerful and growing force on the politico-religious right. Here’s some of his screed: END_OF_DOCUMENT_TOKEN_TO_BE_REPLACED 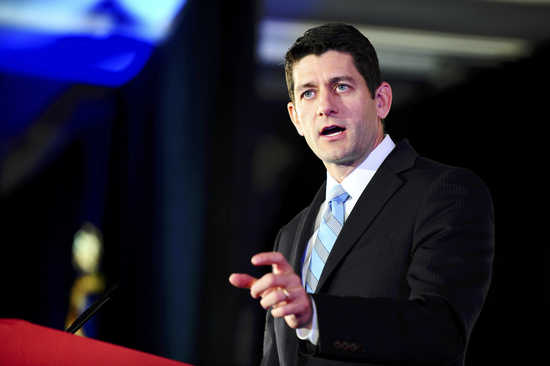 Rep. Paul Ryan, seen here telling the crowd why good Jesus-based values demand we cut Food Stamps and meal assistance for seniors yet again because those kids and old people will probably just trade that food for abortions or something. Probably.

Via my colleague Hunter at Daily Kos — The most interesting thing about Ralph Reed’s Faith & Freedom Forum being held this week is that it exists at all. Ralph Reed, for those precious few of you who do not remember recent political history, is a crook. He is a political scammer who worked with Jack Abramoff in a swindle of Native American tribes and conservative Christians alike, a scam that went to the heart of the conservative movement but in which every last person save Abramoff himself has undergone a magical conversion back into respectability based essentially on the same scam as they started out with, which is duping Good Christian People out of their money.

So to have Paul Ryan, Marco Rubio, Allen West, Ron Johnson, Rick Santorum, Gohmert-Perry-Bachman-Palin-Cain-and-everyone-else-who-is-anyone in far-right conservatism eagerly climb aboard the good ship Ralph Reed for his latest little shindig should tell you all you need to know about the sincerity of the whole movement. He’s a lobbyist who got caught in a money laundering scandal, and he was back lobbying and collecting checks in no time flat because, bluntly, all the conservatives currently surrounding him were just fine with that. Just don’t get caught again, Ralph, and everyone will go along with the political scammer running a supposed morality-based movement. Everyone involved is exactly that shallow. … Read the whole list of religious scam bullet points here.

Pat Robertson got slammed on Free Republic when he blamed Haiti’s earthquakes on evil  voodoo. Turns out though, he’s not the only one who thinks that! So does this clown: END_OF_DOCUMENT_TOKEN_TO_BE_REPLACED