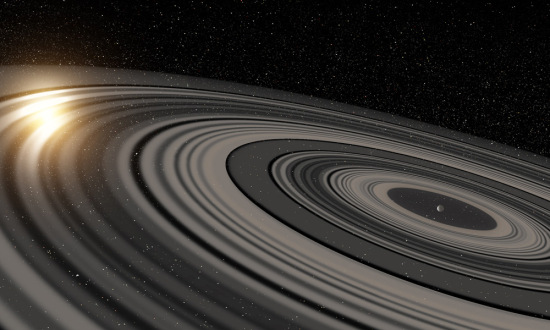 There are many beautiful sights to be seen in our solar system and more coming into view everyday. But when it comes to superstars, every child knows the answer: Saturn! It is hands down our most famous planetary celebrity and for good reason. Easily seen in a small telescope, the disk hangs in space like a gilded jewel cradled by spectacular rings of gold. With greater resolution the rings only improve, taking on features of a finely machined phonograph, first hundreds and then thousands of individual strands appear, each carefully etched into space over eons by Newton’s best legal work, some twisted by tiny, growing shepard moons into intricate braids of yellow and orange. You could spend a lifetime exploring the intricacies of those rings, and some scientists do!

Whereas Jupiter turned into a mini-solar system, well ordered with four large moons standing in for diminutive planets, Saturn seems to have taken the demolition derby approach, full of wreckage left by colliding moonlets. The rings are thought to be one result of those ancient catastrophes large and small, perhaps maintained by periodic cryo-volcanoes emitted by nearby icy moons flexing in Saturn’s relentless tidal grip. Other astronomers believe they may be, in their current incarnation, a relatively temporary structure. If so we’re lucky their cosmic life overlapped our own.

The other gas giants have rings of a sort, mostly dim and hard to see, some merely dusty arcs that don’t even make a full circle, nothing to compare with Saturn. But some astronmers have found another ringed gem hidden in exo-planetary data. Careful analysis of eclipsing starlight shows it also has rings, and they are huge:

From Quarks to Quasars — Astronomers at the Leiden Observatory, The Netherlands, and the University of Rochester, USA, have discovered that the ring system that they see eclipse the very young Sun-like star J1407 is of enormous proportions, much larger and heavier than the ring system of Saturn. The ring system — the first of its kind to be found outside our solar system — was discovered in 2012 by a team led by Rochester’s Eric Mamajek.

A new analysis of the data, led by Leiden’s Matthew Kenworthy, shows that the ring system consists of over 30 rings, each of them tens of millions of kilometers in diameter. Furthermore, they found gaps in the rings, which indicate that satellites (“exomoons”) may have formed. The result has been accepted for publication in the Astrophysical Journal.

“The details that we see in the light curve are incredible. The eclipse lasted for several weeks, but you see rapid changes on time scales of tens of minutes as a result of fine structures in the rings,” says Kenworthy. “The star is much too far away to observe the rings directly, but we could make a detailed model based on the rapid brightness variations in the starlight passing through the ring system. If we could replace Saturn’s rings with the rings around J1407b, they would be easily visible at night and be many times larger than the full Moon.”

One of the reasons Saturn’s rings are so gorgeous is because they dwell in a region well past the frost line, where substances like water form shiny grains of ice, and they hug a planet with a bottomless atmosphere that strongly favors yellow wavelengths, lending the rings an exquisite golden hue so bright they almost appear lit up from the inside out. In the case of the proposed new exo-planet, astronomers can’t really say much about color or reflectivity. But the system is young, it’s probably still violent, lots of collision and mergers going on, at least one big gap is suspected where a large moon may be sweeping up material. This young planet is many times the mass of Jupiter, it’s probably still growing and glowing, maybe its a a sullen red spark of an eye glaring out of the ring system at the lower edge of our visual acuity in visible light, maybe more rose-colored, or it could still be hot enough with the heat of formation to shine a golden yellow brighter than Saturn.

These rings are so big they would stretch from the Earth to the sun, the star J1407 is similar to our own, and the planet is far enough away that it may take about ten years to make a single orbit. So, much like Saturn, they could well be spectacular if seen in visible light. Maybe they would look something like this if the new planet was in the same place in our solar system that Saturn currently occupies. 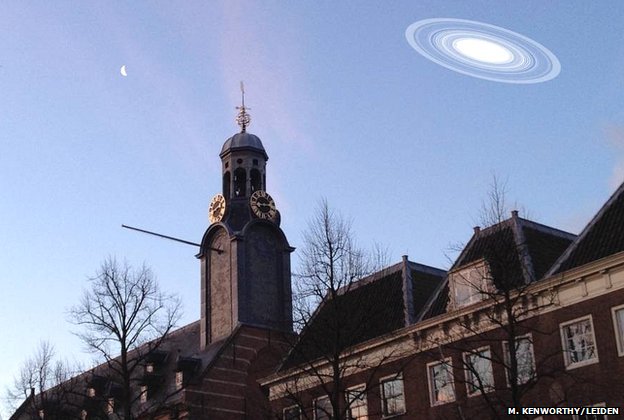 Which one of these drugs should we go after? » « 2014: still the warmest year despite winter snowstorm in Northeast