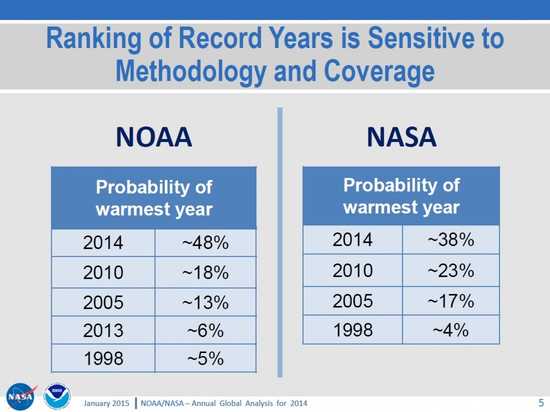 Don’t be fooled by a winter blizzard this week! The National Oceanic and Atmospheric Administration (NOAA) rated 2014 as the hottest year in the global temperature record and NASA’s Goddard Institute for Space Studies (GISS) promptly chimed in with the same finding. But there’s wiggle room for the dedicated energy shill to wiggle around in, because both organizations also give an error margin when they rate a year. Chris Mooney walks us through it:

A figure of 38 percent may sound modest, as if there’s a worse than 50/50 chance the result is correct, but this is not a local rain forecast. There are a lot of data sets that go into the annual global temperature calculation, representing daily readings and shorter term trends recorded all over the Earth throughout an entire year. Each of those measurements has tiny error bars that affect the final tally. Expert sources explained to me via email that this is especially true of largish regions around Antarctic, and when dealing with measurements recorded some time ago in the official NASA GISS temperature record, which extends all the way back to the 1880s.

That’s how real science works. NASA and NOAA, being public agencies and both staffed by some of the best scientific minds available, lean toward greater transparency and scientific rigor, the tender denials of newly declared overseers Senators Cruz and Rubio notwithstanding. And in this case, it’s not just US climate scientists; Japan’s Meteorological Agency announced the same result last week and others may follow suit shortly.

Denier “science” on the other hand works a little bit differently and in all probability you’ll get to see a prime example of it this week. Snow sticking on the ground only gives an upper bound for cold. It only means the temperature is at or below the freezing point of water. Snow and ice doesn’t say if it’s any colder than that. A blizzard in the Hudson Valley during the month of January only confirms what we expect winter to be like there. Not exactly big news.

Here’s where the the climate change denial swindle comes in: record snowfall and record cold are two distinctly separate things. In fact, warmer air can hold more moisture than cooler air which means, when all other factors are equal, record cold and record snowfall tend to be more mutually exclusive rather than going together hand in hand. The coldest place on Earth is central Antarctica, it’s also one of the driest. It never really snows at the South Pole, all they get are occasional flurries of tiny snow grains. But this week you’ll no doubt see those two distinct phenomenon, record cold and record snow, blurred together seamlessly by the usual suspects to imply a snowstorm in the middle of winter signals the death of the international global warming conspiracy. Probably with an Al Gore snowman or two along the way.

Meanwhile, unseasonably warm climes have persisted from eastern Siberia to Alaska all the way into the Pacific Northwest for the last several years. Greenland is melting, alpine glaciers are receding, and we really don’t have to argue about this anyway because we’ve had these instruments called thermometers all over the world and orbiting above for decades now and proxies like ice cores, tree rings, and coral assemblies going back for millennia. That data is unequivocal, the Earth is in the middle of a warming trend that continues to this day. Once the sun and other factors are eliminated, the best remaining explanation by far is an accumulation of greenhouse gasses and extensive analysis of those gasses tells us where they come from: mostly from burning fossil fuels and a little bit from other, related industries.

It’s disturbing that thousands of scientists and activists working around the clock for years have barely dented the energy lobby’s effort to downplay climate change, but one big drop in oil prices slowed production from the dirtiest oil more than all their efforts combined. Which is all well and good for the environment and the economy, but stop and consider the flip side of what we’re seeing: a big spike in oil prices would fuel a public outcry for cheaper gas anyway we can get it. If oil prices simply readjust back to where they were a few months ago and rise a little more, or goddess forbid there’s a real 1970s oil shock because of war or instability in a big producer nation, we’ll be putting up in rigs in Yosemite if there’s a barrel of oil to be had there, and any progressive politician or scientist who tries to slow it down would risk being lynched.