Sometimes it seems like this pandemic will never end. We have been teased in the past that things were looking up, especially early in the summer when vaccinations were being rolled out and the numbers of Covid-19 cases, hospitalizations, deaths started decreasing. But then the Delta variant kicked in and we went back into mask-wearing, physical-distancing, and hunker-down mode. Or at least some of us did.

But now a respected team of scientists who form the COVID-19 Scenario Modeling Hub that advises the Centers for Disease Control and Prevention say that the worst really may be over and that their models, under varying conditions, predict that we should start to see declines lasting all the way through March of 2022. 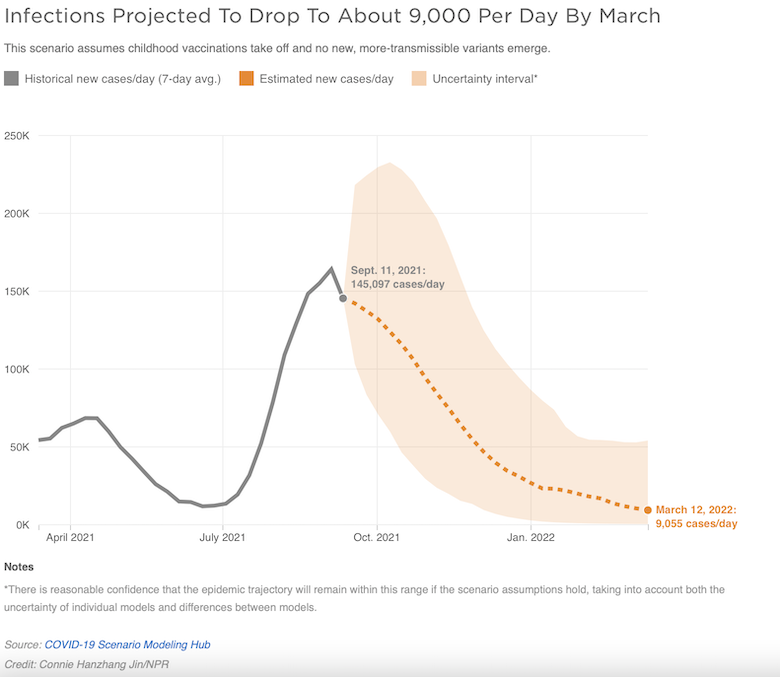 END_OF_DOCUMENT_TOKEN_TO_BE_REPLACED

The US Congress routinely goes through an exercise that to me perfectly captures its lack of maturity. It is the periodic votes on raising the debt ceiling. Doing so enables the Treasury to borrow or print more money so that the government can meet the obligations it has already incurred by past appropriations. Failing to do so will mean that the government will shut down and go into default and not be able to pay, among other things, the interest on the Treasury bills that were issued in the past, and thus would trigger a slide in the country’s credit rating. A default would be so bad that it is expected that the ceiling will be raised, as it always has in the past.
END_OF_DOCUMENT_TOKEN_TO_BE_REPLACED

This cartoon is right about how the wingnuts operate. 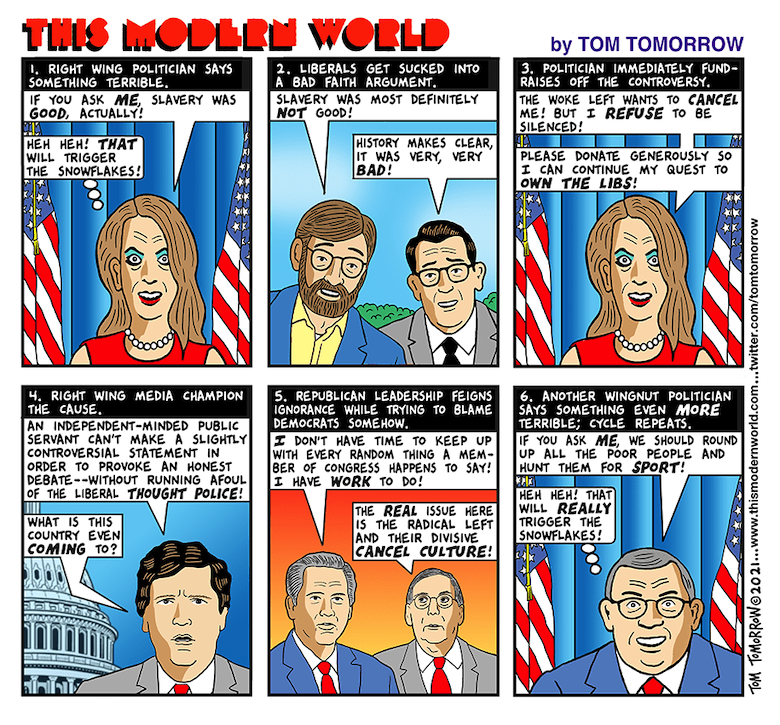 I can see how this strategy can boost fundraising and fire up the base. But it is not clear to me that it is an effective strategy to get votes, apart from the really hard core base. Of course, the primary races tend to be determined by the party faithful so it might help in winning the party nomination. But what about general elections in anything other than in constituencies where people will vote for their party candidate irrespective of whether they actually approve of this kind of behavior or not.

I am not aware of any study that looked into whether ‘triggering the libs’ is an effective strategy in persuading anyone other than hard-core supporters.

Seth Meyers had a funny segment about this.

I was brought up with enough food to eat but wasting was severely frowned upon. You served on your plate what you thought you needed and then ate all of it. That was not an uncommon practice in Sri Lanka and I suspect in many developing countries. That habit has persisted throughout my life so that to this day I almost never throw any food away. Whatever is bought is cooked and eaten. It is a bit of a joke in my family that I will eat food even if it has just started going bad. If cheese is getting moldy, I will cut out the spoilt part and eat the rest. The same with fruits. I ignore the sell-by date and only throw something away if it smells bad or is obviously rotten. I would save even the tiniest amount of leftover food after a meal, put it in the fridge, and then mix it into an omelette or something later and eat it. I actually find such ‘savory’ omelettes very tasty.
END_OF_DOCUMENT_TOKEN_TO_BE_REPLACED

As expected, civil lawsuits have been filed against the Texas doctor Dr. Alan Braid who publicly announced that he had violated the new state law that placed such restrictions on abortions that it effectively banned the practice entirely. The law had apparently not specified that one had to be a resident of Texas to file the case and the two lawsuits (so far) have been brought by one person in Arkansas and one person in Illinois. The latter says he is actually pro-choice and his lawsuit was being pursued with the intention of showing that the law is unconstitutional.
END_OF_DOCUMENT_TOKEN_TO_BE_REPLACED

The wonderful US health system on display.

I wrote last year that the popular prescription that one should walk 10,000 steps a day in order to obtain the health benefits of activity originated as an advertising and marketing scheme and had no scientific basis. Research suggested that one did not need so many steps to get the benefit. But how many would be desirable?

This article summarizes some of the recent recommendations.
END_OF_DOCUMENT_TOKEN_TO_BE_REPLACED

In an earlier post, I wrote about how the Texas anti-abortion law, by authorizing anyone at all to bring a lawsuit against anyone who aids someone in getting an abortion, has greatly expanded the legal notion of ‘standing’, that only those who have suffered a direct injury can seek redress from the courts. This is a reasonable requirement since otherwise the courts could be clogged with people bringing lawsuits on any and all matters whether or not they are at all affected by it.

The need for standing is not explicitly mentioned in the US constitution but over the past century, the US Supreme Court has read that requirement into Article III.
END_OF_DOCUMENT_TOKEN_TO_BE_REPLACED

Texas has passed an extremely restrictive law, effectively eliminating a woman’s right to have an abortion by authorizing any person to sue and collect damages from anyone who provides any kind of assistance to women seeking abortions, and completely stacking the legal deck in favor of the people seeking the bounties.

A doctor in Texas who performs abortions and recalls what it was like in the days before 1972 when abortions were illegal in that state, has decided to challenge the law by performing an abortion and then publicly announcing it.
END_OF_DOCUMENT_TOKEN_TO_BE_REPLACED

One thing I have learned is never to trust where the political sympathies of an electorate are by what I see in my extended neighborhood or what people say in the places I frequent. This is because a natural type of segregation occurs in which people, if they have that flexibility, tend to gravitate towards places where they sense people share their same values. When we moved to the Cleveland area, when we were looking for a place to live, our primary criteria was a location that was racially and economically diverse and had good schools. It was not surprising that we ended up living in a place that was solidly progressive.

Over the three decades that I lived there, while my local community stayed progressive, the state of Ohio drifted rightward, from being a toss-up state.where Democrats and Republicans both had shots at winning statewide office and electoral college votes, to one that now seems solidly Republican and Trumpian. So much so that Anthony Gonzalez, a Republican member of congress who was first elected to congress in 2018 in a district adjacent to Cleveland and was considered a rising star in the party, has announced that he will not be seeking re-election in 2022 because his vote to impeach Trump has led to threats against him and his family and he did not fancy the thought of being in Congress under a party leadership where unquestioning loyalty to Trump is demanded.
END_OF_DOCUMENT_TOKEN_TO_BE_REPLACED