A lot of attention has been paid recently to the abortion law passed in Texas that places such great restrictions on women’s right to choose that it effectively guts the US Supreme Court precedent Roe v. Wade. It prohibits abortions after a mere six weeks after the last menstrual period when many women do not even know they are pregnant and it authorizes ordinary citizens to take anyone who assists a woman to get an abortion (even like driving her to the clinic) to court and get a $10,000 reward for doing so.

The US Supreme Court, while not making a decision on the constitutionality of the law itself, allowed it to go into effect, seeming to buy the Texas Republicans’ argument that because the law does not allow the state to enforce the law but only private citizens, it has prima facie constitutionality. The anti-choice zealots in Texas are exchanging high-fives about their cleverness in crafting a law that they think will pass constitutional muster.

I was particularly interested in that the law (the text is here) seemed to violate the important issue of ‘standing’, that the only people who have the right to bring a lawsuit are those who have suffered some direct injury to themselves. Normally you cannot file suit about an action taken by others against others, however much you may be outraged by the act itself. This is necessary to prevent the courts being clogged with lawsuits.

This article in the Texas Tribune did a detailed point-by-point analysis of the law and it is extremely disturbing.

Texas’ new abortion law – which bans abortions at about six weeks from the patient’s last menstrual period – rests on the actions of private citizens to enforce the law, rather than the government.

While abortion patients themselves can’t be sued under the new law, anyone who performs or aids with the abortion can be sued – and by almost anyone. Legal experts interviewed by The Texas Tribune have said the law dramatically expands the concept of a civil lawsuit and is aimed at keeping providers from using the constitutional right to an abortion under Roe v. Wade as a legal defense.

The law, a near-total ban on abortions, includes several provisions that experts say tilt the scale toward plaintiffs, including protecting serial plaintiffs who could file dozens or hundreds of cases, incentivizing civilians to sue with a $10,000 cash reward if successful and removing defendants’ ability to recoup their legal fees. If survivors of rape become pregnant and seek an abortion, those procedures could become the object of lawsuits.

Legal experts have said the law is a “radical expansion” of standing, which is the legal concept that determines whether one person may sue another, usually in order to get compensation for some sort of injury or harm. The new abortion law requires no such relationship to the case in order to have standing.
…

It’s a very unusual measure in tort law, which is usually used to provide remedies to people who have incurred a harm. Adriana Picon, a senior staff attorney and policy counsel for the ACLU of Texas, said the law “leaves open the courtroom door in Texas.”

Legal experts have said that the concept to expand standing is part of an emerging trend in Republican-dominated state governments that find it difficult to constitutionally prohibit actions they dislike. Instead, such governments empower civilians to sue for civil remedies.

Anti-abortion groups argue that the Texas Legislature can legitimately give anyone standing. State courts are likely to sort out whether the Texas Constitution requires someone to have sustained an injury in order to bring a lawsuit, or if, indeed, the Legislature’s permission is enough to allow people to sue for what lawyers call “generalized grievances,” or harms that weren’t committed against them personally.

The other features of the law that the the article discusses in detail are below and it shows how the law has been stacked heavily in favor of the anti-abortion side and makes it almost impossible to mount a defense.

The law will be challenged. The US department of justice has already announced that it will fight the law vigorously. 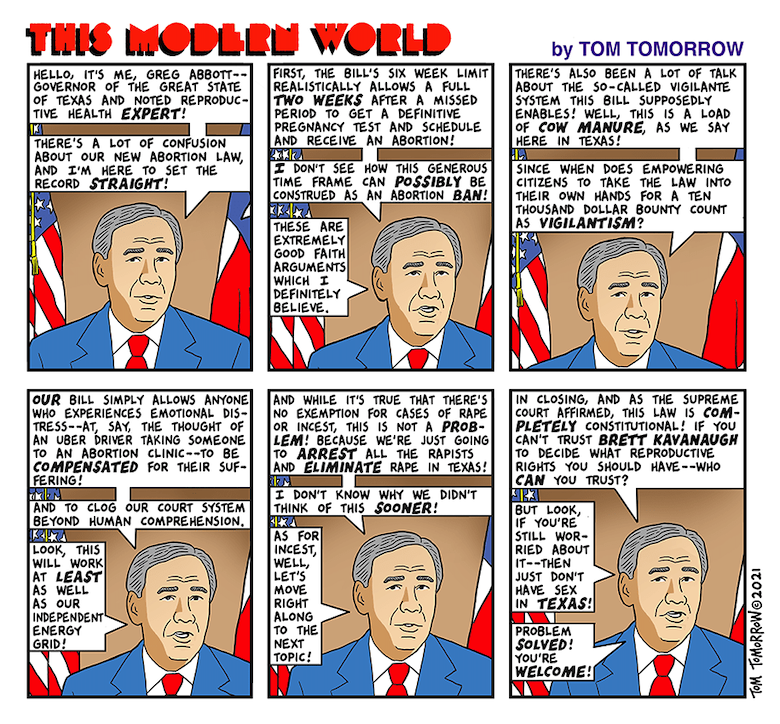