I have described before that I think a good philosophy to live by is “Try not to be a jerk”. While it is more limited in scope and not as elegant or high-minded as some of the more well known ones like treating others as you would like them to treat you, it has the advantage that jerk behavior is easily recognizable in pretty much every situation and thus can be more easily avoidable if one wants to.

So naturally my attention was caught by this article that had the title How to Raise Kids Who Don’t Grow Up to Be Jerks (or Worse). It consists of an interview with Melinda Wenner Moyer, the author of a book that discusses how to raise children to not be jerks. (The book’s title is actually How to Raise Kids Who Aren’t Assholes which is pretty much the same thing.)

Moyer says that the key is helping children develop a theory of mind.
END_OF_DOCUMENT_TOKEN_TO_BE_REPLACED

I hadn’t heard the terms ‘yips’ and ‘twisties’ until reading some of the many articles following Simone Biles’s withdrawal from her events at the Olympics. This article explains what the terms mean.

People who watch the types of sports that are broadcast on a regular basis are more familiar with the yips than the twisties because generally, we only gather to watch champion gymnasts compete every few years. However, people mainly associate the yips with uncharacteristically poor performance on fields or courts leading to errors and low scoring.

However the twisties, which involves a sudden loss of spatial awareness mid-air, can result in serious injury, possibly even death. Most of us heard about it for the first time after other athletes came forward to defend Biles from attacks accusing her of a weak mental fortitude, citing feats from past Olympic medalists as evidence that pushing through physical pain is what makes a champion a champion.

END_OF_DOCUMENT_TOKEN_TO_BE_REPLACED

It is a common tactic of people who like to spread false information but seek to avoid taking responsibility for their statements to disingenuously say they are ‘just asking questions’. 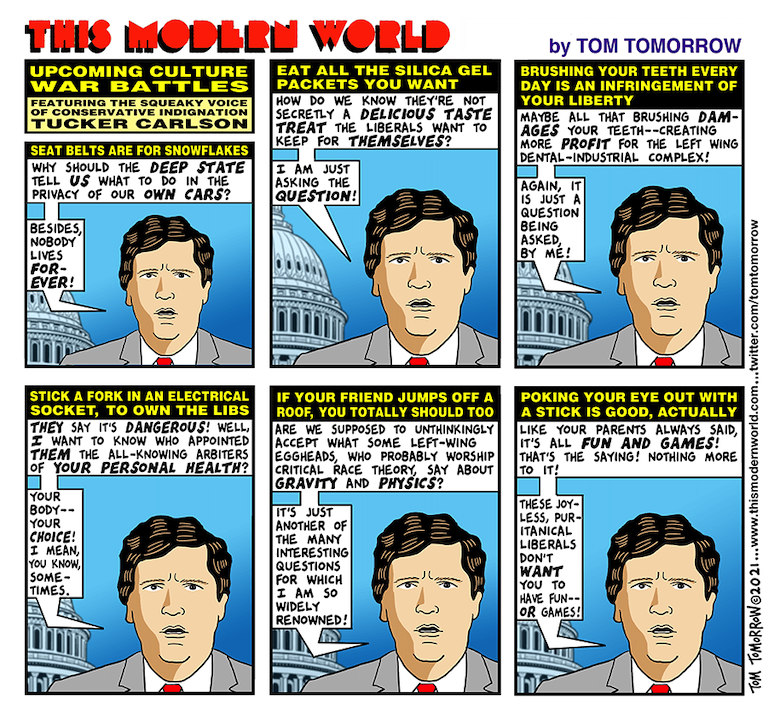 We know that the relationship between climate change and weather is a statistical one, in that rising global temperatures will cause more extreme weather patterns to occur more frequently. But that causal arrow goes just one way, in that we cannot take any particular weather event, however extreme, and unequivocally blame it on climate change. This puts the scientifically minded at a disadvantage when arguing with climate change skeptics who have no compunction about taking isolated anomalous events (such as the recent cold snap in Texas) and using it to proclaim that global warming is not occurring or is a hoax. Most of us refrain from fighting anecdotes with anecdotes.
END_OF_DOCUMENT_TOKEN_TO_BE_REPLACED

I have started wearing a mask again when I go to the bridge center even though everyone has to prove that they are vaccinated before they are allowed to enter. The reason is the revised CDC guidelines that once again recommend indoor masking, especially in areas of high covid-19 incidence, because of the surge in cases due to the Delta variant.

There have been some criticisms of the CDC reversing its policy on masks. While I think that it can be faulted for less than clear messaging, I think the more fundamental problem is one over which they have no control and that is that people have a poor idea of how the scientific process works. People tend to think that scientific conclusions are fixed once and for all once they are arrived at and get unsettled when ‘science’ says one thing at one time and another thing later. But as I argue in my book The Great Paradox of Science, reversals of scientific consensus judgments happen all the time. It is just that it usually happens without the full glare of the media spotlight them so people are not aware of how common they are. In the case of covid-19, we are all getting to witness in real time that scientific conclusions are always provisional and that the scientific community can change its view when the situation changes and new evidence emerges. That is how it should be.
END_OF_DOCUMENT_TOKEN_TO_BE_REPLACED

While much attention is focused on income inequality in the US, a much more glaring discrepancy exists with wealth. On average, the average Black person has just 13% of the wealth of the average white person. This is because most people’s wealth is tied up in their homes but for the longest time, Black families were denied access to buying homes due to racist polices. such as real estate covenants that prohibited the sale of homes to them, that were aided by federal, state, and local governments. As a result, they could not build up their assets and pass them on to their children, which is how much wealth is accumulated.

John Oliver looked at this situation and points out that when it comes to this particular issue, the individual cases of harm done to Black people is quite clear, with some of the victims still alive, which makes the remedy of reparations to right the wrongs, also clear.

The shocking news that gymnast Simone Biles has withdrawn from her events at the Olympics due to mental health issues, following Naomi Osaka’s withdrawal from two Grand Slam tennis tournaments for the same reason, has turned a massive spotlight on the pressure that these top athletes are under. Biles was seen as the marquee athlete of this Olympics, like Usain Bolt and Michael Phelps in previous games, and expected to win accordingly. Those of us who have never come close to being in such stratospheric levels of athletic achievement may find it hard to appreciate the pressure these people are under, expected to perform at their peak under the close scrutiny of large numbers of people. The cameras are on them all the time, even when they are just stretching or chatting to people.
END_OF_DOCUMENT_TOKEN_TO_BE_REPLACED

On Tuesday, August 3, Democratic voters will pick their candidate to fill the Ohio congressional seat that fell vacant when Marcia Fudge became secretary of housing and urban development. I wrote about this race before, how it reveals the deep neoliberal commitment of the Democratic party establishment, and the need to elect outspoken progressives like Nina Turner, who was a strong supporter of Bernie Sanders. Matthew Cunningham-Cook writes that the right wing elements within the Democratic party establishment, such as Hillary Clinton and James Clyburn, are joining forces with wealthy Republican donors and the members of the Israel lobby to support her opponent Shontel Brown.
END_OF_DOCUMENT_TOKEN_TO_BE_REPLACED

The Cleveland baseball team has finally announced the new team name, replacing the Indians with the name Guardians. While I was glad that the old offensive name was gone, I was underwhelmed by the new one, seeing it as somewhat unimaginative. I imagined that it was chosen because the new name rhymed with the old one and thus looked similar when written in cursive script as the new logo

But Steven Litt writes that the name has a deeper meaning and is very appropriate.
END_OF_DOCUMENT_TOKEN_TO_BE_REPLACED

Anti-vaxxers encourage people to do their own research on the vaccines. Doing research on anything is a good idea but you have to know how to do research. This is particularly important in the internet and social media age where one is flooded with information and most of it is of highly dubious quality. It is not simply a question of how many times a particular point of view one comes across or whether one personally knows the sender of the information. Those are irrelevant. One has to learn how to evaluate the credibility of sources and be aware of how risks should be evaluated.

From friends and relatives I get forwarded articles that have been circulating on the internet, asking for my opinion. If the article is unsigned or not from credible institutions or has no links to original sources, then I deeply discount what it says. The anti-vaxxers have been flooding the zone with misinformation and thus their urging people to ‘do your own research’ without telling them how best to do it is somewhat disingenuous since it will likely result in people arriving at faulty conclusions.
END_OF_DOCUMENT_TOKEN_TO_BE_REPLACED