Last month, five lions in a an enclosure in the Taronga Zoo in Sydney managed to get out of their enclosure and explore the neighborhood.

People in Woburn, north-west of Boston, have been subjected to a barrage of attacks and intimidation by a group of five wild turkeys, with the situation forcing some to take up improvised weapons and residents reporting being trapped in their homes.

The turkeys, led by a male bird nicknamed Kevin, arrived two years ago. Initially the birds were docile, but as time passed they have become ever more pugnacious, leaving Woburners fearful for their safety and forced to adapt their behavior.

“They don’t let you out of your house,” said Meaghan Tolson, who lives in Woburn and has named the turkeys.

“They peck at cars, they stop traffic. They go after kids on bikes. If you’re walking or jogging, or anything like that, they come for you.”

Another article describes how this is a growing problem in many towns as the wild turkey population grows.

The reason for my interest is because of my own bad experiences with wild turkeys that I described here, here, and here. My actions in the face of those turkeys were, to put it charitably, less than heroic and so it made me feel better to realize that my own cowardly behavior when confronted with what are essentially overgrown chickens was not that uncommon. It appears that wild turkeys can cause serious injuries so avoidance and defensive behavior is advised.

Today is Thanksgiving day in the US, the day when families and friends get together to share a traditional meal. There is some controversy over the holiday but what I am concerned about here is the date. The date of the holiday has changed over time, sometimes for purely commercial reasons.

From the time of the Founding Fathers until the time of Lincoln, the date of observance varied from state to state. The final Thursday in November had become the customary date in most U.S. states by the beginning of the 19th century. … Modern Thanksgiving was proclaimed for all states in 1863 by Abraham Lincoln [who] … set national Thanksgiving by proclamation for the final Thursday in November.
…
On October 31, 1939, President Franklin D. Roosevelt signed a presidential proclamation changing the holiday to the next to last Thursday in November in an effort to boost the economy.[36] The earlier date created an extra seven days for Christmas shopping since at that time retailers never began promoting the Christmas season until after Thanksgiving. But making the proclamation so close to the change wreaked havoc on the holiday schedules of many people, schools, and businesses, and most Americans were not in favor of the change. Some of those who opposed dubbed the holiday “Franksgiving” that year. Some state governors went along with the change while others stuck with the original November 30 date for the holiday, and three states — Colorado, Mississippi, and Texas — observed both dates. The double Thanksgiving continued for two more years, and then on December 26, 1941, Roosevelt signed a joint resolution of Congress changing the official national Thanksgiving Day to the fourth Thursday in November starting in 1942.

Since nowadays retailers have started promoting Christmas well before Thanksgiving, the rationale for keeping it as the fourth Thursday in November no longer exists and the dates of the two holidays can be decoupled.

I argue that it would make more sense to shift Thanksgiving to (say) the fourth Thursday in October. There are several advantages for such a shift. A big one is that this is one of the biggest travel periods of the year and the weather is much milder in October, making travel much less risky. There have been many Thanksgiving horror stories where massive snowstorms have shut down airports, grounded flights, and created hazardous driving conditions leaving many people stranded and utterly miserable. Another reason is that currently there is a long stretch of time, between the Labour Day holiday on the first Monday in September and Thanksgiving on the last Thursday in November, where there are no holidays. Having a holiday in October would provide a nicer break. Finally, Christmas is also a big family holiday and currently Christmas comes quickly after Thanksgiving, too quickly in my opinion.

So that’s my case for shifting Thanksgiving to October.

It is curious that given that although going to the bathroom is a basic human function, society does not make it easier for people to do so when they are out of their homes. Some activists are trying to change that, by criticizing the statement by Starbucks CEO suggesting that they might close their bathrooms to non-customers.

“Let the people go!” an activist group is telling Starbucks after the coffee chain’s boss threatened to close down its bathrooms.

The American Restroom Association is marking World Toilet Day on 19 November, an awareness-raising day started by the United Nations to celebrate toilets and advocate for proper sanitation systems, by calling on Starbucks to keep its restrooms open to the public.
…

While Starbucks has not officially changed its bathroom policy after Schultz’s comments, the American Restroom Association (ARA), which advocates for safe and well-designed public restrooms, notes that some Starbucks locations have closed their restrooms to the public.
END_OF_DOCUMENT_TOKEN_TO_BE_REPLACED

(This is an edited and updated version of a post I wrote back in 2014.)

In the urban areas of Sri Lanka, schools tend to be mostly single-sex K-12, and among the boys’ schools there were intense sporting rivalries. During those games, boys would show their support for their teams using generic cheers that were common to many schools. These cheers originated long before my own time. One of them was used when one’s team had suffered a setback and was meant to rally one’s side to show that this was not a cause for concern. It consisted of the following words set to music.

Hurrah for the Mary! Hurrah for the lamb!
Hurrah for the [school name] boys who do not care a damn!
Now everywhere that Mary went the lamb was sure to go
Shouting the battle cry of freedom!

Each school would simply insert their own name, making the cheer available to any school.

This cheer made no sense whatsoever even by the extremely low standards of Sri Lankan school cheers. But the last line was particularly puzzling since, apart from being absurd (a lamb shouting?) it was a complete non-sequitur. I used to vaguely wonder how and where this cheer could have possibly originated but after leaving school, I forgot both the cheer and the puzzle of the last line.
END_OF_DOCUMENT_TOKEN_TO_BE_REPLACED

I do the daily puzzle known as Wordle. For the three people in the country who have never heard of it, it consists of a hidden five letter word and one tries to guess the word in as few tries as possible, with a maximum set at six. After each guess, you get three kinds of feedback: a letter is highlighted green if it is the right letter in the right location; yellow if it is a letter that is used in the word but appears in the wrong location, and grey if the letter is not used at all. The puzzle is similar to the game Master Mind. The answer is from a list of 2309 common words but guesses allow from a pool of about 15,000 words (fewer than the average vocabulary which is estimated to be between 20,000-35,000 words), many of which can be quite obscure.

The puzzle is a little diversion during the day that takes about 10 minutes at the most. But it has attracted an enormous amount of interest and this article looks at the strategies that computers and expert players use to try and get the word in the least number of tries. Computers take an average of 3.41 tries to get the word while expert players average slightly less than four.
END_OF_DOCUMENT_TOKEN_TO_BE_REPLACED

A painting by Piet Mondrian has been hanging upside down for 75 years with no one noticing. Here is the piece. 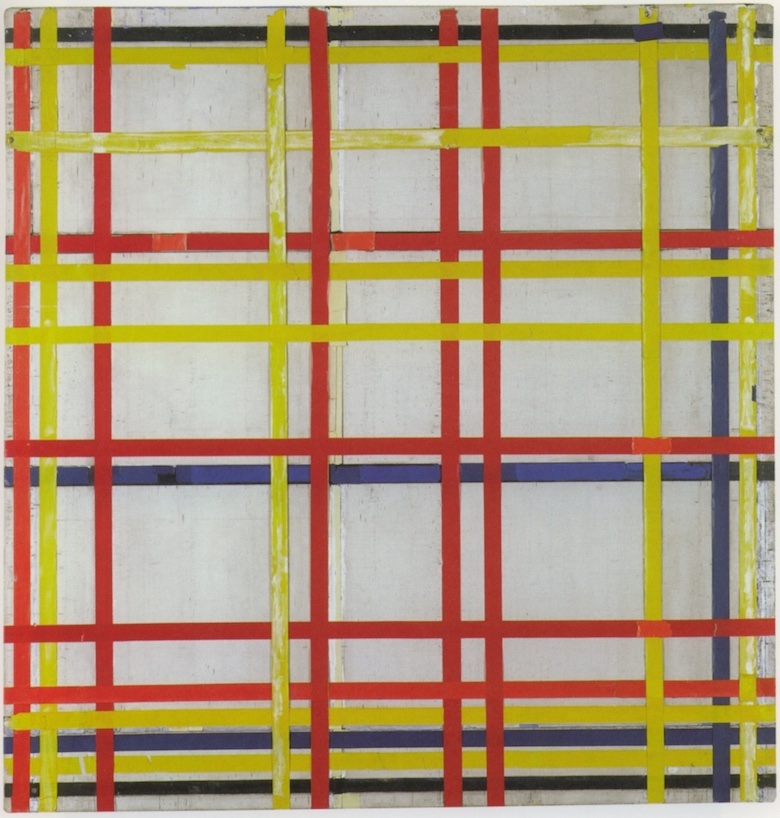 END_OF_DOCUMENT_TOKEN_TO_BE_REPLACED

The late Anthony Bourdain shot to fame as a celebrity chef following publication of his book Kitchen Confidential that went behind the scenes in the kitchens of fancy restaurants. That book grew out of a 1999 article Don’t Eat Before Reading This that he published in The New Yorker. It is a wildly entertaining account. Here are some excerpts.

When a kitchen is in full swing, proper refrigeration is almost nonexistent, what with the many openings of the refrigerator door as the cooks rummage frantically during the rush, mingling your tuna with the chicken, the lamb, or the beef.
END_OF_DOCUMENT_TOKEN_TO_BE_REPLACED

There is something heartwarming about efforts to save these big mammals. This one had got fishing gear stuck in its mouth.

For most of us, our address consists of a street number that makes it easy to find. But books that are set in England long ago or in rural areas will frequently refer to a house by the name given to it by a past resident, like ‘The Larches’. There did not seem to be any street numbering system and I used to wonder how people unfamiliar with an area found a house other than walking up and down the street looking at the house names or asking any local whom they met.

The lack of the traditional street numbering system is also seen in Japan but there is an alternative system that, while seeming strange to outsiders, has a definite structure that enables one to zero in on the location. Unlike the system in the US where the address starts with the smallest unit such as the name of the person, then proceeds to the house number and then to the street, then the city, then the state, and then the country, in Japan it goes in the reverse order, with the largest unit such as the city coming first and the name coming last. It seems to work well. I hear that Japan has a different way of entering a destination in its GPS system in order to find places, as this video describes.
END_OF_DOCUMENT_TOKEN_TO_BE_REPLACED