Chilling. Putin is decrying the influence of the degenerate West, with their “foie gras, oysters, and gender freedom”, but the most terrible line is this one: “I am convinced that such a natural and necessary self-purification of society will only strengthen our country, our solidarity, cohesion, and readiness to respond to any challenges.” Uh-oh. “Purification” is a scary word. The dictator of Russia is talking about cleaning house — here come the purges, in response to his embarrassment in Ukraine.

That is exactly the sentiment that resonates with our authoritarian right wing. If only we could end gender freedom and purify the American people, we would be stronger! The white supremacists, like Nick Fuentes and Marjorie Taylor Greene and Paul Gosar, are eating this stuff up. You know you’re way out on the fringe when even a dumbass like Herschel Walker is backing away from you. 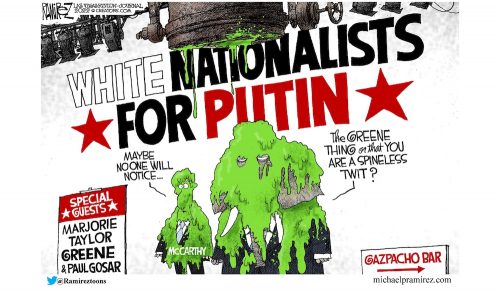 OMG, they’ve also lost wacky conservative cartoonist Michael Ramirez! What next? Will Ben Garrison say something nice about a Democrat?

Conservative Christian Comedian is an oxymoron » « Some celebration