I did not enjoy making this video at all, not because of the content, because of all the copyright bullshit YouTube put me through. I use a few very short clips from the History Channel show, Ancient Aliens, specifically to criticize the stupidity therein, and I guess the History Channel is very protective of their idiocy, and the thing kept getting flagged. I finally said screw it, demonetize it, I’m not going to let that channel of lies and foolishness push me around.

So here it is, for what it’s worth. I hate the History Channel, alien pseudoscience, and Giorgio Tsoukalos even more now.

Do I include a sorta partial script of what I said, below the fold? Yes, I do.

I was slumming a bit and watching a bit of a very silly program, Ancient Aliens, on the History Channel. Don’t worry, I’m not losing my mind, I’m just one of those people who needs a little background noise when I’m working, and really, anything on the History Channel is pure noise…although every once in a while something percolates up through my auditory nuclei to trigger a cortical reaction. In this case, I was doing some grading when I heard this introduction.

[clip announcing a discovery out of Kazakhstan 0-33s]

Oh, hey, I remember that paper! It was terrible. Ancient Aliens got it wrong, though. SchCherbak and Makukov didn’t look at the genome at all – they looked only at the genetic code, which is entirely different but are often confused by lay people. That’s the first clue that either no one read the paper, or did and didn’t understand it. They also didn’t find a precise code or mathematical patterns or a symbolic language.

Who? I had to look him up. He’s a talk radio host who calls himself the Truth Warrior, who has lately been deplatformed because he kept pushing nonsense about the coronavirus. He’s a twit. He doesn’t understand biology. I don’t think he understands the difference between the genome and the genetic code, either.

The real thrill, though, is the appearance of this well known clown.

There are a few problems with his interpretation. No, the genetic code is not assumed to be random – just looking at it, we can see simple patterns. He also gets the probability wrong: the odds of the specific genetic code we use occurring by pure chance is not 1 in 10 trillion, but 1 in over 10 to the 115th power. Again, though, that’s irrelevant because we know it isn’t pure chance.

He also makes an assumption that we’ll find evidence of ancient aliens have meddled in our DNA, when exactly the opposite has occurred, and what we’ve found instead is evidence of common descent and our relatedness to other earthly organisms. He might be surprised to learn that the shCerbak & Makukov paper, even if its interpretations were entirely correct (they aren’t), reinforces the idea that all life on earth is related.

First, though, let’s clarify a significant distinction: the genome vs. the genetic code.

The genome is the sequence of nucleotides in the entire nuclear chromosome set. In us humans, that’s about 3 billion nucleotides, those As, Cs, Ts, and Gs lined up in the DNA. We sequenced the human genome in the late 1990s, and we can do fun stuff like comparing the arrangements of nucleotides in our cytochrome C gene with the cytochrome C genes of chimps, flies, frogs, and bacteria. It’s obvious from the context that that’s what the goofballs on Ancient Astronauts are thinking of.

The genetic CODE is altogether different, and was worked out 40 years earlier. The code is how a trio of nucleotides in DNA, called a codon, is translated into an amino acid in a protein. This is the genetic code. 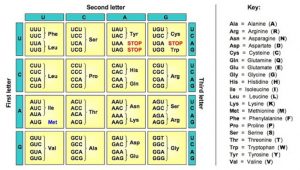 What the genetic code says is that the RNA is read 3 nucleotides at a time, and that each triplet specifies an amino acid. So UUU is translated to Phenylalanine, at the top left, while GGG, bottom right, means Glycine. That’s it! It’s a way to encode 20 possible amino acids (and some punctuation) with four possible nucleotides. Figuring this out was a triumph, and it allowed us to determine the sequence of a protein from the sequence of nucleotides in a gene.

A subsequent discovery is that all organisms on earth use this same genetic code (there are a few special case exceptions). So UUU in a human codes for phenylalanine, and UUU also codes for phenylalanine in an avocado or a mushroom or yeast. The translation process is universal! That makes sense, because a mutation that changed the code would change how every single gene in the organism would be translated. The code is basically locked in from the very first organism that evolved it, and this is further evidence for common descent.

Shcherbak and Makukov do not dispute that, and in fact embrace it. Every living thing on earth uses the same code, no problem. The question is…why this specific code? Why does UUU code for phenylalanine, and not lysine? Why is there a pattern, where for instance every codon that starts with CC encodes proline, with the third nucleotide making no difference? Why are there exceptions, like with the UU pair coding for two different amino acids, phenylalanine and leucine, depending on what the third nucleotide is?

Those are actually good and interesting questions, and biochemists have been trying to answer them for a while. I’d suggest that it’s evidence that the original code consisted of two nucleotide pairs, which was only sufficient for 16 possible combinations, inadequate to specify 20 amino acids, and that the third nucleotide in the codon was only later incorporated to add additional specificity. There are also interesting ideas floating around that the associated RNA dinucleotides were actually catalytic elements specific to synthesis of their associated amino acids, but that’s not what the Shcherbak & Makukov paper are suggesting. 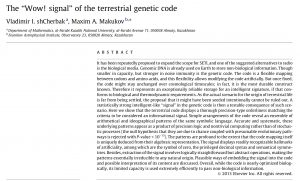 Instead, they argue that the genetic code was specifically set up by intelligent designers to have particular mathematical properties, peculiar properties that are not an essential part of any code, but were placed there to get the attention of any intelligent species that evolved to puzzle out the code. They call it the “Wow!” signal. It doesn’t carry any useful information other than one message: it’s a signature of artificiality, nothing more. It was designed to have a particular mathematical meaning that says it’s just too pretty and elegant to have been a product of chance. 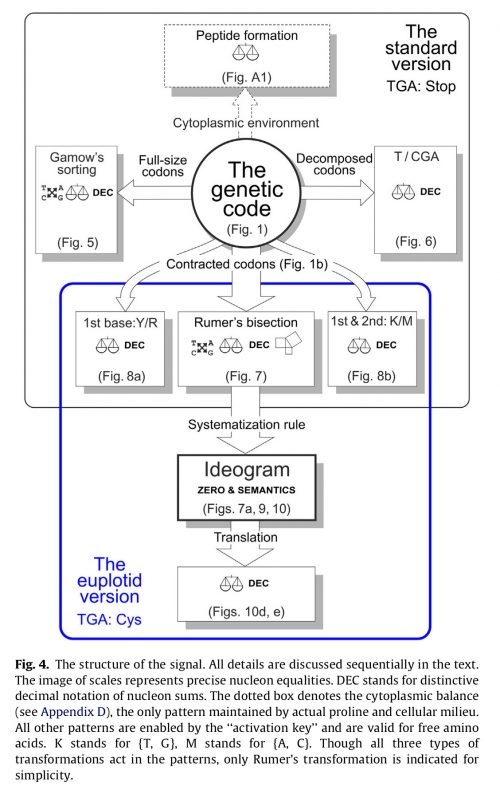 I disagree, obviously, and I don’t think they made an adequate case – and that any code could get the kind of post hoc rationalization they give it. It reads like a very silly and rather pompous paper that uses numerology and odd twisty diagrams like this one to make a strained claim with only handwavey evidence.

But here’s the problem with the way Ancient Aliens tries to use it: it’s a universal code. All life on earth uses the same code. You can’t use it to claim there is a special destiny written into our genome, because clams and spiders all carry the same code as we do! The code is entirely neutral on the fate of subsequently evolved genomes.

What Shcherbak and Makukov instead try to claim is that this is evidence of a singular panspermia event early in the history of Earth, that we were seeded with organisms with this unique code because the code is resistant to evolutionary change and would be a marker to any species that later evolved to let them know who their maker was. I don’t think it’s sufficiently special to do that, however, and would favor the idea the our code is a product of chance and biochemical necessity.

However, I did think of one science fictional premise for it. If the code is arbitrary and an esthetic and mathematical choice by a designer, and if it is locked in by hard selection as soon as an organism adopts it, then it could be a useful brand marker to lay claim to all the descendants of the original designed stock. The Xordaxians could have designed our specific code to distinguish us from any worlds seeded by their competitors, the Nihilanths. They were planning very far ahead, so they’d know if they landed on Earth 4 billion years after the seeding, they’d know if they saw UUU coding for phenylalanine, rather than, say, arginine, that meant we were “theirs” and not the Vorlon’s.

Anyway, the real message here is that the numerology of Shcherbak and Makukov does not make the point they think it does, and that the writers of Ancient Aliens, and their talking heads like Whitehead and Tsoukalos, are friggin’ idiots. But you already knew all that, right?

All right, that’s it for this week. Now normally I’d leave you with some lovely drone footage of my part of the world, but my part of the world has been afflicted with cold and high winds lately, so I chose to stay indoors where it’s warm and calm. Instead, you’ll just have to enjoy the names of my patrons floating by. You should enjoy that, these really are wonderful people. Should I remind you that I do have a patreon account, at http://patreon.com/pzmyers, and I would greatly appreciate it if you’d drop a tip in there. I’m cheap, I don’t ask for much, but it does help counter some legal expenses we’re trying to smack down.
Also, feel free to leave suggestions for further topics I should address. YouTube is so full of anti-science nonsense, I’m more overwhelmed by the vast numbers and magnitude of the foolishness here, so you help me narrow it down.
I am still planning to start another series where I just talk about the cool science stuff I enjoy. I even have a name picked out: “Evo Devo Diary”. The only thing holding me back right now is work obligations. I’m trying to finish up a long painful semester, and just the workload for my day job is keeping me worn out.

Aliens are always fun » « Living next door to the worst