Here’s an entertaining pastime for when you are getting cabin fever: find people on the internet who are worse off than you. It’s easy! So easy, it’s easy to tell yourself things aren’t so bad.

An example: Julia Whitcomb has been trapped at sea for a month in this little windowless cabin. 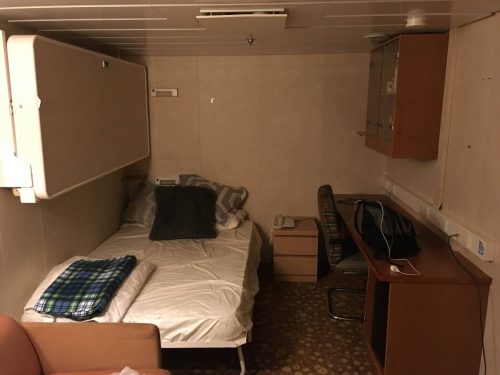 Cruise companies are allowed to disembark and repatriate people still trapped on ships around the U.S. by private transportation as long as their executives sign an agreement with the U.S. Centers for Disease Control and Prevention that holds the companies accountable for the process. They are refusing to do so.

In conversations with the CDC, cruise company officials have complained that arranging private transportation for disembarking crew is “too expensive,” according to a spokesperson for the agency.

The standoff is preventing about 100,000 crew members and some passengers from leaving cruise ships lingering in and around U.S. waters, including dozens of U.S. citizens. Crew members still stuck on board say they feel like an afterthought after watching their companies move mountains to repatriate passengers on charter flights and other private transportation after the industry was shut down on March 13. Only a handful of ships still have passengers on them, including Carnival Corporation’s Coral Princess, floating off of South Florida.

Remember this, next time you see an ad for a cruise in some exotic, beautiful place. There is a range of possibilities here. You could have a wonderful time, putting on pounds at the buffet, drinking lots of sickly sweet alcoholic drinks on the deck with strange people. Or you could spend the whole time vomiting in your cramped cabin as norovirus sweeps through your ship. Or you could get quarantined and end up wandering the seas like the Flying Dutchman, no end in sight, as the cruise line stonewalls on signing paperwork that would set you free.

It’s like gambling! If you’re one of the people who likes to gamble, you should sign up for a cruise!

In the game of “could be better”, the government refuses to bail out all these foreign-registered vessels, the cruise lines all collapse in bankruptcy, and the ships are all sunk to provide artificial reefs for wildlife. But first they let all their hostages off. Maybe the owners could be locked up in first-class cabins before the scuttling?