When I was in high school, the Vietnam War was still going on, and remarkably, it was never discussed in any of my classes. I suspect that if we had, any conversation would have been strongly shaped by those authority figures, the teachers, and I had a good idea that most of them were middle-of-the-road, conservative leaning people who would have praised the American government — or worse. I knew the PE coach would constantly play the “Ballad of the Green Berets” and praise John Wayne as an ideal American. Fortunately, that meant I got most of my training in the ethics of war from Mark Twain, Kurt Vonnegut, Bob Dylan, Creedence, Pete Seeger, and CSNY.

Here we are now, 50 years later, and I’m afraid that the loudest voices expressing opinions about war are Fox News, Ben Shapiro, and Charlie Kirk, who are all, I’m afraid, jingoistic assholes. The counter-culture lies bleeding on the ground, wrecked by the profit motive, and if we rely on the populist expression of thoughtful sentiment from mass media outlets like YouTube, I guarantee that we are fucked. One of the failures of the atheist movement is that it ought to have been a solid platform for global humanist ethics, but do you think Sam Harris, Richard Dawkins, or any of the major atheist organizations are going to condemn our current actions? They’re most likely debating whether they ought to express an opinion on these matters, or gearing up to exult over the deaths of Muslims.

At least Nathan Robinson is talking sense, giving clear lessons in how to avoid being swayed by the deluge of war propaganda we’re swimming in right now. Follow his lessons, and you’ll see all the lies you’re being told.

He even criticizes the approach our Democratic candidates take. Far from being the terrorist-appeasing saps that the Right would like to paint them in, they’ve swallowed a lot of the pro-war justifications as implicit in their premises.

We have to be clear and emphatic in our messaging, because so much effort is made to make what should be clear issues appear murky. If, for example, you gave a speech in 2002 opposing the Iraq War, but the first half was simply a discussion of what a bad and threatening person Saddam Hussein was, people might actually get the opposite of the impression you want them to get. Buttigieg and Warren, while they appear to question the president, have the effect of making his action seem reasonable. After all, they admit that he got rid of a threatening murderer! Sanders admits nothing of the kind: The only thing he says is that Trump has made the world worse. He puts the emphasis where it matters.

I do not fully like Sanders’ statement, because it still talks a bit more about what war means for our people, but it does mention destabilization and the total number of lives that can be lost. It is a far more morally clear and powerful antiwar statement. Buttigieg’s is exactly what you’d expect of a Consultant President and it should give us absolutely no confidence that he would be a powerful voice against a war, should one happen. Warren confirms that she is not an effective advocate for peace. In a time when there will be pressure for a violent conflict, we need to make sure that our statements are not watery and do not make needless concessions to the hawks’ propaganda.

We saw it happen with Vietnam and Iraq — we got this incessant messaging that the Other Side was Evil, making it impossible to support anything but total war unless you wanted to be painted as a traitor, and look what happened: we ended up in these futile, bloody wars that accomplished nothing other than to make defense contractors rich. Now it’s happening again. The stock market is happy, people are implicitly justifying assassination because the victim was Evil, and our president, echoed by the gullible media, is spewing nonsensical jingo nonstop.

It’s a good time to stop and ask ourselves how much of our lives are being wasted at war, and how little we’ve accomplished, and how much the USA is hurting the world. 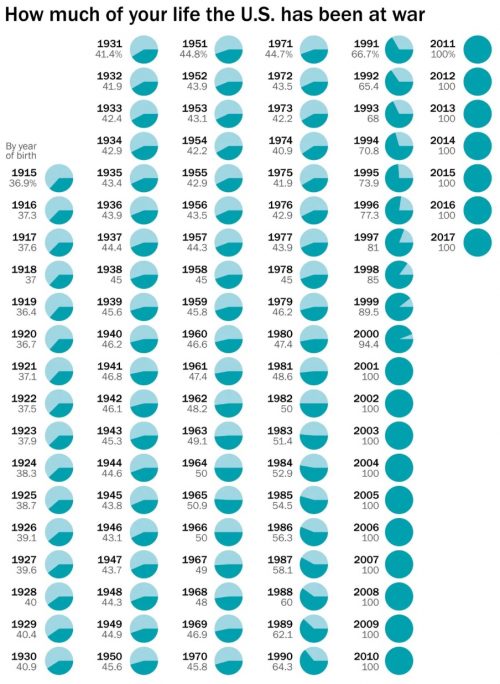 Pay attention this time around, people.

Some folks are born made to wave the flag
They’re red, white and blue
And when the band plays “Hail To The Chief”
They point the cannon at you

How to make science more inclusive » « No spiders!