We can be better, and the Society for Integrative and Comparative Biology shows how it’s done. Their journal published an article describing the steps they were taking to make SICB more inclusive and representative, and show the state of affairs in their membership. 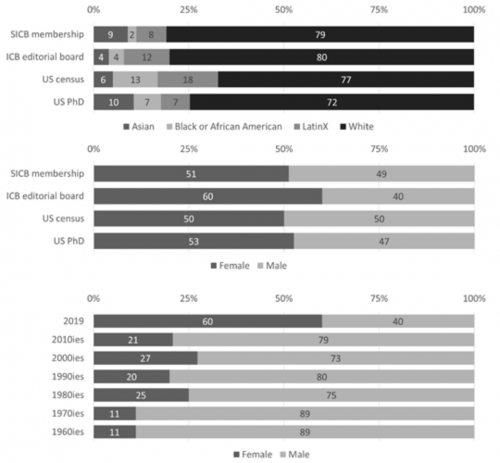 The top graph is the ethnic distribution, and while the percentage of people of color in the society is somewhat lower than it is in the population of Ph.D.s, and significantly lower than the overall population, the key thing is that the population in leadership roles, that is the editorial board of their journal, is proportional to the population in the general membership. That sets the direction they’ll be taking.

The second graph is the gender distribution, and it’s roughly a healthy 50:50; maybe women are a little over-represented on the editorial board, but that’s also a smaller population with more variation. It’s worth noting, too, that over half the population of Ph.D.s in the country are women, so you’d better start paying more attention. Before the usual neandertals start whining about how women are in more ‘soft’ disciplines, note that over half the population of SICB, a highly technical field, are women. I should also point out that it doesn’t matter what discipline you’re talking about, all those non-STEM fields also require rigor and discipline and hard work.

The real eye-opener is that third graph, which shows the history of SICB. Sixty years ago, it was a very ‘masculine’ organization, with only about 10% of the SICB editorial board women; it rose to about one quarter women in the 80s, surging abruptly to 60% this year. That is a big deal. Changing the gate-keepers opens up new opportunities.

Researchers from non-prestigious institutions or minority groups face hurdles in publishing and in obtaining funding; for example, female scientists publish relatively less and get fewer citations than their male counterparts due to bias, such as gender differences in self-citation. Just as female and non-white authors remain underrepresented in the USA, so do authors from low-income and Global-South countries. In many scientific areas male, majority ethnic, and US scientists remain over-represented as gatekeepers (peer reviewers, editors) and lead authors. Although editorial boards have become more inclusive, most journals in the life sciences are still led by editors from US institutions and by men: in 2018, of the top 100 journals in life sciences as ranked in a 2009 study, 78 had a male editor in chief and 68 had an editor in chief affiliated with a US-based institution. Of the 22 female editors in chief, 17 were affiliated with US-based institutions. In contrast, women made up more than half of all PhDs granted in the USA in 2017 (Fig. 1), and the USA granted fewer than a quarter of doctoral degrees worldwide in 2018.

I’ve been to SICB a few times (not as much as I’d like, but their January annual meeting time doesn’t fit my schedule well), and there’s always been a lot of interesting work presented there. The directions they’re taking only make me want to go more often.

I am still in Colorado, although Orac is making me regret it » « You ain’t no fortunate one