I hope everyone realizes that throwing out Trump is only the first step, and probably the easiest one, in the necessary revolution? 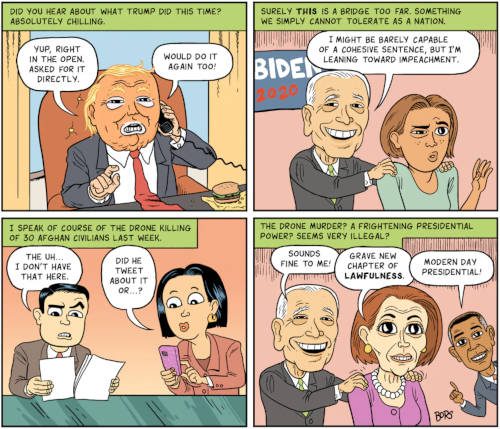 In Afghanistan, in the lead-up to national elections later this month, at least 30 civilians were killed and 40 wounded late Wednesday after U.S.-backed Afghan security forces launched an air raid on farmers in eastern Nangarhar province. A local official said a drone attack was aimed at a hideout used by Islamic State fighters but instead killed farmworkers who’d finished a hard day’s labor harvesting pine nuts.

That won’t end when Trump is in prison. We’ve got a lot of work to do.

#SpiderSunday: Jenny By-The-Front-Door » « An honest endorsement from Bernie Sanders in 1996