I’ve been trying to keep an eye on the spiders living outside my house as fall transitions steadily into winter. It’s mildly tragic — the thriving summer population of Parasteatoda has been declining, and part of it, I suspect, has been competition and predation, and perhaps a bit of starvation. The mosquitos aren’t quite as thickly swarming as they were in the heat of the summer, and the funnel web spiders, with their grand sheets of webbing, have been edging out the cobweb spiders. The one I called Judy With-The-Big-Leaf who had captured a large, curled, dead leaf and was nesting inside it on the north corner of my house is gone now, and in her place are a couple of funnel webs with their silky tunnels extending in the gap between the siding and the rain gutters. I’ve noticed that Agelenopsis begins with web building down near the ground and expands upwards, so the only Parasteatoda left are in more elevated locations. Poor Judy, she built her nest fairly low to the ground and was overtaken by pushy late-comers.

Jenny By-The-Front-Door, on the other hand, has built a fortress on the wall above the front porch, at about chest height on me, and there don’t seem to be any competitors near by. She’s been building. Wind-blown leaves and seed pods are her construction material, and also some grainy clumps of, I think, insulation that were lying on the ground. She’s actually hoisted them up about a meter and a half to incorporate them, and has been stitching everything together with silk. Here’s her nest as it currently stands. 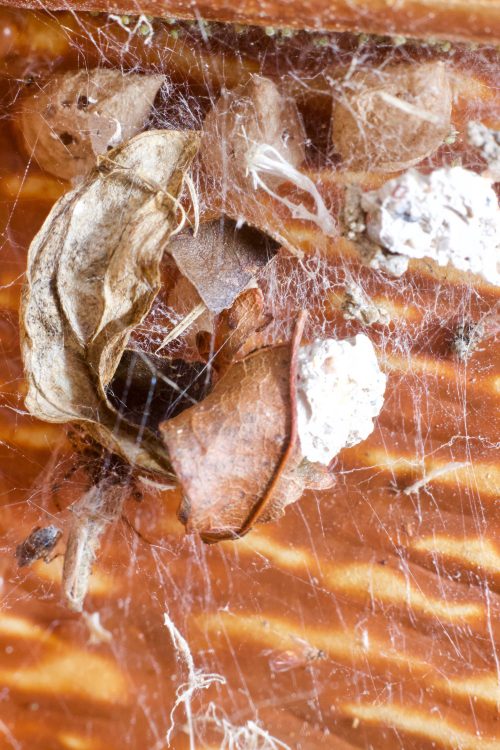 Can you spot her? I’ll reveal her location below the fold.

She’s not up top. You can see three egg sacs lined up along the top of the nest. 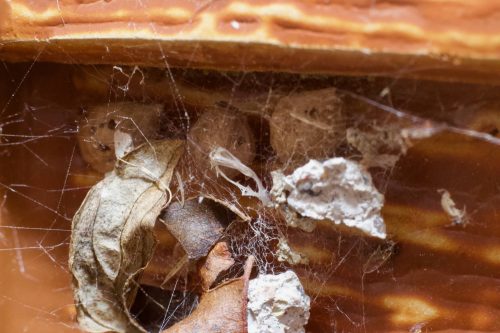 Jenny is a successful mother. Up close you can see that all three egg sacs have neat little holes cut in them — that’s where her spiderlings all emerged and scattered away. I think there might be a fourth egg sac buried deep in the middle of the nest, but I’m trying not to disturb her too much.

Here’s Jenny By-The-Front-Door! She’s hidden behind a cloud of silk and some other debris, but you can see her legs poking out. 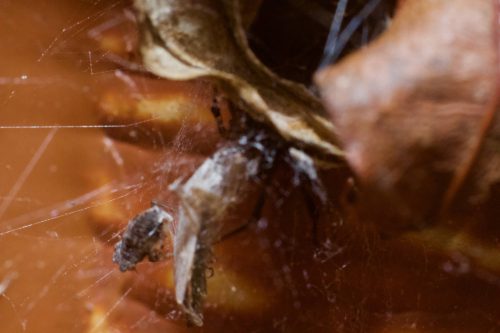 She was easier for me to spot, because those legs were moving. She was hauling that long leaf into position, slowly trying to tie it in to the overall design. The whole structure is becoming increasingly elaborate, to what end I don’t know. Winter is coming. I don’t see how it could keep her warm — I’m checking the temperature with a laser thermometer, and it’s still at about 12°C, or the ambient temperature. It’s going to drop to at least -20°C at some point this winter, and I don’t know how Jenny By-The-Front-Door can possibly survive that. Or maybe she has eggs that can? Or of her numerous progeny, some will have found a warmer, safer refuge and her line will go on?

My plan is to watch and leave her undisturbed, and maybe, if the nest is still there, remove it come the spring and warm it up in the lab to see if anything still lives. I’ll be surprised if anything survives a Minnesota winter, though.

Jenny By-The-Front-Door is trying, anyway. You’ve got to respect that.

P.S. I’m also keeping an eye on Jackie Near-The-Garage-Door, who hasn’t bothered to build any kind of nest at all. I’m periodically checking inside the garage, but it’s shockingly barren right now. It’s sad, like watching all your friends slowly slipping away.