People are crawling out of the woodwork to defend that bogus Boghossian hoax and they’re making some awesomely bad arguments to do so. Here’s one guy who makes a sweeping dismissal of all of the social sciences because few of their journals are highly ranked.

There is a curious lack of social science or humanities journals in the top 100. For instance, there is only one journal dedicated to psychology. If business and economics are counted, then a total of 12 of the top 100 journals cover the social sciences. (Put another way, there are more top 100 journals covering the biomedical subdisciplines of cell biology/microbiology/molecular biology than all the social sciences combined.) SJR considers Administrative Science Quarterly (which we classified as a business journal) to be a sociology journal, so it represents the one sociology journal in the top 100.

There are many reasons for that. But one of them certainly is that the quality of the research just isn’t very good. That’s why penis hoax articles can get published.

That’s a stunningly stupid interpretation. How stupid? Well, he has helpfully organized the list of top 100 journals in descending order for us. 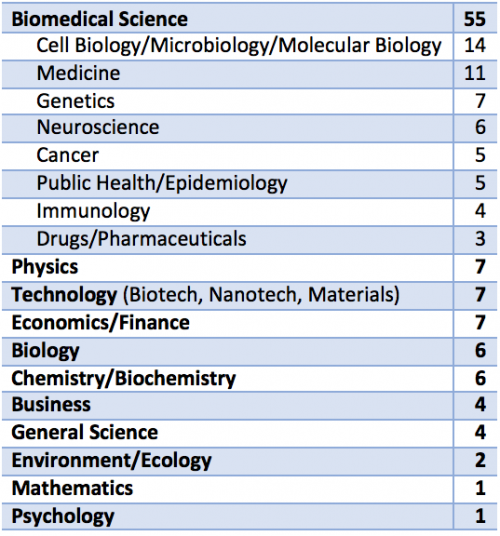 Apparently the quality of the research in mathematics just isn’t very good, using his reasoning.

Another problem is that a system that ranks journals by their ‘significance’, that is, how frequently cited they are by related journals, is going to be sensitive to numbers of participants within a discipline, so this metric is also going to be strongly skewed; popular disciplines will have more popular journals, regardless of their relative quality. So just to give you an idea of the numbers of people working within these general fields:

Number of scientists and engineers in the US: 6.2 million.

Number of sociologists in the US: less than 3,000, which does seem awfully low; same source says the number of biochemists, just biochemists, is about 34,000.

So it is totally unsurprising that fewer social sciences journals are listed among the top 100 journals — there are fewer social scientists. It’s also meaningless to compare a broad category of “biomedical journals” with a sub-sub-discipline like “gender studies journals”. Everything about this is bad logic.

But then, it’s also unsurprising given the source. This is coming from the American Council on Science and Health, which is a reactionary pro-industry think-tank of dubious value.

A consumer group is an organization which advocates the interests of unrepresented consumers and must either maintain its own intellectual independence or be directly accountable to its membership. In contrast, ACSH is a consumer front organization for its business backers. It has seized the language and style of the existing consumer organizations, but its real purpose, you might say, is to glove the hand that feeds it.

Numerous ACSH publications (that do not disclose the corporations that have funded the organization) take positions attacking public concerns about various corporate products and practices, such as genetically modified foods (GMOs), pesticides, herbicides, and more, and have sought to downplay concerns raised by scientists and consumers. However, the tobacco industry has never been an ACSH client, and Whelan has very cleverly used her anti-tobacco stance to gain some credibility among health professionals and some activist groups. All of the tobacco connections were conducted by her partner, Fred Stare.

Some of the products ACSH has defended over the years include DDT, asbestos, and Agent Orange, as well as common pesticides. ACSH has often called environmentalists and consumer actvists “terrorists,” arguing that their criticisms and concerns about potential health and environmental risks are threats to society.[2]

ACSH has been funded by big agri-businesses and trade groups like Kellogg, General Mills, Pepsico, and the American Beverage Association, among others.

It’s also a front for the Koch brothers.

I’m not going to reject a scholarly discipline because some conservative shill found a way to tag it with a small number; I’d have to admit that zebrafish developmental biology must be of lower quality because there are fewer publications on that specific subject than in, say, geology, which is such obvious nonsense the author should have noticed. But I am happy to follow the money to dismiss a source because it is funded entirely by industries that are trying to protect their bottom line with fake science that undermines honest work.

The schedule for Convergence is now available » « Tear ’em all down