Mano Singham covered New Zealand’s election today and Jacinda Adhern’s landslide victory.  Notable in the victory is New Zealand’s mixed-member proportional (MMP) voting system.  It’s fascinating because it negates the bias of “first past the post”, guaranteeing seats to parties which gain large numbers of votes even if none of their candidates win.  And just as importantly, it’s simple.

At voter has a simple two column paper ballot which is marked with a pencil.  They have two choices: one vote for a party, and one vote for a candidate.  Most people will vote for the same party as the candidate, but they do not have to. 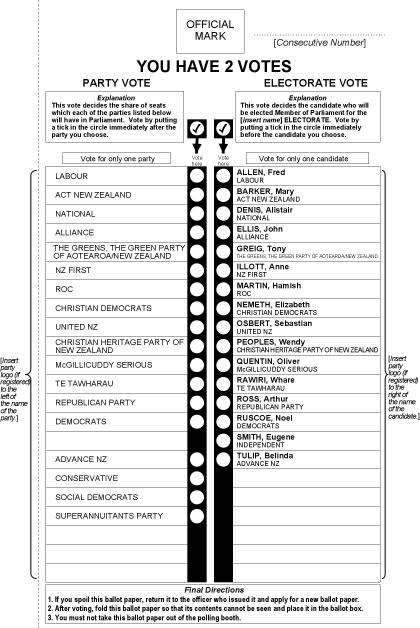 In 2015 Dustbin Trudeau promised electoral reform but backtracked, and is even more reluctant after the 2019 election in which his liberal party “won” seats far in excess of the voting percentage.  This has only increased public demand for electoral reform.

Politicians only want to offer convoluted systems that the public can’t understand (e.g. vote distribution) because when people don’t understand change is better, they stick with the status quo.  If I had any say, I would offer a simple “first and second choice” points system.  It’s not a distibuted vote system like New Zealand’s, but it would be better than the current system.

My idea is each voter can make a first choice and second choice.  First chooses the candidate they prefer, then the option (not a requirement) to make a second choice, which must be a different candidate or none at all.  (If you choose the same for first and second, it is a spoiled ballot.)  Candidates would be awarded points: three point for each first choice, one point for each second.  The candidate with the most points wins the riding.  In the event of a tie, most first votes wins (granted, another tie breaker might be required).

* two ballots had no second choice