A creepy antisemite killed some people the other day, in the usual way. It was at a synagogue during a religious occasion. According to tumblr user prismatic-bell:

“You know, the news is really sheltering gentiles from the full horror of what happened this morning when they keep using the phrase “Brit Milah.” Yes, that’s what was happening in the synagogue this morning, but do you know what it is?

Every bit as important as a christening or first birthday.

That is what this shooter opened fire on. A baby naming with people praying for that baby’s health and happiness and future.” 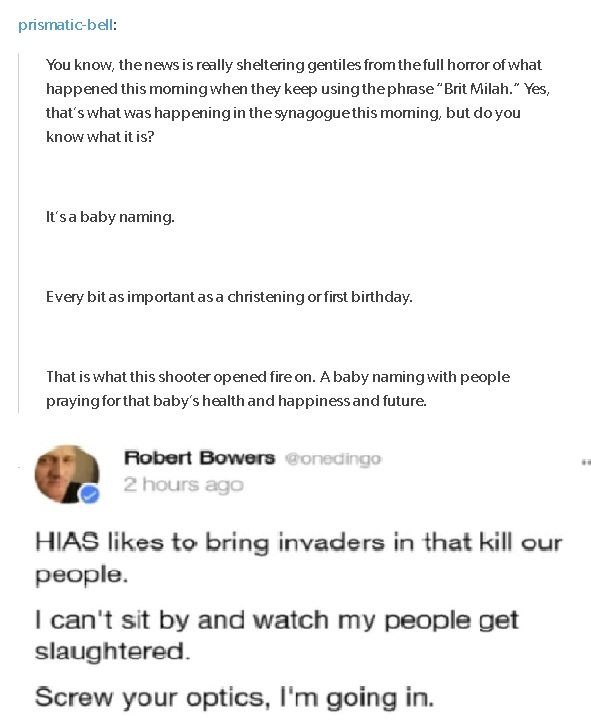 And what did Robert Bowers, the mass murderer have to say about the baby-blessing business?

“HIAS likes to bring invaders in that kill our people.

I can’t sit by and watch my people get slaughtered.

Screw your optics, I’m going in.”

There’s a little bit of unexplained lingo in the terrorist’s tweet (or was it a “gab”?)  HIAS is an organization that helps immigrants, originally dedicated to helping jewish people escape pogroms and the like, now helping refugees more broadly. Nazi conspiracies have it that all those immigrants from south of the border are hot to kill the white man and take his women.

To the terrorist, those baby blessers were inhuman wizards, summoning an army of orcs to take out the magical people of light. Where is the evidence that refugees kill people? Recently Faux News helped Cheeto Hitler through a rough week by hyping a story about a young lady murdered by a shitty boyfriend who happened to be an immigrant.

No haps from them that week about how often white men – especially veterans god bless the troops – murder the ladies in their lives.  It paints a picture for people like our nazi terrorist du jour, this lopsided reportage, in combination with less accountable news sources on facebook publishing flat-out lies.

Anti-semitism is baked into Western civilization, like, oh, say, blood in a loaf of bread. As something of a cultural outsider – a neglected destitute child of two mentally ill black sheep – I missed the memo that I’m supposed to hate jewish people. But because of these centuries of persecution, wild folklore, pogroms, general shittiness in christendom, it’s really easy for many culturally christian people to buy these murderous lies about jewish ethnic groups.

I suspect the people in our fuhrer’s clique that are capable of being semi-thoughtful would really rather not have anti-semites be their main supporters. To them, it’s about oppressing negroes, which is much more politically safe in the United Snakes.  But they can’t hit one target without causing splash damage to jewish people. They try to stoke anti-latin prejudice and nazis figure out a way to blame it on “The Jews.”

But leaving aside the reason he believed jewish people were murdering whitey, he seemed quite convinced of it.  And if you care about a group of people who are being murdered, wouldn’t you want to go to bat for them?  I see jewish people actually being murdered, and could come back with a very similar train of thought to this creep:

“Nazis like to kill innocent people.  I can’t sit by and watch my fellow humans being slaughtered.  Fuck trying to look socially acceptable, fuck my personal safety, I’m gonna whack those fools.”