What Salty Current said on Alex Gabriel’s “smoke / fire” post from last month, a post which was kicked back to life a few days ago by the odious “sonofrojblake,” whom I finally banned from commenting here because he’s so odious.

@Salty Current (#59): Including trans women in your definition of women doesn’t require you to ‘accept unproblematically a gender binary with whatever associated qualities anyone might attach to it’.

If you’ve been experiencing the oppressive aspects of the category “woman” and its associated beliefs for your entire life, writing for years prior questioning and challenging the category and its definitions, and (in Ophelia’s case) feeling very ambivalent about what it means to identify yourself in those categorical terms, it does. I’m really very angry about what looks like a total dismissal of our very real interest, as people harmed by these categories, in continuing to question and challenge them – in continuing to want to talk about gender in a critical way; like not immediately ceasing that aspect of our fight against oppression because some people demand it is done to exclude trans people from the great benefits of womanhood. People’s refusing to acknowledge the difference between this continued questioning and challenging of gender categories, in form and substance, and denying people’s rights, including the rights to self-identify and to have that identification be recognized and respected, is troubling. There is a difference between saying “I accept these categories and belong to one, and I won’t allow those people into it” and “I recognize and respect everyone’s self-identification and rights, but I want to continue to challenge the received categories which I and others have experienced as oppressive,” and it’s essential that it be recognized. END_OF_DOCUMENT_TOKEN_TO_BE_REPLACED

Jesus and Mo explain about blasphemy. 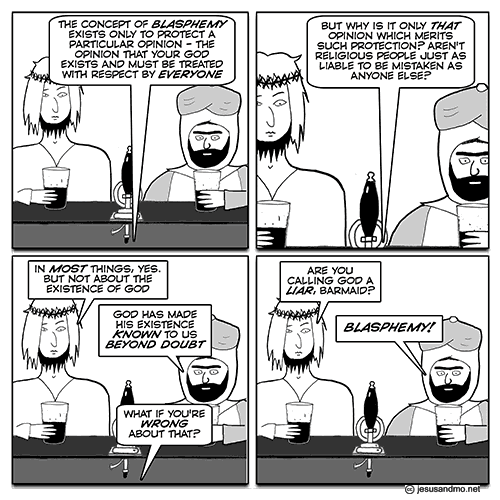 You can support J and M via Patreon.

The Duggars are asking for money.

On the conservative clan’s official YouTube page, Duggar Studios, the family asks for supporters to contribute funds so the kids can create “fresh quality content” on their video site.

“Every contribution is helpful, big or small,” they claim.

However, the videos, featuring the children playing basketball and going to the dentist, don’t seem to require much of a budget.

Also, clips are only uploaded to the account once every few months.

The former reality stars have a history of money grubbing.

Daughter Jill, 23, and husband Deryck Dillard, 26, recently faced criticism when they asked fans for financial donations for their first long-term mission trip— but refused to divulge details on how the money would be spent.

The money would be spent FOR GOD, obviously.

Another good comment by John Horstman on how we think about gender, this time on Heina’s post distancing herself from me.

The fact that cis women are women is not disputed by anyone, not trans women nor non-binary trans folk nor men nor trans men. Even on the very fringes of radical non-cis thought, spaces where I often find myself, I’ve yet to see anyone questioning the legitimacy of cis women’s status as women. On the other hand, some people, including some women, think that trans women’s status as women is up for debate.

This is simply incorrect. There is a massive amount of scholarship questioning the validity of gendering organizational schemata at all, for cis, trans, genderqueer, and any other sort of people. END_OF_DOCUMENT_TOKEN_TO_BE_REPLACED

One from last Saturday, that I missed because there’s a lot. I’m missing most of it, I promise you. I hear reports, but I don’t see most of it.

It’s on Melby’s blog. Melby is one of the worst. The post is by H J Hornbeck. It starts on a friendly note, to soften you up.

It was about a year ago, I think, that I walked up to Ophelia Benson and said she was my favorite blogger on FtB. I adore her writing style, which feels like a conversation between old friends, and her frequent posts on international news were a breath of fresh air.

Even as those words were escaping my lips, though, I could see clouds on the horizon. I got burned by a TERF comic she once posted, which led me to do some research into Trans-Exclusionary Radical Feminism. The glib summary is “lesbians freaking out over potential penis,” which is surprisingly accurate.

Bam! the trap snaps shut on your paw.

It wasn’t a “TERF comic.” It was a comic done by someone who is (I’m told, and I take their word for it, which judging by the last few weeks may be a mistake) a TERF. Not a TERF comic but a comic posted by a TERF. In other words I did not knowingly post a TERF comic – the content wasn’t about trans issues.

So right at the outset he’s poisoned the well – he’s been dishonest. I did not post a TERF comic.

More worrying to me was what Benson didn’t do: learn from the situation. I saw no evidence she took a step back and reconsidered, on the contrary she went stony silent and refused to be pigeonholed. I brushed this off, but pinned a mental note in case it happened again.

END_OF_DOCUMENT_TOKEN_TO_BE_REPLACED

M.A. Melby: Thanks. I see that now and I recall it in the thread on the drag performers being banned from the Glasgow Pride.

It didn’t sit well with me then but the response has been disproportionate and unhelpful. I like the description “clusterfuck” and I’m going to stick with it.

Demanding that Ophelia answer a question that she sees more nuanced than others, castigating and slandering her on other blogs and social media, and encouraging other bloggers and commenters to join in is pathetic. All of these acts are typical of why I could never feel quite comfortable on FtB. This sort of bullshit happens all the time. Pharyngula is the worst, of course, but it looks like PZ has put an end to the social threads and those folks are making plans to start their own thread of clusterfuck elsewhere.

And to what end? Has the world been made safer and more welcoming for trans people by this clusterfuck? I submit that the threat to the life and happiness of trans people isn’t feminists having nuanced discussions on what gender means. The sort of people that would hurt, isolate, and condemn trans people aren’t asking themselves: “What does ‘being a woman/man’ even mean? Is it constructed or innate? If it’s innate what aspects are and which are social? What affect does race, class or sexual orientation have on constructions of gender?” That was not the internal dialogue of Michelle Duggar as she recorded a message that warned parents that men would dress as women to get into public restrooms and rape their daughters. That is not the internal dialogue of a man beating a trans sex worker to death because he just got sucked off by a “she-male” and what if his friends find out and call him gay.

I’ll tell you what the end has been: a whole lot of clusterfucking and no improvement in the understanding of gender or the lives of trans people, with a side of fetishizing the continued, disproportionate victimization of trans people.

This is what it’s like being me and having blog colleagues right now:

There’s Heina’s nasty, insinuating, having it both ways post about me yesterday. It had 98 likes on Facebook last time I looked.

I haven’t kept up with every specific thing that has gone on with regard to the recent particular matter of my colleague Ophelia Benson. I don’t want to misspeak or misstep; furthermore, others on every side of this have direct evidence of what was said and done by the many involved, whereas I do not.

To make my own stance on the matter at hand clear:

END_OF_DOCUMENT_TOKEN_TO_BE_REPLACED

A snapshot from the Freethought blogs page on Facebook right now:

Originally a comment by John Horstman on We’re not trying to draw bright line boundaries at all.

I identify as gender indifferent (as a subset of genderqueer) for exactly the reasons outlined in the post, and in my experience – both personally and academically – I’ve come to realize that a LOT of supposedly-cisgendered people are actually more like me, what I would call gender indifferent. And when I say “indifferent”, I mean insofar as it relates to identity; much like AJ Milne, I’m outright hostile to the concept and normative construction of gender at certain times/in certain contexts.

I should also note that trans people fall into the same two categories, though the overwhelming majority of people who decide to transition fall into the first group. The likely reason is that given the social – and often financial – cost of transitioning, someone who doesn’t care much one way or the other will find it easiest to go with the normative default (at least in terms of name/pronouns, legal identification, social identity category, etc.), even if the normative gender category overall doesn’t really fit that well either. Kate Bornstein is perhaps one of the better-known trans people who falls into the second category (she’s addressed this directly in several books and in the lecture she gave at my university, and quite possibly others), and she is frequently assailed with the same charges of (internalized) transphobia from a small, vocal contingent of gender-essentialist trans activists as a result. Someone like RuPaul may also qualify – the question of whether drag performers qualify as trans, perhaps contextually when in their drag personae, runs headlong into this very issue (in my experience, gender-essentialist trans people usually do not consider the drag personae of drag performers “legitimate” in the same way as their own gender identities – the Glasgow Free Pride ban on drag performers is an excellent recent example). END_OF_DOCUMENT_TOKEN_TO_BE_REPLACED

The second thing I see after logging on. 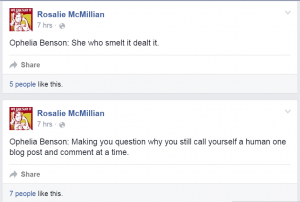 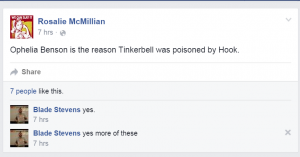 Ophelia Benson: Making you question why you still call yourself a human one blog post and comment at a time.

Ophelia Benson: She who smelt it dealt it.

Ophelia Benson is the reason Tinkerbell was poisoned by Hook.

Blade Stevens: yes more of these

Ophelia Benson: There will never be enough Zoloft to make me less sad that she exists.

I’ve never heard of this person.

My life has become so random.