An AME church burned to the ground last night in Greeleyville, South Carolina. It was burned down once before, twenty years ago. An anonymous fed told reporters the preliminary indications are not arson.

The predominantly African American congregation is more than 100 years old. Their church building had previously been burned to the ground in June 1995, almost exactly 20 years before Tuesday’s blaze.

Two young white men with ties to the Ku Klux Klan were arrested in connection with the fire, according to documents from House Judiciary Committee hearings held in 1996. The men were members of the KKK during the time of the burnings, but since renounced their membership, their lawyer said.

Arrested but not tried or convicted? The Post doesn’t say. END_OF_DOCUMENT_TOKEN_TO_BE_REPLACED

Phil Plait says ALL the things.

He starts with Tim Hunt’s day out.

He thought at first it was a very bad joke, but found there’s more to it than that.

Many science journalists were at the lunch and witnessed the whole thing, including Deborah Blum, Ivan Oransky, Charles Seife, and Connie St. Louis. After discussing what they saw and heard, they decided St. Louis should write an article about it on her blog at Scientific American. What’s very important to note here is that both Blumand Oransky have corroborated St. Louis’s report, multiple times. Seife did as well. Blum asked Hunt about his comments, and he confirmed that he thought women were too emotional to work with men in labs. END_OF_DOCUMENT_TOKEN_TO_BE_REPLACED 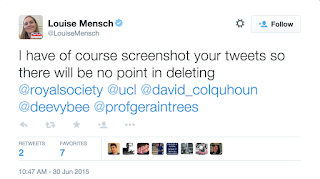