People said the impersonator is imitating my style, but no – this doesn’t sound like me at all:

I don’t think I tell people to “ponder” things.

I wouldn’t say “in what capacity” are you Xian because that’s meaningless.

I would never say “believing in christ.”

I would never say “Others would proclaim.”

I would never, ever belittle someone by calling her “miss.” Yuck.

I don’t use a hyphen, I say trans woman, because I understand it’s the preferred way of saying that.

I would never say “may meet the requirements set by certain people” – that’s ugly and clumsy and gross, and I don’t write like that.

I wouldn’t say the substantive part the troll ends with.

Few days ago, I came across an article being shared by Atheist Republic, discussing how they are under attack after publishing the Rainbow Kaaba. I got interested and read the whole article where the author described how their Facebook page, their Admins are getting abuse from Islamists, threats and how their Facebook accounts are getting suspended for no good reason.

To my surprise, I wasn’t surprised, at all!

Because, we, the Bangladeshi bloggers, have suffered this kind of attack all too often. This kind of mindless attack, which I call Facebook terrorism, was thrown at us since the dawn of blogging history. But until now, I used to think attacks such as this were only limited to Bengali speaking blog-sphere. We are the most attacked blog community, and have to deal with the worst kind of Islamic infestation. four of our bloggers / authors were killed earlier this year due to Atheistic / Science blogging / writing. END_OF_DOCUMENT_TOKEN_TO_BE_REPLACED

Meet the owlet who is my new avatar.

One more fun thing before the sun sets over the mountains – 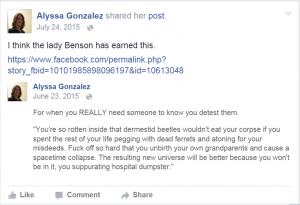 I think the lady Benson has earned this.

For when you REALLY need someone to know you detest them.

Originally two comments by Julia S on The destroyer of worlds.

I also saw a comment under your name in a blogpost. I was a bit surprised as it was blatantly anti-trans but it seemed reasonable (as in, calm and non-slurry) and used similar language as you so I wasn’t incredulous about its authenticity. I was thinking about writing about or replying to it but decided against it. It’s uncool for someone to impersonate you, if that’s true and you didn’t just change your mind about a distasteful comment. Good wishes, Ophelia.

[I replied: Could you tell me where, please, so that I can do something about it?]

I would tell you if you weren’t such a transphobe (based on what you’ve said here, on this very blog).

I have developed superpowers.

I’m not friends with this person and have had zero interactions with her recently – I would estimate at least a year.

#tookmymeds + beta-blockers and double melatonin-> some hope of a) not bursting a vessle and b) sleep. Thanks a fucking heap, Ophelia Benson.

END_OF_DOCUMENT_TOKEN_TO_BE_REPLACED

Someone is impersonating me to leave terrible transphobic comments on blogs.

If you have a blog and you get a comment from “opheliabenson@freethoughtblogs.com” that’s not from me, it’s an impersonator. 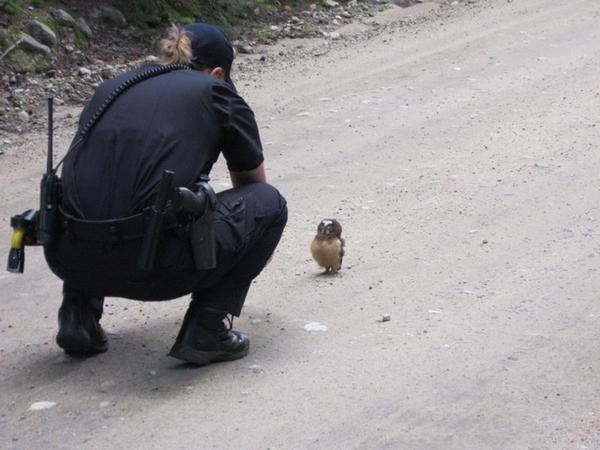 END_OF_DOCUMENT_TOKEN_TO_BE_REPLACED

Ok. It’s too late for this (but then it probably always was), because there are a lot of people just hell-bent on spotting a TERF in the bushes and not changing their view no matter what; the well is thoroughly poisoned and is going to stay that way. The poisoner oolon, who went to Pharyngula to work up the troops against me yesterday, is one such; that dude wants scalps, period.

But there are, I’m told, people who are just plain hurt and upset, especially trans people, and I don’t want to hurt people. Therefore I’ll try to clarify what I meant by refusing to answer yes or no.

There’s a difference, for instance, between an ontological is and a political is.

The more I think about the ontology of gender, the less I think I understand it. It’s slippery. That makes it impossible to answer yes/no questions about it.

But politically? Do you mean, will I take trans people’s word for it? Will I use their right names and pronouns? Of course I will. Do I want to make them jump through hoops to prove something to me? Of course not.

Do I get that trans people are severely marginalized, and have to jump through kinds of hoops I have no idea of? Hell yes.

I have thoughts and questions about gender, broadly speaking; gender as it affects all of us, and women in particular. I don’t think those thoughts are transphobic.

Jenora Feuer’s new guest post on the subject is illuminating, I think. Read it in tandem with this.

Originally a comment by Jenora Feuer on We’re going to end up putting feminist intellectual history through its own extinction event.

I can’t comprehend what it means to “know that you are male/female,” because I don’t particularly “feel” my gender.

There was a comment at We Hunted the Mammoth a few weeks back (I commented on it here before) where someone said that they had found two different groups of people who really didn’t ‘get’ trans issues intuitively. One was the group of people who strongly identified with their gender, assumed everybody else was like that, and therefore that anybody who didn’t identify with their gender was wrong in some way. The other was the group of people who don’t strongly identify with any gender at all, and don’t really understand what it’s like to have a strong identity, particularly one that doesn’t match your physical body. Both of these groups have the same apparent problem on the outside, but completely different ways of getting there, and need different approaches. Especially since the first group is often personally invested in the concept of a gender binary, while the second group will consider the binary to be a default assumption if they haven’t thought about it, but they don’t really care about it to the same extent.

I get the impression most of the original TERF types were in the first group, or at least certainly acting like it: they were being explicit gatekeepers to the concept of ‘being a woman’, drawing boundaries, and in general acting like a mirror image of the problem they were ostensibly fighting against. But a lot of the people here I’ve seen here (including myself) are in the second group; we may make mistakes, but we’re not trying to draw bright line boundaries at all and don’t really intuitively grasp why other people are. Which often puts us on the wrong side of a lot of different lines that other people DO insist on, just because we don’t necessarily see them.