With the recent surge in transphobic bigotry, there’s been an increase in (attempted) support for trans people as well. The problem is that a lot of this “support” is actually perpetuating transphobia.

First example will have no links, because it involves a young transgender girl and I’m not going to shine a spotlight on her Facebook for the hate shitstorm she’s already dealing with. Let’s call her Jane. Jane’s mom posts a photo of her young daughter in the style of a magazine cover–edited to all hell, airbrushed, enviable eyeliner and make-up to the nines. She’s even sporting a fantastic resting bitch face to match. She’s wearing a sort of country girl outfit, blue denim jeans and a stark white tank top. Her hair is long, half way down her back, curly and wavy like a shampoo model. All in all it’s a picture that screams high femme, unattainable without digital assistance as are most beauty standards.

Then the mom posts a caption along asking if it would be okay for you to send someone who looked like that into the men’s room.

The implication being that you should be comfortable sending your daughter in the men’s room if she doesn’t look like that.

Sorry, Jane’s mom, I know you want to support your kid, but that’s kind of a shitty way to do it. Particularly since you’re teaching Jane that anyone who doesn’t look as femme as her should be thrown under the bus in this pointless bathroom witch hunt.

But this morning, I actually thought about transgender men and women and the use of restrooms. Now people have made their opinions very clear and are not the least bit shy about sharing them. Many simply are not okay with transgenders using the restrooms of the gender they identify with.

To this author’s credit, he responded well to someone in the comments pointing out his error. It’s still there in the post, which means he probably just missed this particular instance. Point is, this is still a stigmatizing way of trying to describe trans folk. You use the word “trans” in all the same way you use the word “short.” Short women are still women, after all, yet you would not call them “shorts.” 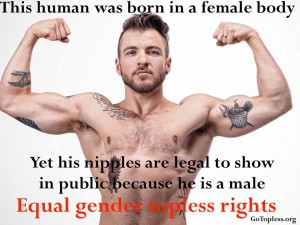 Can ya fuckin’ not? 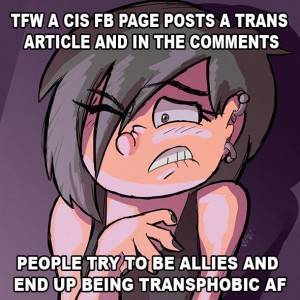 My aesthetic as well as my expression in one cartoon.

Our very own PZ Myers actually changed the way I started to understand human sex determination with his coverage of a Nature article. Short version: The concept of “biological sex” is a bit of a moving target which encompasses a lot of parts, and the more determined you are to ram that complexity through a binary, the more people are excluded from your definition of male and female, despite having all the visible taxonomy that inspires people to believe human sex determination is an on/off switch.

What you mean to say is that a doctor looked at our genitals as freshly born babies and made an educated guess that we would grow up to be wo/men. The cool kids call this “assigned fe/male at birth.” This describes trans realities without minimizing them–someone else told us we were a boy or a girl who would grow up to be a man or a woman, and they happened to be mistaken, as is bound to happen eventually with guesswork. And make no mistake–it is guesswork, because children aren’t typically karyotyped and dissected to figure out whether there are any sex developments different from the most common correlations.

If this is the kind of help you’re going to offer, I’d rather you not.