International Women’s Day is celebrated on the 8th of March every year around the world. According to Wikipedia, “It is a focal point in the movement for women’s rights.” So far so good, I totally support attempts to eliminate patriarchy, sexism, and misogyny. Of course, we need more gender equality and rights for women.

Nonetheless, I have absolutely zero enthusiasm about the 8th March celebration. This date is a big deal in former USSR countries. It was a big deal in the USSR, and the tradition continues. In Latvia, 8th March is a day when men are expected to give flowers to all their female acquaintances, work colleagues, friends, and family members. For their wives and girlfriends they are encouraged to give larger and more expensive gifts like chocolate candies, perfume, jewelry, SPA visits, gift certificates for beauty salons, restaurant meals, etc.

Basically, this is a day when half of the population has to give gifts to the other half of the population. A day on which men congratulate women for, err, um, something. Having been born with a female body maybe? Why? So that men could then spend the next 364 days feeling less guilty about the fact that we still live in a misogynistic society? If you give women some flowers once per year, that’s supposed to somehow compensate for all the sexism they experience during the rest of the year? Yeah right.

Apparently, some people are trying to just celebrate womanhood on this day. Opposing patriarchy and misogyny would be a clear and admirable goal. It would make sense to set aside a special date for this. But how do you even try to celebrate womanhood? Apparently, you do this by having half of the population give flowers to the other half of the population. Yawn. I am not impressed.

I just looked at the news headlines for some Latvian online media: “A Guide for what Gifts Women Want,” “Threat Your Significant Other with a Breakfast in Bed,” etc. I have no doubt that many people enjoy breakfast in bed (I sure do), but if I had to cook all the family meals for 364 days each year, then a breakfast in bed once per year wouldn’t be what I want. Nor have I ever cared about being given flowers.

For years, for me 8th March simply meant a day on which male family members gave me flowers. I do perceive flowers as beautiful, and some of them also smell nice, but overall I think that flowers are a waste of money. In just a few days they turn into a waste disposal problem. Thus I never really liked being given flowers. I don’t like impractical gifts. Nowadays, I am just glad that after coming out as agender people have started to leave me alone on this date. Getting congratulated for having been born with a female body would feel weird given how I would have preferred to have a male body.

Of course, there are some women (and also men) who enjoy receiving flowers. If you personally know such a person, then giving them flowers every now and then is a good idea. But insisting that all women should be given flowers on some day only promotes harmful stereotypes. Instead it is better to ask your friends and family members what they actually like and whether they even want to celebrate some day.

Moreover, there’s an unfortunate correlation I have noticed: people, who adamantly insist upon celebrating 8th March and who believe that all men should give women flowers on this day, also tend to be in favor of traditional gender roles. They are the ones who act like sexists for the rest of the year. Celebrating 8th March by giving flowers to women is a tradition that actually serves to enforce mandatory gender roles upon people. It is an old tradition beloved by people who are sexist and have harmful ideas about how men and women ought to live differently. 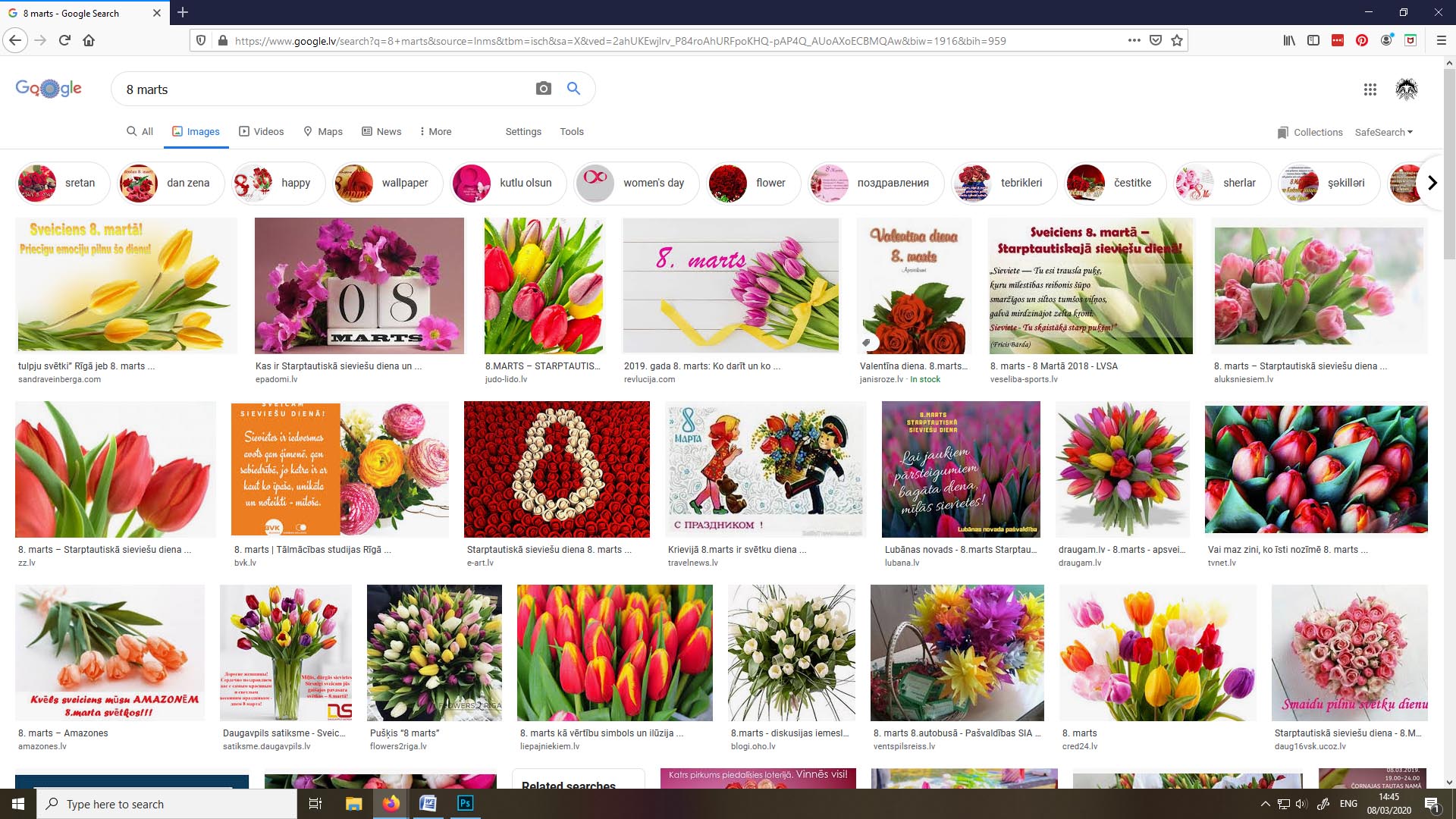 This is a screenshot of what results Latvian Google gives me when I search for “8th March” in Latvian language. I am seriously not impressed. 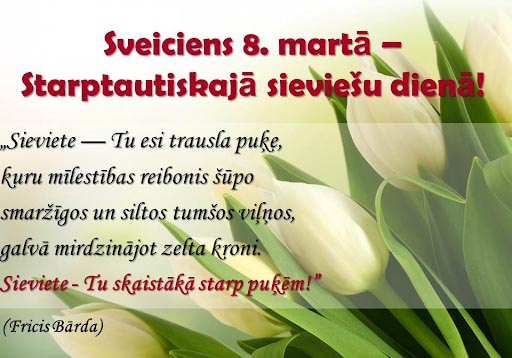 I especially hate this one. As you can notice, it was one of the first images Google gave me. Here is the translation from Latvian:

Woman—you are a fragile flower,
which is lulled by love
in fragrant and warm dark waves,
with a shining golden crown on your head.
Woman—you are the most beautiful among flowers!

The author of this poem, Fricis Bārda, is a well-known Latvian poet.

Here’s the problem—I hated being told that I am fragile (or that I am supposed to be fragile) long before I figured out that I am not cis. Sure, my unwillingness to imagine myself as fragile is certainly tied with my preference to live as a man, but come on, there are also plenty of women who neither feel fragile nor want to be fragile.

How the hell is such nonsense supposed to promote women’s rights and equality?

Oh well, on the bright side, in Latvia there are some organizations that use 8th March to campaign against domestic violence. At least some people get the point of this day, which was supposed to be about promoting equal rights for women and opposing all the various forms of abuse women experience on a daily basis.

Coronavirus Panic » « Parenthood Regrets: Parents Who Wish They Were Childfree