In a high stakes gambit to wreck the economy and thus ruin President Obama’s second term, the teaparty lost and America won — but they did manage to spike the Sandy Relief measure. On to the cliff averted! END_OF_DOCUMENT_TOKEN_TO_BE_REPLACED

8: 20 PM Central Update: If people hogged the mic like this in a workplace meeting you’d want them fired, immediately. They think about 10 PM 11 PM central still to final vote. Unrelated note, pretty sure Dreier (R-Douche) copped to climate change data, awfully convenient since he is leaving the House.

7:40 House back in session, bill called up for one hour of debate then there will be a vote. This mess could soon be over folks. It’s funny, even moving at breakneck emergency ramming speed the House talking heads can barely keep my attention during this debate.

Breaking Update 7:30 PM Central: Vote could begin early! It’s intresting enough that I’m glued to CSPAN now. It was mostly House repubs whining about the debt they created with tax cuts, two wars, and an utter and complete demonstration of the catastrophic result of deregulation on the financial products industry. But this is a death rattle, The bell just rang to bring them back and I think this will pass. EtV, estimated time of vote? Supposedly 9:00 – 9:30 PM but it could start any minute now. It takes 218 voites to pass, there are currently 242 republicans and 193 democrats in the House of Representatives. END_OF_DOCUMENT_TOKEN_TO_BE_REPLACED 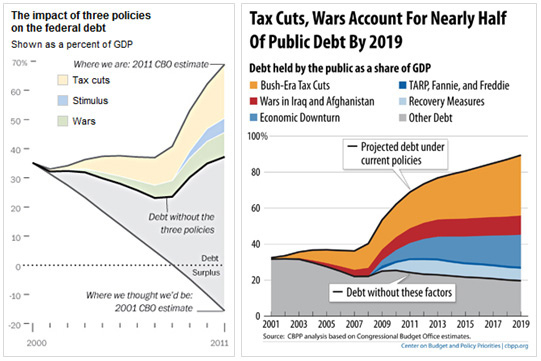 President Obama hit the Sunday talk show circuit this morning, finally, to heap pressure or blame on the GOP for jacking the nation. Just thinking how the Will of the People is being held up by one over pampered spoiled prick is enough to make me give up on our version of democracy: END_OF_DOCUMENT_TOKEN_TO_BE_REPLACED

Victory is ours! If nothing is done taxes go up on everyone at the first of next month, and everyone in DC will rush to cut taxes in January. The Senate will prevent any bill that includes tax cuts on the highest incomes from even reaching the President’s desk, so there’s no need to veto anything. Large majorities support raising taxes on taxable gross income over 250k, large majorities do not want Medicare benefits reduced in anyway, and a big nasty election was just won on both those ideas. So how could democrats in DC possibly fuck it up? END_OF_DOCUMENT_TOKEN_TO_BE_REPLACED

If no deal is reached and the US goes off the so-called fiscal cliff, one party better be wearing a bunji cord or a BASE rig. Because a new poll released today by Pew Research Center for the People & the Press and The Washington Post, conducted Nov. 28-Dec. 2, confirms Americans will blame conservatives: END_OF_DOCUMENT_TOKEN_TO_BE_REPLACED

Speaker John Boehner is not a stupid man. Which is why political junkies are wondering aloud what he was up to with a highly unpopular, rather crazy counter proposal to avoid the fiscal cliff coughed up by House Republicans today. How bad is it? It’s bad: END_OF_DOCUMENT_TOKEN_TO_BE_REPLACED 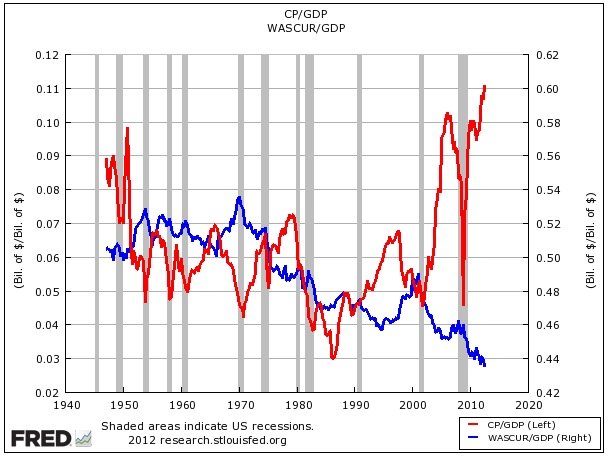 When the pampered Wall Street CEO class nuked the economy, shown by the red-colored needle shaped drop in corporate profits just before 2010, it was US wage earners who rode to their rescue, securing their multimillion dollar bonuses and cushy jobs. The same working middle class whose wages shown in blue never recovered. At first the CEO class strutted around and scolding us for taking on the debt to save them END_OF_DOCUMENT_TOKEN_TO_BE_REPLACED

Let’s say you’re a pampered CEO making millions, and you create the most toxic debt known to mankind, debt so poisonous it blows up and crashes the entire US economy, throwing millions of taxpayers like me into the snapping jaws of unemployment and misery. Then tax payers like me bail your rich ass out to the tune of a trillion bucks securing your multi-million dollar bonuses and luxurious retirement. How would you reward those taxpayers? If you’re a Wall Street investment banker, you scold us over the national debt and tell us we must sacrifice more: END_OF_DOCUMENT_TOKEN_TO_BE_REPLACED

It remains to be seen what kind of deal Obama will be able to wrestle out of the House this year or next, but in the meantime billionaire investor Warren Buffet paddles the spoiled rich with a vengeance in the NYT. Billmon follows up with up a salient point where upon the GOP toys with throwing their mildly affluent base under the bus in favor of Kochwhores. First an excerpt from Buffet’s op-ed, which I highly recommend should be read in its entirety, titled Stop Coddling the Super Rich: END_OF_DOCUMENT_TOKEN_TO_BE_REPLACED