Corporate America is stuck between a rock and a hard place. More accurately, between customer and service. Ultimately, any company that has a customer is in the customer service business. But few CEOs and other big wigs like to think of themselves that way. They like to think they’re developers or accountants or what have you. Besides, delivering service and supporting a complex product costs money, and cost is a four letter word. Solution? Hire temps! END_OF_DOCUMENT_TOKEN_TO_BE_REPLACED 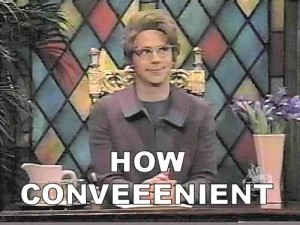 Pastor E. W. Jackson is running for the crucial job of Lt. Governor in Virginia. Can we dispense with which party he’s in? It’s a critical post in VA because that state’s senate is split and the Lt Gov casts the tie breaker. He’s quite a piece of work and exhibit A for why pulpits and ballot boxes mix like domestic bliss and anabolic steroids: END_OF_DOCUMENT_TOKEN_TO_BE_REPLACED

In most any civilized space-time that headline would be unassailable. Remove or reduce food, shelter, and medical care, and more people die. Some get so depressed by facing all of that, they choose the only way out they see. But we live in interesting times, where facts don’t count for a huge chunk of the purportedly most prosperous and best educated nation on earth. Expect the usual hand waving and cold-blooded denial from them.

For the rest of us, data linking depression and suicide with the sudden onset of homelessness, medical bankruptcy, or hopeless grinding poverty comes as no surprise at all. Austerity kills, it really is that simple and everyone knows it. In Greece, where Austerians have rammed through ledge penalizing the least affluent and most vulnerable for the greedy sins of the super rich, the healthcare system is collapsing along with what’s left of the economy. But in other places equally hard hit or worse, where the Austerians have been held at bay, the data shows exactly what you’d expect: END_OF_DOCUMENT_TOKEN_TO_BE_REPLACED

This was posted and marked as compiled from an Iraq War vet who was paralyzed in an ambush in Sadr City in 2004. He is now reportedly under end of life hospice care for complications from that wound. Regardless of his condition and prognosis, the points made are painfully dead on balls accurate. There are still dozens and dozens of imbeciles in Congress, Republicans and Democrats alike, who proudly voted to piss away trillions of dollars and countless lives on non-existent WMDs. Some have genuinely repented, but there are many who say they would vote to ‘liberate the people of Iraq’ again, some made the talk show circuit this weekend because it was the tenth anniversary of the worst, bloody foreign policy fuck up since Vietnam. Many of those same lying apologists suddenly get the vapors when anyone suggests spending a tiny sliver of that titanic sum helping ordinary Americans, including wounded vets and evicted former home owners, better endure the dire consequences of their many, many catastrophic policy blunders: END_OF_DOCUMENT_TOKEN_TO_BE_REPLACED 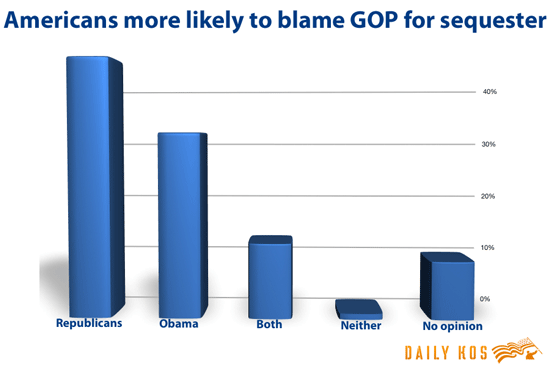 Once again we see the bizarre creature that was once a consistent political partyP cleave into the beast with two heads. One head talks to the base and their propaganda organs in a language it hopes only they understand, cheering on the sequester and the downfall of Big Evil Government (When dems hold the WHtm). The other head talks to the middle of the nation and the mainstream press, where it confesses the sequester will be terrible and it’s all Obama’s doing. And of course, like in so many other situations as of late, the public can plainly see both heads and hear them both talking and isn’t buying it. That 30% and change you see blaming Obama? That’s the almost exactly how many voters are part of the Teaparty base. A plurality blames the GOP, a smaller segment blame both sides, both of which are completely defensible positions in my view.

This kind of gives you an idea of the broad reach of what will happen if, at the end of next week, Congress isn’t able to cook up another deal to punt decision-making another month or year or whatever down the road: END_OF_DOCUMENT_TOKEN_TO_BE_REPLACED

Round up of President’s remarks: NYT; AP/Google; CBS News; NPR

TPM — “There are only two options to deal with the debt limit: Congress can pay its bills or it can fail to act and put the nation into default,” said Obama’s spokesman Jay Carney. “The President and the American people won’t tolerate Congressional Republicans holding the American economy hostage again simply so they can force disastrous cuts to Medicare and other programs the middle class depend on while protecting the wealthy.”

Final update, just in: Maybe the spectre of public shame in the midst of a PR campaign trying to sell us on what a great corporate citizen AIG really is made a difference, the board has declined to pursue a lawsuit against the US government bailout that saved them. Even the Wall Street journal had a hard time believing they would.

Update 1/9/2013 10 PM Central: I’ve already seen some anecdotal evidence that a faction of the dumbest mushroom conservatives are drawn inexorably to defend AIG — when informed of the basic facts they know intellectually it’s a bad idea to take AIG’s side, but they just can’t  seem help themselves, they keep getting pulled back to insanity, as long as the government is being sued and it involves the word bailout. If the AIG board is dumb enough to decide to try and sue us today, my spidey sense is screaming this could blow up into a great wedge issue.

Hell hath no fury like a company that is too big to fail and American International Group, the largest insurance company in the world, is proving it by considering a suit against We the People for saving their worthless ass. Let’s be clear: AIG wasn’t merely a victim of the 2008 meltdown, its financial products division was the primary architect of the derivatives and virtual exchange that caused the collapse. After destroying the world economy and throwing millions of lives into chaos, the board is now considering a $25 billion suit against the US government that saved it: END_OF_DOCUMENT_TOKEN_TO_BE_REPLACED

Now that the cliff has been breached, conservative grifters are back scheming how best to serve their rabid, dwindling base without losing everyone to the left of Mussolini. First up, vulnerable Senators will have to pretend they have serious reservations about fellow Republican Chuck Hagel to serve a stint as SecDef, simply because he was picked for the job by the much hated Kenyan usurper in chief: END_OF_DOCUMENT_TOKEN_TO_BE_REPLACED

Via Rightwing Watch its prosperity Gospel at its most revolting. Bryan Fischer denounces the fiscal curb deal, “It’s demonic!”. See, when Jesus preached about helping the sick and the poor, and that rich people were on cosmic probation for being rich, what he really meant was rendering 35% onto Caesar is so fine it’s divine, but paying an additional 4.6% on adjusted gross income over $450,000 a year is the work of Satan. It’s all in the Bible …