If you troll through the video game forums like I do, you find players saying they are having terrible lag, screen display issues, and other latency and graphics problems with Diablo III. Some of these are unavoidable: artifacts of millions of poeple trying to play the game at the same time. But there are some things you can improve. Below are some game-settings tips straight from some pro level video gamer friends of mine. 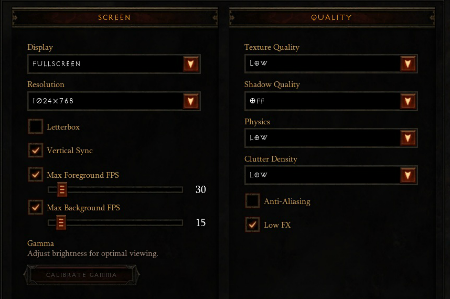 So here we have two screen shots of Diablo III settings on a super bad-ass gaming PC. These options can be found by clicking on the options tab in the start screen.  The one above with the low settings we’ll call LOW. The one below with the high settings we’ll call HI. LOW is where you should put your settings to experiment around when you are having performance issues. 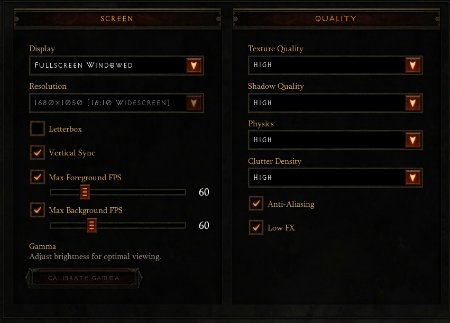 The most important initial settings to trouble shoot performance issues are vertical sync, anti-aliasing, and screen resolution. The vertical sync box should always be checked, other wise you could burn your video card into a molten pile of doped glass. Anti-aliasing filters the signal and helps smooth out edges, it takes away the jagged stair-step effect present in earlier generations of games and graphics, but it comes at a significant processing price. Initially this should alway be off/unchecked. Screen resolution should be obvious, this should always be initially set to windowed and to low numbers.

After vertical sync, anti-aliasing, and resolution, we get to the big Cahuna, FPS, which stands for frame rate per second. You can watch your FPS in the top left corner of the game by hitting the CTRL key and they “R” key. There’s a lot of misconception about FPS and what it means, especially when it comes to Diabo III.

If this PC is so bad ass, why don’t we have FPS foreground and background turned all the way up in HI? For starters the visual acuity of the human eye is about 30 to 60 FPS, there’s no point in it being higher than that — unless you are a pro video game player training or competing in a tournament. Second, in Diablo III FPS doesn’t work like it does in most other games. It’s more like a thermostat, setting your FPS high tells your video card how hot it can run. So with mid level or low level video cards, turning FPS down can, in some cases, actually increase your performance.

If you have a decent video card, up to date drivers on all your hardware, and are still having latency and stuttering, playing with these settings, starting at the lowest as shown in LOW, is a good way to optimize your performance and learn about your own PC. Tweak each one up and down and in combination, and you may be surprised how much your quality of play increases and how much faster you can progress!

Last, but certainly not least, a newish trend in video games is the use of physics to produce realistic effects. There may come a time when physics is even used to make clothing or hair behave like it does in the real world. But physics can’t be turned down; bits of bloody monster or exploding debris either follow ballistic arcs defined by the Laws of Motion or they do not.  That’s actually a big, big topic, so I hope to have more on it in the near future.

Let the heckling begin » « Meanwhile, back at the League of Doom