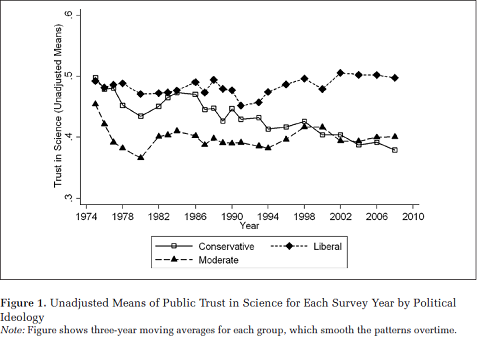 A new study links the rejection of science with political party, and the correlation that turned up should surprise no one. Chris Mooney writing at DeSmogBlog looks at the results:

(DSB) — Gauchat further validates the argument of The Republican War on Science by showing that the decline in trust in science was not linear. It occurred in association with two key “cultural break” points that, I argue in the book, heightened right wing science politicization: The election of Ronald Reagan, and then the election of George W. Bush. .. Gauchat also captures, once again, the “smart idiot” effect: Conservatives becoming more factually wrong—or, in this case, more distrusting of science, which to me is basically the same thing—as their level of education advances.

The first part is nothing new, but that second graf is something there hasn’t been a lot of discussion about.

The data, and Mooney’s own work in his new book The Republican Brain, suggests that conservative rejection of science grows more resolute the more educated they are! It’s as if those with far right leanings utilize the greater scientific awareness and improved critical thinking skills education ostensibly provides to more effectively dismiss reality and/or encourage their fellow conservatives to follow suit.

What might explain that? It makes sense that there could be both a cultural and physiological basis. Humans are capable of believing bizarre things, this entire blog network was founded to combat the most pervasive of those irrational beliefs, religion. The fact is our brains are not lie detectors, they are survival engines, selected and crafted by evolution by factors having nothing to do with our opinion on the scientific consensus on evolutionary biology or climate change. Take that ancient, plastic brain and run it through a cultural wringer, and you just might end up with a subculture where rejecting science is a sort of rite of initiation, a mental lodge sign, flashed between people to signify membership in a de facto tribe. And that really depresses the shit out me.

The crazy drama going on back in the USSR and why we are paying for it » « Are the Koch Brothers the real anti-Christ?