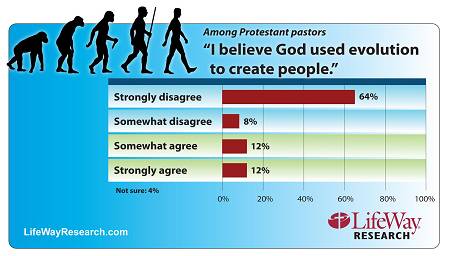 It is not pretty. According to a poll of pastors released a few days ago, the vast majority of them question evolution and then some:

(BaptistPress) — Pastors overwhelmingly believe that God did not use evolution to create humans and think Adam and Eve were literal people, according to a survey by LifeWay Research. The survey of 1,000 American Protestant pastors, released Jan. 9, also found that ministers are almost evenly split on whether the earth is thousands of years old.

I imagine the numbers for Catholics would be considerably better, I hope anyway, where better is defined as closer to reality. But it’s still mind-boggling: the men — and I guess a few women — who hold the trust of entire congregations overwhelmingly think evolution is false and many think the earth and presumably the universe are only a few thousand years old. Scary and sobering indeed.