John Oliver gives a masterful expose of why the deal that has been proposed is such a bad one but will likely get approved. Basically the deal is such that the Sacklers, while pretending to pay billions, will actually get off very lightly by having their considerable personal assets mostly protected and will also be given sweeping blanket immunity from the lawsuits of those who did not agree to be part of this deal and even future lawsuits. They will not even have to plead guilty to any personal wrongdoing in the case, blaming it all on the company even though they were very hands-on in driving the practices that led to massive rates of addiction.

The bankruptcy judge hearing the case has a history of being sympathetic to these kinds of deals which is why the Sacklers shopped around so that they could appear before him in the small town of White Plains, NY. This case shows how the rich can manipulate the legal system to their benefit.

I hope that this show helps to create a big enough uproar that he has second thoughts about letting them get off so easy.

The governor of New York has resigned following an avalanche of criticism from all sides after a damning investigative report was released by the attorney general of the state of New York Letitia James that he was a serial abuser of women.

I have to admit that I was surprised by the resignation. Cuomo has the reputation of being a ruthless bare-knuckle political infighter and I expected him to put pressure on state legislators to not remove him by impeachment. I can only surmise that he has found that he does not have enough support among them to win that fight or that more revelations are on the way of even more serious allegations.

The new report by the Intergovernmental Panel on Climate Change (IPCC) lays out the basis for “the most up-to-date physical understanding of the climate system and climate change, bringing together the latest advances in climate science, and combining multiple lines of evidence from paleoclimate, observations, process understanding, and global and regional climate simulations.”

The warnings are getting more and more dire, though the situation is not yet hopeless.

Earth is getting so hot that temperatures in about a decade will probably blow past a level of warming that world leaders have sought to prevent, according to a report released Monday that the United Nations called a “code red for humanity.”

But scientists also eased back a bit on the likelihood of the absolute worst climate catastrophes.

The authoritative Intergovernmental Panel on Climate Change (IPCC) report, which calls climate change clearly human-caused and “unequivocal” and “an established fact,” makes more precise and warmer forecasts for the 21st century than it did last time it was issued in 2013.
…

The 3,000-plus-page report from 234 scientists said warming is already accelerating sea level rise and worsening extremes such as heat waves, droughts, floods and storms. Tropical cyclones are getting stronger and wetter, while Arctic sea ice is dwindling in the summer and permafrost is thawing. All of these trends will get worse, the report said.

END_OF_DOCUMENT_TOKEN_TO_BE_REPLACED

In a reasonably healthy society one would expect life expectancy to rise or at least approach a plateau as the limits to which we can extend life (assuming that there is a limit) get reached. Dropping life expectancy should be a source of serious concern since it implies that something is seriously out of whack. So the recent dramatic drop in life expectancy in the US has to be a cause for alarm. 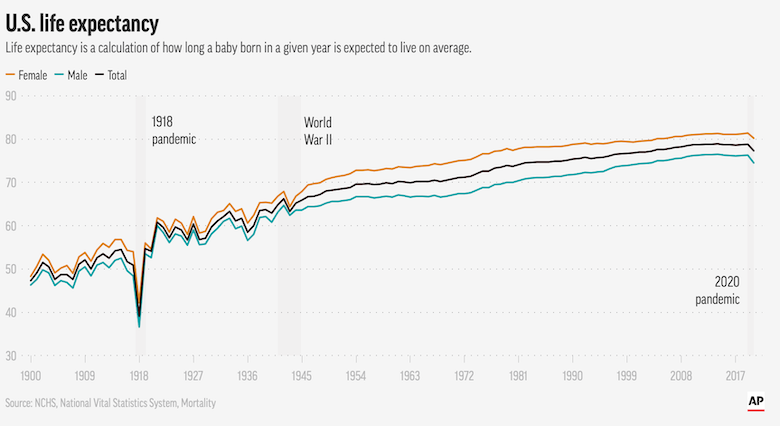 END_OF_DOCUMENT_TOKEN_TO_BE_REPLACED

Diving, like gymnastics, involves a lot of acrobatics in the air and it takes place too quickly for me to be able to judge it in real time, which tells you something about how difficult it must be to judge the event. The only indicator I have for how good it is at the very end. In the case of gymnastics, it is the landing. In the case of diving, it is how small a splash the diver makes upon entry into the water. In the Tokyo Olympics Chinese diver Quan Hongchan broke all manner of records with her gold-medal winning performance. Even an ignorant observer like me could tell that she was spectacular.

END_OF_DOCUMENT_TOKEN_TO_BE_REPLACED

A couple of weeks ago, I wrote about how Bernie Sanders handled an interview with New York Times columnist Maureen Dowd, where he managed to force her to deal with serious issues instead of the superficialities that are her forte. After writing it, it struck me that Dowd had not crossed my mind for a long time. I do not subscribe to the New York Times and never seek out their opinion columnists though once in a while I will read an article if a link comes up to their work that looks interesting. It has been ages since I came across any mention of Dowd. But she is not alone in being ignored. There was a time when regular opinion column writers like Dowd, David Brooks, George Will, Thomas Friedman, the late Charles Krauthammer, Richard Cohen, and the like would be referred to by others as sages or barometers of some issue. Now they seem to be largely ignored.
END_OF_DOCUMENT_TOKEN_TO_BE_REPLACED

On his show Last Week Tonight, he points out the surprising fact that in the US, emergency medical services, the ambulances and the medical technicians who come in an emergency and treat and transport people to hospitals, are not classified as essential services in the communities they serve, and as a result the workers are paid very poorly and lack benefits despite being hailed for their life-saving work.

More disturbingly, private equity firms are now moving in and taking over some of the private companies that provide these services, which usually means that they will be stripped of assets, workers will be treated even worse, and prices will rise.

This is the madness that results when health care is privatized.

My family knows that they should never buy me any gifts for my birthday, Father’s day, Christmas, or any other occasion. The reasons are simple. Some gift giving traditions are purely driven by commercial considerations to benefit businesses and I do not want to be part of this mindless consumption. I also do not see the point of giving gifts to adults who can well afford to buy anything they need or want for themselves. I also know that it is very hard to buy a gift for me because the things that I might like are very unlikely to be guessed by even those close to me because my wants are few and highly specialized. I hate getting clothes and books because I know that there is a 99% chance that I will not wear those clothes or read those books.
END_OF_DOCUMENT_TOKEN_TO_BE_REPLACED

We are now in the third, fourth, or fifth wave of the pandemic in the US, depending on who’s counting. What is undeniable is that following an average low of around 80,000 weekly cases on June 22, we have now reached about 640,000 cases, an eightfold increase. Death rates reached a low of 1,500 on July 5th and have started rising since then, following the expected pattern of death rates lagging infection rates by about two weeks. Almost all this rise is among the unvaccinated and these people tend to be concentrated in places where there is a high level of vaccine hesitancy and outright resistance, mostly in Republican-dominated areas. But there are encouraging signs that those people who have been vigorously campaigning against vaccines and masks and other measures to combat the pandemic are losing the battle.
END_OF_DOCUMENT_TOKEN_TO_BE_REPLACED

More of my kind of humor.