Good morning from the arachnid meetings! I had a busy day yesterday, soaking in new knowledge and trying to absorb it, and boy is my brain tired. This is a whole new experience for me.

When I go to zebrafish meetings, there is one thing you know for sure: everyone is going to be working on pretty much the same highly inbred organism, raised in similar sterile institutional environments, and when there’s a subtle difference in some individuals, everyone wants to jump on it and dissect out the causal mechanism. These meetings are…the opposite of that. The exact opposite. Everyone is confronting this massive diversity of form and species, and diverse forms within species, and trying to map it out without recourse to stuff I would have thought routine. You’ve got some oddball individual? Cross it with others, clone it, breed it up into a large working population, figure out what genes are involved. Grind it up, sequence it, tell me what nucleotides are responsible.

You can’t do that when trying to puzzle out a few hundred species living in natural environments, and it’s not even the approach most people want to take. Yesterday I got to sit through lots of taxonomy talks where the number of claws on the foot of 1800 species (or is it 800 species? Depends on who did the naming) there are. I’m left wondering whether all of this is allelic, or even just developmental noise, and no one is even looking at that aspect of the problem, because they can’t. They’re just drowning in data.

I think the answer is that we’re going to have to train an army of 10,000 arachnologists, give each of them multi-million dollar grants for the indefinite future, and turn them loose. The problems are so big that that’ll give them a reasonable start.

Oh, also, most of yesterday seemed to be talking about Opiliones, non-spider arachnids. The fact that this was an arachnology meeting, not limited to mere spiders, was thrust into my face repeatedly. Fine. I’m here to learn stuff I don’t know, so go ahead, throw all the exotic arthropods at me willy-nilly.

There were a few talks that fell into my comfort zone. There was some stuff on sex determination pathways in Parasteatoda tepidariorum, all preliminary, but with enough connections to known pathways in Drosophila and mice that I could see roughly where it was going and where interesting surprises would lurk. There was a long session on nothing but circadian rhythms in diverse spider species that had me wondering lots of things, like why there aren’t a hundred labs working on this one problem.

Spider circadian rhythms are freakishly weird, unlike what you see in other animals. The endogenous rhythm is wildly variable in different species, some running on a 16 hour clock, others on a 29 hour clock. That’s part of the opportunity in spiders — so many species, and you can just toss one in a testing apparatus and get lots of data. They also exhibit different patterns when free-running, sometimes changing their periodicity. They just don’t care about phase shifts, recovering with surprising rapidity from jet lag. Everyone is trying to figure out why they’re so different from other animals; I’m thinking maybe the answer is simple, that they’re uncoupled from any need to maintain a rhythm, and that what we’re seeing here is the vestiges of an evolutionary relic that’s being retained for its coupling with other pathways, but that doesn’t really do anything for a circadian clock anymore. It’s a lot of broken clocks, all broken in different ways.

But what do I know? Put more experts to work on the molecular signaling pathways in spiders, I say.

Today is more of the same strangeness — the whole morning is dedicated to silk. That’s another phenomenon unique to spiders, and sure to leave me reeling. In a good way.

I think there’s also another taxonomic session coming up. I’m mainly going to that for the disruptive confusion it induces in my brain. It’s like taking random drugs all day long, although I won’t be going home with a filthy systematics habit, a little adventurousness for a week is fine.

Jacob Wohl, the right-wing dumbass who strolled through a pleasant neighborhood in Minneapolis and declared it a “no-go zone” infested with terrorists, has come out with a “documentary” about his terrifying experience. He even claimed to have received an online death threat from a gay Hispanic diversity coordinator! Except that, because he’s one of the dumbest people on the internet, he used one of his own fake accounts to send it to himself.

In the right-wing ‘documentary’ on Rep. Ilhan Omar released tonight by Jacob Wohl, Laura Loomer, and Ali Alexander, they included this screenshot of a threat they received. There's one problem: NBC News earlier reported that Jacob Wohl created the account which sent the “threat”. pic.twitter.com/phGxZJ7V3I

He reported that threat to the police! So now the Minneapolis police are looking into it as a false report of a crime. It’s kind of amazingly idiotic: he included video shots of the “threat” in his own “documentary”, and also included shots of him filing a police report. He committed a crime and recorded every step of it. He is so helpful to the police.

Even his own good pal, Ali Alexander, who accompanied him on this field trip, is now desperately distancing himself from Wohl, slamming his friend publicly.

“It confirms that he’s not operating at a level where there’s useful misinformation, but kind of stupid, vanity-filled, ego-fueled disinformation,” Alexander said. “And that won’t look good for Jacob.”

I saw the videos Alexander and Wohl made during their visit, and while he may not have been responsible for a fake police report, he certainly was an enthusiastic participant in spreading “stupid, vanity-filled, ego-fueled disinformation”. 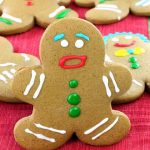 I am totally confused now. Tammy Bruce is on Fox News with Tucker Carlson arguing that gingerbread cookies are obviously male.

Tammy Bruce says cookies have a gender and "obviously they're men" pic.twitter.com/n7NWEzQrJc

So, uh…they have penises? Or Y chromosomes? Or higher testosterone levels? Those are the usual criteria these loons use to argue for the inviolability and absolute rigidity of the male/female binary. Cookies don’t have any of those.

Are they finally admitting that gender is a social construct, that in the absence of biological markers they get to dictate by convention what sex a piece of baked dough is?

Also, Tucker Carlson has been spiritually neutered. But we all already knew that.