I was reading this article with a provocative title: Cause of Cambrian Explosion – Terrestrial or Cosmic?. It set my alarm bells ringing from the title onward. 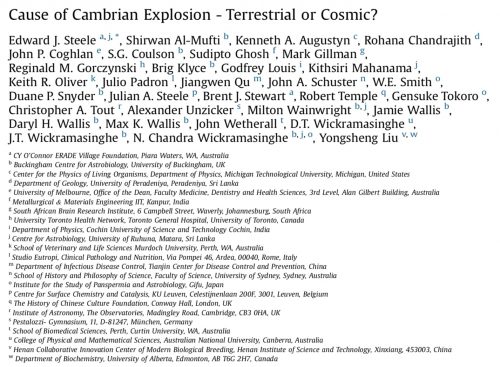 Look at those authors! So many, yet the paper itself is so empty of data. Most I don’t know. Steele I’ve heard of — he was promoting neo-Lamarckism in the 1980s, and thinks the Cambrian explosion was caused by retroviruses squirting new complex genes into the ancestors of all animals. Brig Klyce I’ve bumped into a few times on the internet…he’s a panspermia fanatic. Milton Wainwright is the guy who used an EM to look for odd blobs and declared they are evidence of alien life. The Wallis’s were part of a time that announced that diatoms came from outer space. Oh, and Chandra Wickramasinghe…yes, we have crossed paths multiple times. He published a lot in the Journal of Cosmology, with an editor, Rhawn Joseph, who really, really doesn’t like me.

Wickramasinghe has been making bank on this nonsensical idea that genes for complex intelligent life have periodically rained down on the Earth from outer space. There is no evidence for it, and no reason to invoke this random phenomenon to explain biology — we have random phenomena enough, thank you very much, and none of them have the extreme weirdness of the space virus explanation.

I guess I have heard of quite a few of the authors! And it’s a most unsavory stew of notorious crackpots.

Let’s take a look at the abstract for this gem of a paper, shall we?

We review the salient evidence consistent with or predicted by the Hoyle-Wickramasinghe (H-W) thesis of Cometary (Cosmic) Biology. Much of this physical and biological evidence is multifactorial. One particular focus are the recent studies which date the emergence of the complex retroviruses of vertebrate lines at or just before the Cambrian Explosion of ~500 Ma. Such viruses are known to be plausibly associated with major evolutionary genomic processes. We believe this coincidence is not fortuitous but is consistent with a key prediction of H-W theory whereby major extinction-diversification evolutionary boundaries coincide with virus-bearing cometary-bolide bombardment events. A second focus is the remarkable evolution of intelligent complexity (Cephalopods) culminating in the emergence of the Octopus. A third focus concerns the micro-organism fossil evidence contained within meteorites as well as the detection in the upper atmosphere of apparent incoming life-bearing particles from space. In our view the totality of the multifactorial data and critical analyses assembled by Fred Hoyle, Chandra Wickramasinghe and their many colleagues since the 1960s leads to a very plausible conclusion — life may have been seeded here on Earth by life-bearing comets as soon as conditions on Earth allowed it to flourish (about or just before 4.1 Billion years ago); and living organisms such as space-resistant and space-hardy bacteria, viruses, more complex eukaryotic cells, fertilised ova and seeds have been continuously delivered ever since to Earth so being one important driver of further terrestrial evolution which has resulted in considerable genetic diversity and which has led to the emergence of mankind.

It’s a moderately long paper, because it’s really easy to layer on thick coats of bullshit when you don’t care about the quality of the evidence. So I’m just going to look at — can you guess? — his second focus, “the remarkable evolution of intelligent complexity (Cephalopods) culminating in the emergence of the Octopus”.

There are novelties in cephalopod evolution, and I’ve written about them before. In particular, cephalopods carry out a significant amount of gene editing, that is, they use enzymes to modify a few of the bases in RNA before it is translated into protein. This is not a shocking surprise — it’s not a universal modification of every RNA, but it has been observed in phyla all across the animal kingdom — although some gullible sources claim it is a violation of the central dogma (they’re wrong). But the key thing is that it’s not unique to cephalopods, lots of organisms have the enzymes, so you can’t use it as evidence for the claim that gene editing came from outer space.

In particular, there is no reasonable justification for this claim:

Thus the possibility that cryopreserved Squid and/or Octopus eggs, arrived in icy bolides several hundred million years ago should not be discounted (below) as that would be a parsimonious cosmic explanation for the Octopus’ sudden emergence on Earth ca. 270 million years ago. Indeed this principle applies to the sudden appearance in the fossil record of pretty well all major life forms, covered in the prescient concept of “punctuated equilibrium” by Eldridge and Gould advanced in the early 1970s (1972, 1977); and see the conceptual cartoon of Fig. 6. Therefore, similar living features like this “as if the genes were derived from some type of pre-existence” (Hoyle and Wickramasinghe, 1981) apply to many other biological ensembles when closely examined. One little known yet cogent example is the response and resistance of the eye structures of the Drosophila fruit fly to normally lethally damaging UV radiation at 2537 Å, given that this wavelength does not penetrate the ozone layer and is thus not evident as a Darwinian selective factor at the surface of the Earth (Lutz and Grisewood, 1934) and see Hoyle and Wickramasinghe (1981, p.12e13). Many of these “unearthly” properties of organisms can be plausibly explained if we admit the enlarged cosmic biosphere that is indicated by modern astronomical research e discoveries of exoplanets already discussed. The average distance between habitable planets in our galaxy now to be reckoned in light years e typically 5 light years (Wickramasinghe et al., 2012). Virion/gene exchanges thus appear to be inevitable over such short cosmic distances. The many features of biology that are not optimised to local conditions on the Earth may be readily understood in this wider perspective.

We’ve gone from a few viral genes raining down on Earth and getting incorporated into life, to frozen squid eggs drifting from Alpha Centauri to Earth in icy meteors and somehow crashing into our oceans and surviving to populate the seas. I don’t think the authors understand the word “parsimonious”. If this were true, cephalopods would represent an entirely novel lineage, and more than having a few molecular novelties, they would be completely unrelated to any other animal lineage on the planet. They would not be related to other molluscs. They would not be protostomes. They would not be eukaryotes. They would be totally alien.

The authors even seem to be superficially conscious of this problem. Here is the “conceptual cartoon of Fig. 6”. 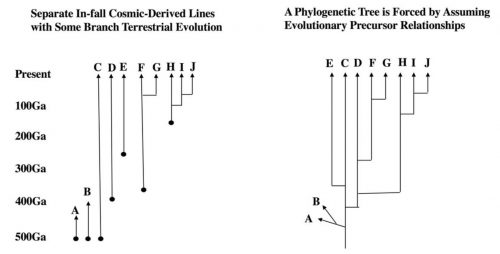 This diagram is what you get when you pretend that lineages are made solely of apomorphies, or the derived traits that distinguish each species from other organisms, and close your eyes to the plesiomorphies, or shared similarities. A phylogenetic tree is not “forced”, it is produced by identifying shared traits. The octopus has molecular similarities to snails, and the two together have similarities to other invertebrates, and all of them have shared attributes with all animals. You don’t get to just ignore all that! This is equivalent to saying that octopuses have tentacles, therefore octopuses are from outer space, completely neglecting the fact that octopuses have homologous genes linking them to insects and sea cucumbers and people.

To back up the remarkable assertion that cephalopods fell from space, they present no evidence, other than a flurry of citations of … N. Chandra Wickramasinghe. It’s an embarrassingly masturbatory display. Wickramasinghe and his associates have been churning out these useless, garbage papers for decades, and now they use the volume of shit he has produced as evidence that his shit is valid. He occasionally sprinkles in references to other authors, which he gets wrong: Stephen J. Gould would not recognize figure 6 as an accurate representation of punctuated equilibrium. This is not how science is supposed to work. It’s simply fraudulent.

Wickramasinghe used to be associated with Cardiff University — they fired him and closed his astrobiology ‘department’, which turns out to have been a bit of a Potemkin village anyway. It was run entirely by Wickramasinghe as a part-time employee, and the entirety of the staff were “honorary”, unpaid volunteers.

“All the other staff, totaling about 12, is honorary research fellows and associates who were not costing the university anything at all. They have brought a huge amount of credit to Cardiff University and so it amazed me that the university would discontinue their support for astrobiology. “What they did to me is a travesty of normal university practice and I still don’t understand the motive. I can’t believe for a moment that they are strapped for £15,000 a year to maintain a centre that has, for good or bad, a very high profile internationally. “We continue to make headlines in various things that we do. Some of our work remains controversial but it is in the nature of science to promote controversy as long as it is intelligent controversy. That’s within the rules of the game. If people agree 100 per cent what they’re doing then science becomes a bit insubstantial. “I just fail to understand why they do this. It could be ageism because, at 71, I’m over the retirement age by a couple of years, but I’ve been around for years and have published many papers. I was Sir Fred Hoyle’s longest-running collaborator from the time I was a student at Cambridge.”

Cardiff claims the closure was entirely due to budgetary reasons, but I rather suspect that, contrary to Wickramasinghe’s claim, his slack work and low standards of evidence have frequently brought discredit to the university.

Don’t cry for Chandra, though. He was snapped up by the University of Buckingham to form a “centre for astrobiology”. I think that might mean he was allowed to host a webpage on their site, because he’s never had a real research unit, and I doubt that he’s been given the funds for one now.

But yeah, if you see his name on anything, or apparently any of the names in that long list of articles, you’ve found a treasure trove of pseudoscience.

Your stereotypes are not helpful » « Omniology fails to check Snopes