Aron Ra has a new YouTube series on “Supposed Lies in the Textbooks” which addresses some of the many ridiculous claims by Kent Hovind about what is taught in the science classroom. For a guy who claims to have been trained as an educator and to have taught grade school science, ol’ Kent sure has some stupid misconceptions. For instance, Aron slaps down this remarkable claim from Hovind about molecular homology: 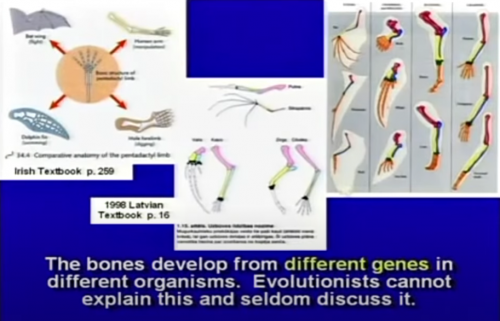 The bones develop from different genes in different organisms. Evolutionists cannot explain this and seldom discuss it.

But that’s not at all true! For instance, the evil cat and I used the same, or homologous, genes to develop the hands I use to type with, and the clawed paws she uses to slash me with. All of the diverse limbs illustrated above use a similar set of genes to build their bony cores, modulated by the same Hox genes to establish the pattern, with subtle variation in the regulation of their morphogenetic properties. It’s simply a lie that limb bones develop from different genes in different organisms, which is why biologists don’t discuss it.

Yet there are still people who treat Hovind as a reliable source — I know of several local churches here in West Central Minnesota who are happy to show kids those videos. I guess that’s why some of us are still trapped in the endless morass of having to explain that a liar lies.