I can think of a few other scumbags from that era whose demise would prompt me to break out the Macarena, too.

There was a bit of a shock recently when Science-Based Medicine published a positive review of Abigail Schreier’s godawful conservative anti-trans book, Irreversible Damage, by Harriet Hall. It was surprising that such poor science could get a good review on a usually reliable science site, especially when the typical review pans it as “full of misinformation”.

Good news, though: Hall’s terrible article has been yanked from the site (don’t worry, Freezepeachers: it’s still available on Michael Shermer’s wacky libertarian skeptic site), and now Novella and Gorski have written a strong rebuttal. Here’s just their conclusion, and they also promise some further details in follow-up articles.

Abigail Shrier’s narrative and, unfortunately, Dr. Hall’s review grossly misrepresent the science and the standard of care, muddying the waters for any meaningful discussion of a science-based approach to transgender care. They mainly rely on anecdotes, outliers, political discussions, and cherry-picked science to make their case, but it is not valid.

Most significantly, they warn about medical interventions for children, citing mainly the notion that children are not able to make such choices at such a young age and will likely change their minds, regretting their decision because their gender identity is still developing. However, the age group for which they cite (fatally flawed) statistics do not receive medical interventions, and the age group that is eligible are not likely to change their gender identity. This is a statistical bait-and-switch.

The standard of care waits until children are at an age where their gender identity is generally fixed, and then phases in interventions from most reversible to least, combined with robust psychological assessments. Further, regretting these interventions remains extremely rare, and does not support the social contagion hypothesis.

At this point there is copious evidence supporting the conclusion that the benefits of gender affirming interventions outweigh the risks; more extensive, high-quality research admittedly is needed. For now, a risk-benefit analysis should be done on an individual basis, as there are many factors to consider. There is enough evidence currently to make a reasonable assessment, and the evidence is also clear that denying gender-affirming care is likely the riskiest option.

I suspect that, like Freethoughtblogs, SBM gives their writers considerable autonomy, since they can generally trust everyone in their group. Every once in a while, though, something yucky will slip through, and then you have to do some retroactive peer review. I’ve been there. We’ve had a few dramatic incidents here, too. In this case, they announce that “Dr. Hall still remains an editor of SBM in good standing”. Here’s where we differ — if someone on FtB published something like that, there’d be a week or two of shrill in-house and public battles before the offending writer got the boot.

I only got 13 live babies out of that one hatching, which is sad and pathetic. I’m clearly going to have to go on an Egg Sac Hunt this weekend to get more.

I describe this feeble output on Patreon, with photos of the unproductive wreck of an egg sac. I’ve also put a picture of one of the healthy offspring on Instagram. And, oh yeah, on Discord. Why aren’t you on our Discord server? It’s free!

It’s the last day of the American Arachnology Society meeting. Have you ever experienced this? You’re simultaneously looking forward to many of the talks, but you’re also really looking forward to ending the deluge of information and getting back to normal? Yeah, brain overload is terrible. But at least with a virtual conference I don’t have to pack up and get on a plane and drive for half a day, and I won’t lose a few more days to con crud.

Also, now this morning I have to find time to sort babies into vials. That’s my agenda: glue eyes to microscope and delicately shoo baby spiders into new containers, then rush back to glue my eyes to a computer screen to attend to a couple of hours of webs and venom (the subjects of the first two blocks of talks today.)

You can’t fully appreciate how cute baby spiders are until you see them toddling about in a home movie.

Remember when I said I was preggers, and that I had a little transparent container on my desk I was watching? Yesterday I had noticed that the mama spider was rather agitated, and was fussing about with her egg sac, and I was getting worried that something was going wrong. I shouldn’t have worried! This afternoon while I was watching the AAS talks, I noticed some new tiny little dots near the sac — the babies have emerged! They are very cute. You’ll have to check them out on Instagram!

Maybe too accurate for comfort. 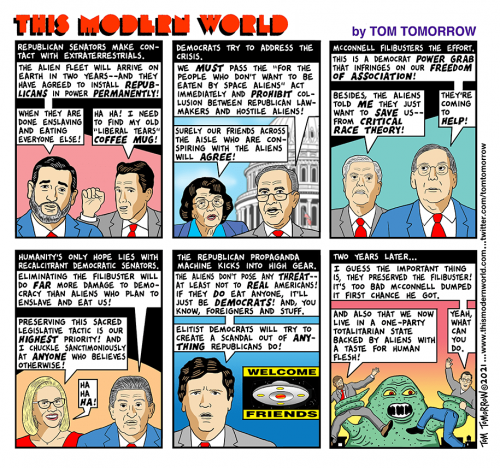 I gave a talk titled “The Biology of Intelligence” on Sunday to the Atheists of Florida. It went OK, I think, with some of the familiar problems of Zoom talks. I sound a bit like a Dalek at times, and early on I had a catastrophic crash — my computer went down hard and I had to restart it all — but we muddled through.

I’m not a fan of the concept of “intelligence” — it’s something we can’t define and can’t even objectively measure, yet we seem to be comfortable saying that one species is more intelligent than another. A lot of the biology research seems to be contrived towards finding morphological correlates that align with our intuition, which is just plain bad science. Maybe I just don’t trust it because nobody ever intuits that spiders are the smartest species on earth.

The Tuesday schedule from the American Arachnology Society meeting:

I’m really looking forward to the plenary, and I know there will be lots of good stuff in the contributed talks, but boy, those were fatiguing yesterday. Also one session did not keep very good time, went way overlong, and rode right over the one break. Hey, coordinators, it’s really important to keep everything on time, otherwise when am I going to get to void all the coffee I was drinking through the meeting?

Also, the informal evening sessions are useful for us amateurs. I’m planning to sit in on the spider husbandry happy hour.

I have to disagree with xkcd a little bit. 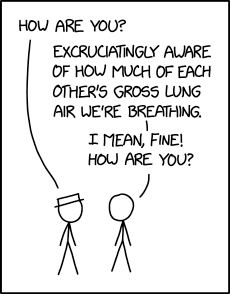 The problem is with not learning enough about biology. Once you know enough, you appreciate that the whole of your existence is wallowing in a cloud of everything and you might as well accept it — we’re all interconnected and part of the whole. Then, once you know too much, you find yourself wondering if your wife would mind if we invited a swarm of spiders to join us for a dinner date.

I made a graph. 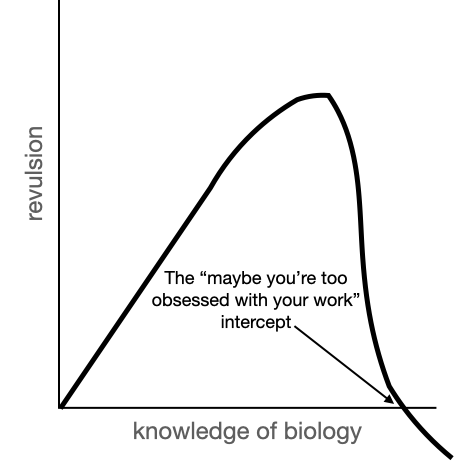