It’s become a common refrain that what modern evangelicals do is not true to the spirit of Christianity, that it’s somehow a betrayal of Jesus’s message. Here’s a fine example of that kind of apologetics. 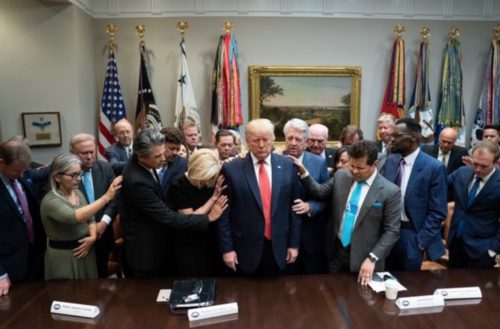 We need to be really clear on something, because there seems to be confusion out there lately:

They may use the word and steal the iconography and cop the aesthetic, but that is where the resemblance diverges and where the similarities end. There remain no other commonalities with which to rightly associate the two.

It is spiritual misappropriation: the violent hijacking of something helpful and weaponizing it in order to do the greatest amount of damage in the shortest amount of time. It is a hostile takeover of something beautiful and grossly disfiguring it to terrorize people with.

Then there’s the usual quoting of the Beatitudes, yadda yadda yadda. Fine. I like the attitude. I too would like to see a Christianity that followed principles of love and charity, and sure, there is stuff written in the Bible that supports that view. Of course, there is also stuff in the Bible that advocates murder and war, tribalism, misogyny, homophobia, and all kinds of cultish behavior. Cherry-picking can be a good approach when you’ve got a contradictory mess like all these holy books, so keep it up, positive Christians! The cafeteria is open, you don’t need to eat everything that’s dished out!

But I would also point out that finding some nice words in a book is not sufficient to describe what people do. The KKK will kindly inform you that they’re just about securing the existence of their people and a future for white children, and isn’t that nice? The Nazis loved “Kinder, Kuche, Kirche“, good old fashioned values of home and hearth. If you just quote that, you could say they were good Volk, and the atrocities weren’t really representative.

The good Volk in that photo above can also quote the Bible and will eagerly profess their devotion to their Lord and Savior, Jesus Christ, and will take communion and pray regularly and sing Christian hymns and baptize their children and go to their grave confident that they will be resurrected in heaven. They are Christians. Definitely Christians. They sure as fuck aren’t atheists, and many of them hate Muslims and Hindus, so what else could they be? They are bad people with twisted values, but perfectly Christian all the same. Rebuke them for their betrayal of human decency, not for their flavor of Christianity.

By the way, speaking of hijackings…love and charity and cooperation and art and music and childhood and niceness are all entirely human properties, and I rather resent it when someone clasps their holy book to their bosom and suggests that these things come from their god…or at least, their version of a god as correctly interpreted by their version of a church.

Guess what my best beloved brought to me? » « What happened to our brave, bold horsemen?