Rex Huppke has your number, fragile little men. What’s with all the bold brave conservative guys rushing to demand satisfaction for being called mean names?

…following news there was an outbreak of bedbugs in the New York Times newsroom, David Karpf, an associate professor of media and public affairs at George Washington University, jokingly tweeted: “The bedbugs are a metaphor. The bedbugs are Bret Stephens.”

Hardly anyone saw the tweet, as the professor at that point had few Twitter followers. But Stephens saw it — and it hurt his feelings. So much so that he sent an email to Karpf and the university’s provost, writing: “I would welcome the opportunity for you to come to my home, meet my wife and kids, talk to us for a few minutes, and then call me a ‘bedbug’ to my face.”

Stephens was clearly trying to leverage his status as a Times columnist to get Karpf in trouble, all because he was mad the professor called him a bedbug. So much for Stephens’ worries about “the job security of professors.”

Jesus. Stephens writes opinions on one of the most prominent media platforms out there, and further, he’s one of the most despised conservative extremists at the NYT, and he lashes out at a mild insult? Try being a woman expressing a preference for a movie to her few followers on Twitter. She’ll get a thousand times the rage that Stephens gets, and she’ll deserve it far less. She’ll probably deal with it with far more equanimity than Bretbug. (He really is verminous pest who ought to be steamed out of the press, anyway.) 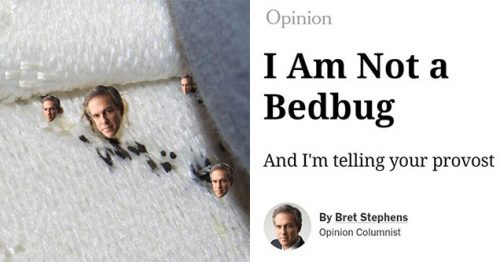 I’m humblingly low on any kind of media ranking, but I get constant, substantial harassment. The biggest noise was when Stuart Pivar tried to sue me for $15 million, or Michael Shermer blustering and threatening and sending me cease & desist letters, but I also get constant attempts to get me fired — remember Comma, the Sovereign Citizen who was dunning the board of regents with conspiracy theories? There are lots more examples of that kind of thing that I haven’t even bothered to mention. Another thing I don’t mention: over the years, there have been multiple instances of people setting up Pharyngula parody blogs, or even more petty, blogs that no one reads that attempt to rebut every post I put up. These are usually created by disgruntled ex-commenters who got banned, and have to express their resentment. Yeah, I get called worse than “bedbug”. I don’t care. I know these things will fade away in time.

And, of course, I’m getting sued by Richard Carrier for daring to investigate accusations of sexual harassment against him. You’d think, if he were confident that the accusations were false, that the appropriate reaction would be to welcome an investigation, but no — he lashed out with a set of absurd lawsuits against multiple people.

I know from experience. It turns out that poking your head up and criticizing the status quo will draw out swarms of delicate little flowers (strangely, all men so far) who will try to destroy you, often while piously declaiming the importance of Free Speech out of the other side of their mouth. Bret Stephens is just the latest, most prominent example of white male fragility. Would you believe he’s even comparing himself to persecuted Jews in Nazi Germany because a college professor called him a bedbug?

My jaw is on the floor pic.twitter.com/repnmcL2Ud

Maybe I’ve been underestimating my power. They wouldn’t be trying to suppress me if I were harmless, after all.

P.S. I may be an immensely dangerous college professor, but I still need help. There is a group of us being currently sued, and we need donations to cover the legal costs. If you can help out, we’d appreciate it!

P.P.S. The next big event in that case is September 24th, in a Minneapolis court. I’m not sure where or what time yet, but I’ll let you know when it gets closer, in case anyone wants to show up and listen to our lawyer orate eloquently.

P.P.P.S. Will no one think of the bedbugs?