A teenaged boy — I’d say he even looked “angelic” — slapped the back of the despicable Fraser Anning’s rotten head with an egg. He was a brave young man. Not only did he give Anning a small taste of what he deserves, but he stood his ground as the Australian senator punched him twice, and as his crack team of thugs wrestled the unresisting assailant to the ground and put him in a chokehold. You never know, he might have a second egg somewhere, or a high capacity egg magazine, or an assault egg. You can’t be too careful.

This is the moment an egg is cracked on the head of Australian senator Fraser Anning.

He's been caught in a row after appearing to blame the New Zealand mosque attack on Muslim immigration https://t.co/0mSwlQLfCt pic.twitter.com/Aa0et8ucP3

I had to use the word “angelic” to describe him, since the newspapers are doing their usual thing of looking into people’s backgrounds after a crime and trying to paint white people as innocent sweethearts right up until the moment they did the thing. The Daily Mirror has a feature on the childhood of the fucking asshole murderer who killed 49 innocent people in a mosque, and look what they say: 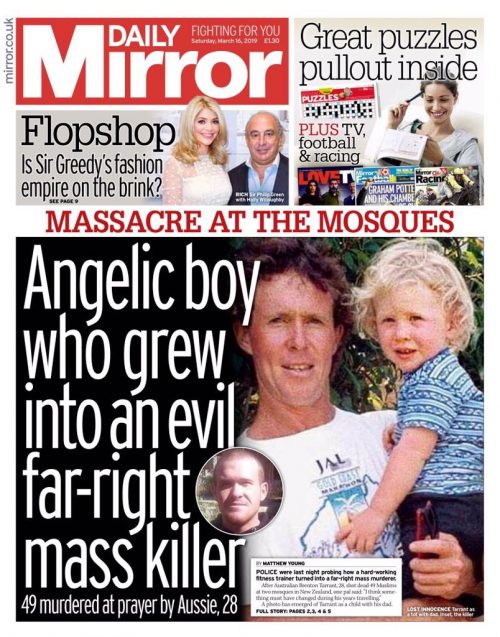 “Angelic boy” — my god, he’s blonde. As everyone knows, all angels are blonde and white-skinned, too, so how could such a sweet child grow up to be a terrorist?

I’m just thinking…there are a lot of blonde white people in Iowa, and as a rural state, a lot of chickens, too. It would be a real shame if Steve King were pelted with eggs at his next public event.

39 » « A new answer to the Fermi Paradox, which is not a paradox, and doesn’t need an answer anyway