In a mildly interesting discovery, a toe bone from a 1.7 million year old hominin has been found to bear an osteosarcoma. The poor individual would have been suffering with pain when they walked, it might even have killed him (not the toe, but the possibility of metastatic cancer) and it’s suggestive that there might have been some social care for them. 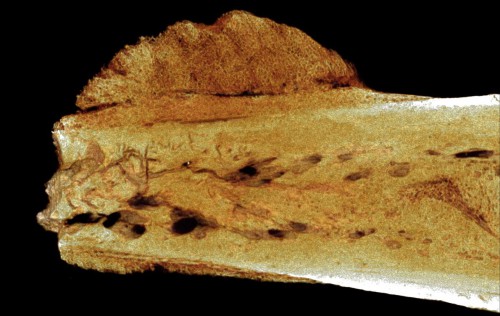 But you know what’s not interesting at all? That cancer has been around for millions of years. That’s old news.

The precise origins of cancer have been a source of debate due, in part, to the scarcity of historical evidence. Possibly the earliest reference to the disease is attributed to the great Egyptian physician Imhotep, who lived around 2600 B.C. In his writings, Imhotep describes an affliction characterized by a “bulging mass in the breast” that was resistant to any known therapies.

That an old mammal got cancer is not surprising at all. And while the subtitle might claim that the observation “could have important implications for modern medical research”, the article doesn’t say what those implications are. It can’t, because there aren’t any.

I just find myself annoyed that here is a thought-provoking but ultimately anecdotal datum that humanizes our distant ancestors and might have some implications for the history of human social behavior, but it’s getting shoe-horned into the trite and pragmatically false paradigm that it’s a discovery that could lead to the Cure for Cancer. Stop the hype, please.

Are we a nation of two year olds? » « Could someone tell Bill O’Reilly the first rule of holes?