He’s doubling down on his slavery remarks. 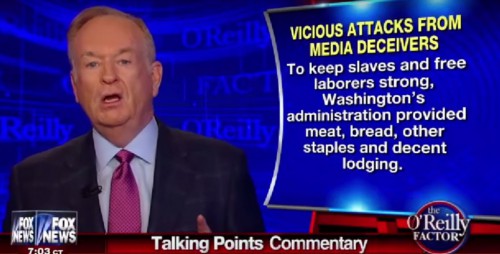 He’s also freaking out with paranoia. He invited a couple of his odious pals — Geraldo Rivera and Eric Bolling — to whine at each other in their very own little safe space (on Fox News!) about how persecuted they are by liberals who want them dead.

I don’t want them dead. I’d be content if they were fired for incompetence and I never heard from them again.

What’s also annoying is that they keep patting O’Reilly on the back and telling him he’s a “historian”. He’s not. He’s a hack who has a ghost-writer churning out conspiracy theory books that he slaps his name on. I like this comment: “History isn’t just a word, it’s a discipline“. O’Reilly isn’t qualified to use it.

If he were a historian, he’d know that Abigail Adams wrote about the slaves building Washington DC.

it is true Republicanism that drive the Slaves half fed, and destitute of clothing…whilst the owner waches about Idle, tho his one Slave is all the property he can boast, Such is the case of many of the inhabitants of this place.

Not much has changed, I guess.

I also rather like this paraphrase of O’Reilly’s claim.

"Slaves were beaten, tortured and raped with impunity. Their children were sold for money. Slaves were well-watered."

Never forget: they were slaves, with all the deserved horror that word evokes. Americans stole people’s freedom and dignity and used them for profit.

Which is also a nice summary of modern Republicanism.