I’m going to tell you about a paper that was brought to my attention by some poor science journalism, so first I have to complain about the article in the Guardian. Bear with me.

This is dreadfully misleading.

Though everybody’s face is unique, the actual differences are relatively subtle. What distinguishes us is the exact size and position of things like the nose, forehead or lips. Scientists know that our DNA contains instructions on how to build our faces, but until now they have not known exactly how it accomplishes this.

Nope, we still don’t know. What he’s discussing is a paper that demonstrates that certain regulatory elements subtly influence the morphology of the face; it’s an initial step towards recognizing some of the components of the genome that contribute towards facial architecture, but no, we don’t know how DNA defines our morphology.

But this is disgraceful:

Visel’s team was particularly interested in the portion of the genome that does not encode for proteins – until recently nicknamed “junk” DNA – but which comprises around 98% of our genomes. In experiments using embryonic tissue from mice, where the structures that make up the face are in active development, Visel’s team identified more than 4,300 regions of the genome that regulate the behaviour of the specific genes that code for facial features.

These “transcriptional enhancers” tweak the function of hundreds of genes involved in building a face. Some of them switch genes on or off in different parts of the face, others work together to create, for example, the different proportions of a skull, the length of the nose or how much bone there is around the eyes.

NO! Bad journalist, bad, bad. Go sit in a corner and read some Koonin until you’ve figured this out.

Junk DNA is not defined as the part of the genome that does not encode for proteins. There is more regulatory, functional sequence in the genome that is non-coding than there is coding DNA, and that has never been called junk DNA. Look at the terminology used: “transcriptional enhancers”. That is a label for certain kinds of known regulatory elements, and discovering that there are sequences that modulate the expression of coding genes is not new, not interesting, and certainly does not remove anything from the category of junk DNA.

Alok Jha, hang your head in shame. You’re going to be favorably cited by the creationists soon.

But that said, the paper itself is very interesting. I should mention that nowhere in the text does it say anything about junk DNA — I suspect that the authors actually know what that is, unlike Jha.

What they did was use ChIP-seq, a technique for identifying regions of DNA that are bound by transcription factors, to identify areas of the genome that are actively bound by a protein called the P300 coactivator — which is known to be expressed in the developing facial region of the mouse. What they found is over 4000 scattered spots in the DNA that are recognized by a transcription factor. A smaller subset of these 4000 were analyzed for their sequential pattern of activation, and three of these potential modulators of face shape were selected for knock out experiments, in which the enhancer was completely deleted.

The genes these enhancers modulate were known to be important for facial development — knocking them out creates gross deformities of the head and face. Modifying the enhancers only leaves the actual genes intact, so you wouldn’t expect as extreme an effect.

One way to think of it is that there are genes that specify how to make an ear, for instance. So when these genes are switched on, they initiate a developmental program that builds an ear. The enhancers, though, tweak it. They ask, “How big? How high? Round or pointy? Floppy or firm?” So when you go in and randomly change the enhancers, you’d expect you’d still get an ear, but it might be subtly shifted in shape or position from the unmodified mouse ear.

And that’s exactly what they saw. The mice carrying deletions had subtle variations in skull shape as a consequence. In the figures below, all those mouse skulls might initially look completely identical, because you aren’t used to making fine judgments about mousey appearance. Stare at ’em a while, though, and you might begin to pick up on the small shifts in dimensions, shifts that are measurable and quantifiable and can be plotted in a chart. 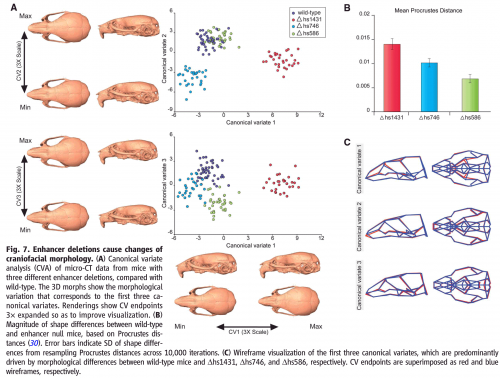 This is as expected — tweaking enhancers (which are not, I repeat, junk DNA) leads to slight variations in morphology — you get funny-looking mice, not monstrous-looking mice. Although I shouldn’t judge, maybe these particular shifts create the Brad Pitt of mousedom. That’s also why I say that implying that we now know exactly how DNA accomplishes its job of shaping the face is far from true: Attanasio and colleagues have identified a few genetic factors that have effects on craniofacial shaping, but not all, and most definitely they aren’t even close to working out all the potential interactions between different enhancers. You won’t be taking your zygotes down to the local DNA chop shop for prenatal genetic face sculpting for a long, long time yet, if ever.