I don’t go to church on Sundays anymore, so it’s so kind of the New York Times to serve me up a bit of that familiar sanctimonious, self-congratulatory bullshit from a guy named Eric Weiner. Weiner is a smug member in good standing, he thinks, of that demographic called the Nones: people who don’t belong to a church, but maybe believe in a higher power. Or maybe not. It’s a broad catch-all category, so their beliefs are hard to categorize.

All I can say is that if Eric Weiner is at all representative, a lot of Nones are idiots.

For a nation of talkers and self-confessors, we are terrible when it comes to talking about God. The discourse has been co-opted by the True Believers, on one hand, and Angry Atheists on the other. What about the rest of us?

I believe xkcd has already addressed this attitude. 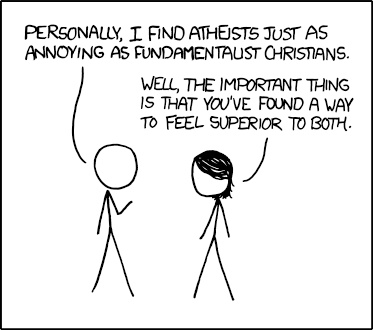 I can also quote myself: “squatting in between those on the side of reason and evidence and those worshipping superstition and myth is not a better place. It just means you’re halfway to crazy town.”

I must also point out that Weiner is making a common mischaracterization of atheists: we aren’t sitting around fuming at the world, and we’re not primarily angry. Most of us are pretty damned happy with the universe (or at least, aware of reality), and we mainly get angry at denialists and fools — people with whom we should be angry — and if you aren’t pissed off at people who set environmental policy by the backward whims of their bible, or who deny civil rights to people because they don’t like their private behavior, or who vote for political candidates on the basis of how loudly pious they are, then there is something wrong with you.

And yes, there is something wrong with Eric Weiner.

Nones are the undecided of the religious world. We drift spiritually and dabble in everything from Sufism to Kabbalah to, yes, Catholicism and Judaism.

He says that like it’s a good thing. Does he even realize that these are mutually antagonistic religious views? Does he care that they say very different things about the nature of the universe? Nah. Here’s the heart of Weiner’s essay:

We Nones may not believe in God, but we hope to one day.

The atheists he doesn’t like have a better answer: we will embrace reality, whatever it is. And we will work to discover that truth, not bury it because we have a fantasy we like better.

Weiner’s concluding solution is so oblivious to history that I read it with disbelief. How does something this stupid get into the pages of the New York Times? (I know, it’s incredibly common, but it’s just so annoying.)

What is the solution? The answer, I think, lies in the sort of entrepreneurial spirit that has long defined America, including religious America.

We need a Steve Jobs of religion. Someone (or ones) who can invent not a new religion but, rather, a new way of being religious. Like Mr. Jobs’s creations, this new way would be straightforward and unencumbered and absolutely intuitive. Most important, it would be highly interactive. I imagine a religious space that celebrates doubt, encourages experimentation and allows one to utter the word God without embarrassment. A religious operating system for the Nones among us. And for all of us.

Guess what, Mr Weiner? They’ve made god an even greater embarrassment.

I have a better idea. Instead of inventing yet another religion designed to make the gullible feel good about themselves, how about if we grow up, shed the superstitious preconceptions, and instead strive to see the truth about nature? How about if we all become atheists?

Why I’m An Atheist – Mike Bermudez » « Another appearance tonight